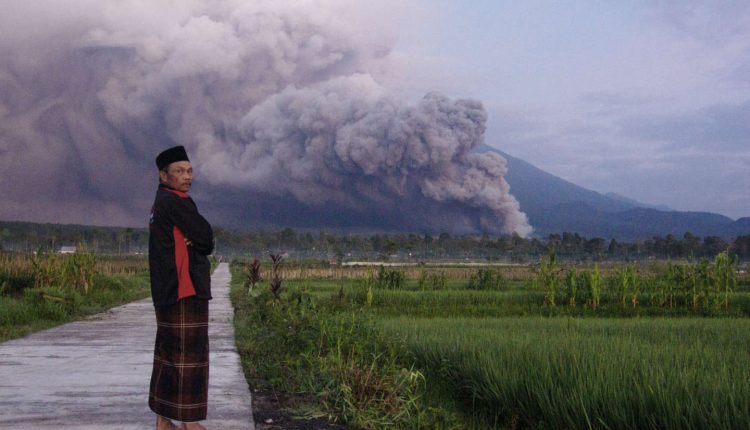 On the island of Java in Indonesia, the Semeru volcano erupted on Sunday December 4, a year after a deadly disaster. The Center for Volcanology and Prevention of Geological Disasters (PVMBG) has decided to raise the alert level of Mount Semeru from level three to level four, the highest. “This means that danger threatens populated areas and that the activity of the volcano has intensified”explained his spokesperson, Hendra Gunawan, to the Kompas TV channel.

Located in the east of the island of Java, of which it is the highest point, with an altitude of 3,676 meters, Mount Semeru spat an ash cloud about 1.5 km high on Sunday. No casualties were reported immediately after the eruption, but Mr Gunawan advised nearby residents to stay at least 8km away from the crater.

Authorities also asked people to avoid a 13 km long area along a river, towards which the volcanic ash cloud was moving. Shelters have been set up to house displaced people, and authorities have distributed masks to nearby residents to protect them from air pollution from the ash.

Read also: Article reserved for our subscribers Jakarta, the doomed capital of Indonesia

Warning of tsunami risk in Japan

Videos circulating on social media showed plumes of smoke rising from Mount Semeru and at least one village covered in ash and bathed in a dark mist. After the eruption, the Internet was cut and the mobile telephone network was faulty, according to a journalist from Agence France-Presse (AFP).

For its part, the Japanese Meteorological Agency warned of a possible tsunami, caused by the eruption of the Indonesian volcano, around 6:30 a.m., in the islands of Miyako and Yaeyama, in the extreme south of the archipelago. Japanese, according to the Kyodo news agency. An hour later, however, no damage had been reported.

The last eruption of Mount Semeru, in December 2021, killed at least 51 people. Mudslides and ash engulfed entire villages and nearly 10,000 people had to flee their homes. Indonesia sits on the Pacific Ring of Fire, where the meeting of continental plates causes strong volcanic and seismic activity. The Southeast Asian archipelago has about 130 active volcanoes.