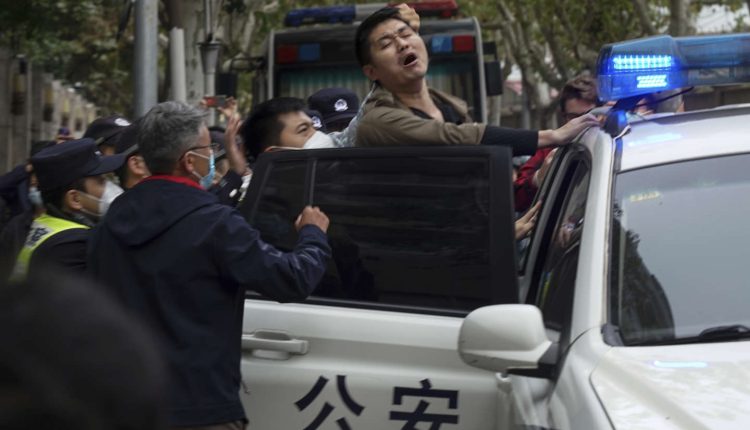 When he recounts his thirty hours spent at the police station, James (a pseudonym) struggles to calm his slender fingers torturing his cup of coffee. The young man, in his 20s, was leaving a nightclub around 3 a.m. on Sunday, November 27, when he decided to join the demonstration which had formed in the center of Shanghai, in tribute to the ten victims of a fire. in a confined residence in Xinjiang’s capital, Urumqi. Two hours later, when the crowd dispersed, James was arrested, along with dozens of other protesters. He still trembles when he recounts the hours spent standing in front of a wall, the barking of police officers, who force him and other detainees to undress completely, then the homophobic remarks he receives. He still has not recovered his smartphone, kept by the police “for investigation”like that of hundreds of demonstrators.

After the night of claims, China deployed a security arsenal both human and technological to prevent such a gathering from happening again at all costs. Without preventing other more modest political rallies, in Beijing for example, or the outbreak of protests against local confinements, such as in Guangzhou (Canton). In Shanghai, the commemoration of the victims of the Urumqi fire, with a few candles and bouquets of flowers, quickly turned into a demonstration against the zero Covid policy and more broadly against the authoritarian power of the Chinese Communist Party. If the police showed restraint in the face of this crowd of hundreds of people on the night of the 26th to the 27th, the account of James and other demonstrators arrested gives an idea of ​​the methods used to intimidate them.

Arrived on the spot, around 3 a.m., James does not hear the most controversial slogans: a little earlier, songs denouncing health policy had given way to calls for the resignation of the Chinese leader, Xi Jinping, and the fall. of the Communist Party. “I saw on the internet, after the fact, that more radical slogans were sung against the president, but I did not hear them: I just shouted against the zero Covid policy, the confinements and also for the freedom of ‘expression “, he specifies.

Around 5 a.m., as many returned home, the police made arrests. “We found ourselves in the center of a group that the police were targeting, a friend was thrown to the ground, I had the instinct to pick him up and pull him towards me. But I didn’t see that there was a policeman behind me too. » James is first pushed into a police minivan with others. They are transferred to a first police station, which is already overflowing with demonstrators, then to another.

You have 60.15% of this article left to read. The following is for subscribers only.