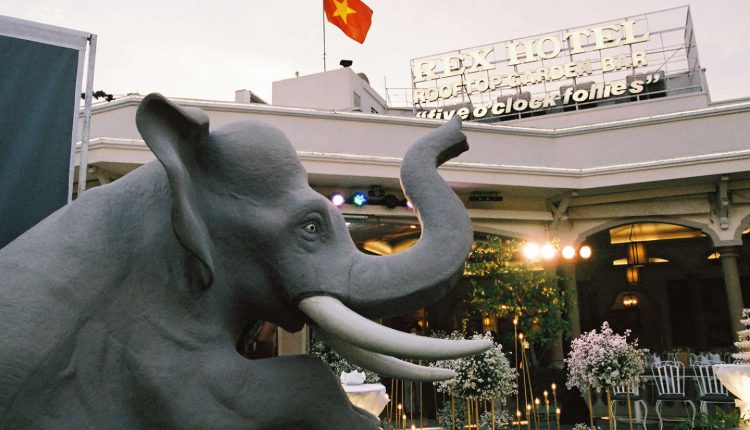 After the monsoon shower, the evening is mild on the roof terrace of the Rex Hotel. From here, the thousands of scooters backfiring down Nguyên-Huê Street form a bearable noise. With its illuminated crown in the middle of two gray plastic elephants, its bamboos in the pots and its wrought iron chairs, the bar-restaurant seems from another era. From the time perhaps when Ho Chi Minh City was still called Saigon.

Foreign tourists are still few after the borders reopened on March 15 after the peak of the pandemic. Wealthy Vietnamese make up the bulk of the clientele. This Saturday evening in May, they have a romantic dinner, share a meal with colleagues or celebrate birthdays against a backdrop of Spanish romances and local techno-pop tracks, chosen by two young female DJs.

“The presence of Americans and journalists at the Rex before the liberation is history, so it’s good for marketing and business. » Tao Van Nghê, former hotel manager

Above the terrace shines a sign: “Five O’clock Follies” (“the follies of five hours”). Title of an old musical from the beginning of the XXe century, the name of the hotel bar refers to the armed conflict that destroyed the country between 1964 and 1975. Journalists had thus nicknamed the press conferences that the American general staff held every day at the Rex, around 5 p.m. A way to mock these briefings which lined up half-truths and carefully selected facts, to give the impression that the United States was winning the war. Since then, the expression has flourished in the Anglo-Saxon media, whether it is to criticize the veracity of official information on the first Gulf War or the outings of Donald Trump estimating the Covid-19 pandemic. “very much under control”.

Contrary to what some articles have claimed, these “Follies” were not held on the roof, but on the ground floor. Even if he was misled by the Internet which peddles this false information, Tao Van Nghê, director of the hotel from 2010 to 2015, is proud to have unearthed the expression to baptize the bar – and even a cocktail. ” The presence of Americans and journalists at the Rex before the liberation [le 30 avril 1975]it’s history, so it’s good for marketing and business,” he says, his eyes smiling behind his iron-rimmed glasses, in a café downtown.

You have 88.77% of this article left to read. The following is for subscribers only.