In Hiroshima, the return of the nuclear threat in the conflicts worries 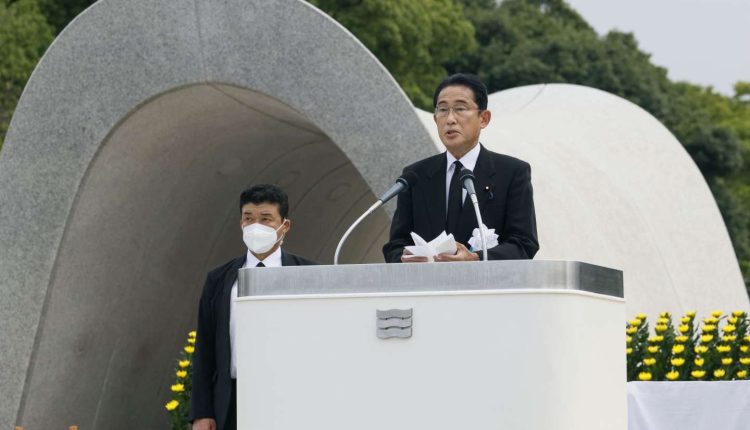 The ceremony of 77e anniversary of the atomic bombing of Hiroshima on August 6, 1945, took place this year against a backdrop of fear of a return to nuclear weapons and the desire of Japanese Prime Minister Fumio Kishida to act for the disappearance of these weapons . Organized as usual in front of the cenotaph erected in memory of the 140,000 victims of the bombing, the ceremony, Saturday August 6, brought together 3,000 people, including hibakusha (survivors) and representatives from 98 countries.

Russia and Belarus were not invited due to the conflict in Ukraine. The Russian ambassador, Mikhail Galouzine, nevertheless made the trip on August 4 and laid a wreath on the monument. If he greeted “Russia’s positive attitude towards the reduction of nuclear weapons”, he has “regretted” for not being invited to the ceremony.

His country has been the target of criticism from the mayor of Hiroshima, Kazumi Matsui. In his traditional declaration for peace, the latter denounced the attitude of ” some [qui] come to threaten to use nuclear weapons., in reference to statements by Russian President Vladimir Putin, shortly after the attack on Ukraine on February 24. Also present, the UN Secretary General, Antonio Guterres, expressed concern about the “crises with a strong nuclear connotation” who “spreading rapidly, from the Middle East to the Korean Peninsula to Russia’s invasion of Ukraine”. For Mr. Guterres, humanity “plays with a loaded pistol”.

As for Mr. Kishida, he deplored that the dynamic of reduction of arsenals has been checked. The question is close to his heart for personal reasons. His family is originally from Hiroshima, a city where he is also a deputy. And, in his youth, he was made aware of the bombardment by his grandmother. The fight for the disappearance of nuclear weapons therefore appears to be inseparable from its action. Minister of Foreign Affairs from 2012 to 2017, he struggled for the visit to Hiroshima, in May 2016, of Barack Obama, the first American president in office to pay tribute to the victims of the atomic bomb.

Since his arrival at the head of the government in October 2021, Fumio Kishida has continued his mission. Despite the skepticism of his entourage, fearing that he would position himself on a question with uncertain results, the Prime Minister went on 1er August in New York at the opening of the Non-Proliferation Treaty (NPT) Review Conference. For him, this agreement signed in 1968 has the double advantage of having already contributed to the reduction of arsenals and of bringing together both the countries which have nuclear weapons and those which do not.

You have 47.41% of this article left to read. The following is for subscribers only.