In China, riots at the world’s main iPhone factory reveal the limits of zero Covid 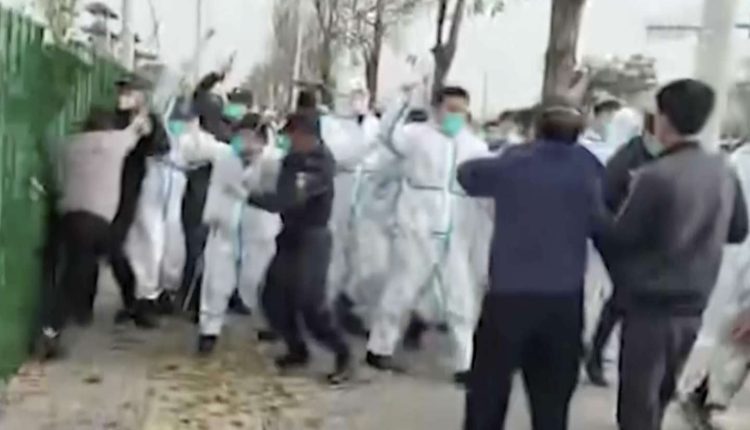 Lit by the dim light of the lampposts, a compact crowd of workers brandishing iron bars pushes back a small troop of policemen, wrapped in white coveralls. On the many videos of these scenes shared on social networks, blows rain down and cries ring out: “the police are hitting people”, “pay our salaries”, “Down with Foxconn”or “defend your rights”. Since Tuesday November 22 and for at least forty-eight hours, thousands of Foxconn workers, who notably assemble Apple iPhones, have protested to demand the payment of bonuses promised for new recruits, while production is disrupted by Covid zero policy restrictions. Other videos, quickly censored, show workers copiously beaten by men in white, taken away by the police or injured.

After two days of clashes, Foxconn decided to buy social peace by offering, Thursday, November 24, 10,000 yuan (1,340 euros), or about two months’ salary, to those who choose to return home. The company also apologized: “We apologize for an input error in the computer system and guarantee that the actual salary corresponds to what was promised on the recruitment advertisements”, the company said in a statement. The error is expected to cost Foxconn and Apple, which depends on the Zhengzhou factory for 80% of its latest iPhone 14s. In early November, the Apple brand had already acknowledged production delays due to the outbreak of Covid- 19 within the giant Zhengzhou campus, nicknamed “iPhone City”.

At the end of October, in fact, tens of thousands of Foxconn employees had fled the site where the cases of Covid-19 were multiplying, denouncing the chaotic management of the situation: Spartan conditions, lack of food and lack of responsiveness to prevent the spread. of the epidemic. A real city within a city, with around 200,000 employees, the Foxconn factory had been operating in a closed circuit since the first cases recorded in mid-October. Images broadcast on the networks showed workers climbing the campus barriers before taking the road on foot for tens of kilometers to return home. Since then, Foxconn has launched a major recruitment campaign, in the middle of the iPhone production season, as Christmas approaches. The company had increased salaries and promised attractive bonuses of 3,000 yuan (402 euros) per employee.

You have 57.11% of this article left to read. The following is for subscribers only.