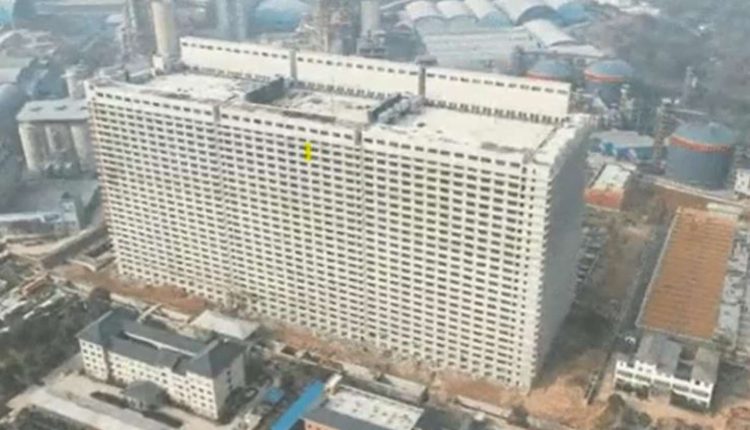 In China, pigs are now housed in skyscrapers. In the city of Ezhou, in the province of Hubei in the center of the country, the company Zhong Xin Kai Wei Elevage Moderne thus welcomed the first 3,700 breeding pigs in its twenty-six-storey concrete tower in early October. “It is the tallest and largest pig house in the world, where the breeze is cool in summer and the air is warm in winter”boasted Lin Jin, the vice president of the company, on Wednesday, October 26, in a streaming video published on the Chinese social network Weibo.

Equipped with a system to monitor the level of ventilation, temperature and humidity in real time, as well as some 30,000 power points and six giant elevators capable of transporting 240 pigs at a time, the building n nothing ordinary. Everything, except the mood of the pigs, is regulated remotely from a management room.

The company is also trying to set up a “circular production”including a high-temperature anaerobic fermentation device (not dependent on oxygen) which, from manure, would produce up to 120,000 cubic meters of biogas per day.

Once desulfurized, this biogas would be used in the production of steam, which would generate electricity. This energy, which would be produced locally, would make it possible to “keep the pigs warm, [aux animaux de] drink hot water and take hot baths, to preserve their health (…) and also to achieve the goal of reducing carbon emissions”boasts the company in an article published on WeChat.

China consumes the most pork in the world

On the 800,000 square meters of formerly industrial land, another building, identical to this one, is about to be completed. In total, the company has invested 4 billion yuan (553 million euros), with the objective of slaughtering 1.2 million pigs on the site each year.

Zhong Xin Kai Wei is not the only company to have entered this business. Since 2020, for a dozen Chinese groups specializing in factory farming, vertical mega-pigsties seem to have become the norm. New records are constantly being broken, whether for the height of the building or the scale of the felling.

With more than 58 million tonnes consumed in 2021, 92% of which comes from domestic production, China is by far the country that consumes the most pork in the world. However, due to multiple epidemics, including African swine fever, the sector experienced significant losses between 2019 and 2021.

You have 35.97% of this article left to read. The following is for subscribers only.