Facing China, the United States re-engages in the South Pacific 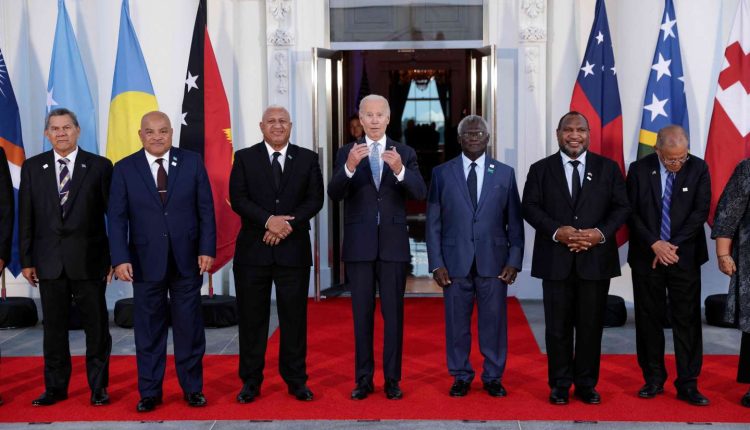 Response of the shepherd to the shepherdess. From May 26 to June 4, Chinese Foreign Minister Wang Yi undertook an exceptional tour of eight South Pacific island states in the hope of concluding a multilateral agreement on security and economy. On Wednesday September 28 and Thursday September 29, US President Joe Biden invited to Washington the leaders and representatives of fourteen Pacific countries and communities – including the Solomon Islands, Marshall Islands, Fiji, Tonga, New Caledonia and even French Polynesia – for an unprecedented summit.

Read also: Article reserved for our subscribers The South Pacific refuses to tie its fate to Beijing

At the end of these two days of meetings, the participants signed a declaration on the United States-Pacific partnership which stipulates, in its introduction: “Today, in the face of a deepening climate crisis and an increasingly complex geopolitical environment, we recommit to working together in true partnership to address the growing challenges of our time”.

Read also: Article reserved for our subscribers The US Diplomatic Offensive in the South Pacific

In the spring, during his regional tour, the Chinese foreign minister had failed to convince the main countries of the South Pacific to adopt “a common vision of development” accompanied by a five-year action plan. On Thursday, Washington managed to obtain their unanimous support – with the exception of the Kiribati islands, which had not made the trip – for this declaration in eleven points dealing with subjects as diverse as regional security, climate change, fisheries illicit or the economic recovery following the Covid-19 pandemic.

“It shows that we have a common vision for the future and a desire to build this future together,” welcomed, Wednesday, the American Secretary of State Antony Blinken, before stressing that it was also a question of guaranteeing a indo-pacific region “free and open and where all countries – big or small – have the right to choose their own path”.

The epicenter of the Sino-American competition

Washington, which is thus reaffirming its desire to become more involved in the region and is giving itself a roadmap to achieve this, had to negotiate until the last minute. Just days before the opening of the summit, the Solomon Islands had sent a diplomatic note to other island states to tell them that they would not sign anything immediately, for lack of consensus. This notion is fundamental for these small nations that use this mode of decision-making within the Pacific Islands Forum, the main body for regional cooperation. But as the Indo-Pacific has become the epicenter of Sino-American competition and the two powers are trying to strengthen their ties with the various countries in the area, consensus has become more difficult to achieve.

You have 44.86% of this article left to read. The following is for subscribers only.