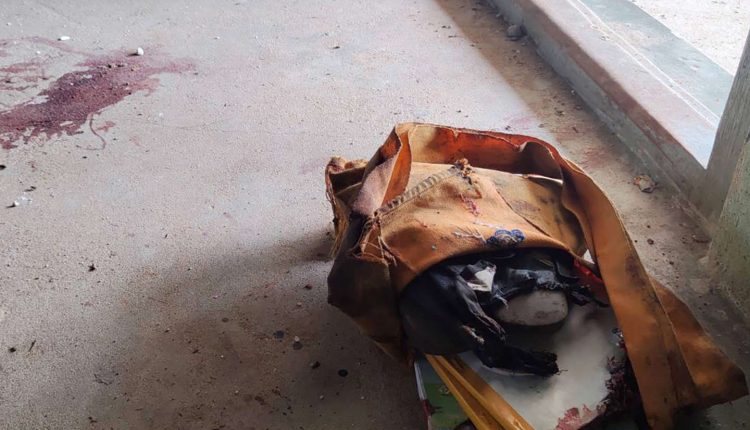 Forty-five minutes under rocket fire: this is what some 200 pupils and teachers of a primary school in the Burmese village of Let Yet kone suffered, in the Sagaing region, 75 kilometers north of the town of Monywa, in the center of the country, Friday, September 16 in the afternoon. At least six children are dead, while two teenagers were killed elsewhere in the village, according to the National Unity Government (NUG), the underground administration that has led the resistance against the military junta in power since the coup. from 1er February 2021.

The NUG published the names of the victims on September 19. At least five other civilians lost their lives in the attack, in which two Russian Burmese army MI-35 helicopters bombed the school located in the grounds of a Buddhist monastery, and dropped commandos who then combed the village and took away about twenty pupils and teachers. Unicef ​​deplored, on September 20, the death of eleven children, without giving details or specifying that the Burmese army was at the origin of the carnage.

Read also: Article reserved for our subscribers Burma: the army intensifies its raids in the center of the country

The commune of Tabayin, where the village of Let Yet Kone is located, is under the control of the Burmese resistance and its People’s Defense Forces (PDF), mostly members of the local population, who took up arms and removes a whole part of the Sagaing region from the administration of the junta, which is increasingly confined to the big cities.

Myawaddy TV, an army propaganda outlet, described the raid as a “control operation” following reports that members of the Kachin Independence Army (KIA) – the ethnic Kachin guerrillas in the northeast of the country – and PDFs “were preparing to send weapons there”. The population of the village is also accused of having formed a “hiding place for NLD supporters” – the party of Aung San Suu Kyi, the former Burmese leader, arrested during the coup. “Civilians were killed as the KIA and PDF used them as human shields,” add the string.

Read also: Article reserved for our subscribers In the central plains of Burma, the Burmese army multiplies the abuses

A few dozen kilometers to the north, another town, Taze, suffered a series of raids by the Burmese army between September 15 and 17. They would have killed ten people – four resistance fighters, whose bodies were burned, and six civilians.

Frequent and unpredictable, these military operations exact a heavy toll on civilians, but have so far failed to restore army control over this strategic area. The Sagaing region makes it possible to connect the territories controlled by the ethnic armies of the northeast (in particular those of the Kachin and Shan States), and of the west – that is to say those of the Chin States and the ‘Arakhan. The Sagaing region is also the symbol of the “Bamar” insurgency, that is to say the main ethnic group of Burma (68% of the population): the Burmese army, before the coup d’etat of 2021 , was essentially waging war against ethnic separatist fighters settled in the peripheral crown of the country.

You have 38.08% of this article left to read. The following is for subscribers only.