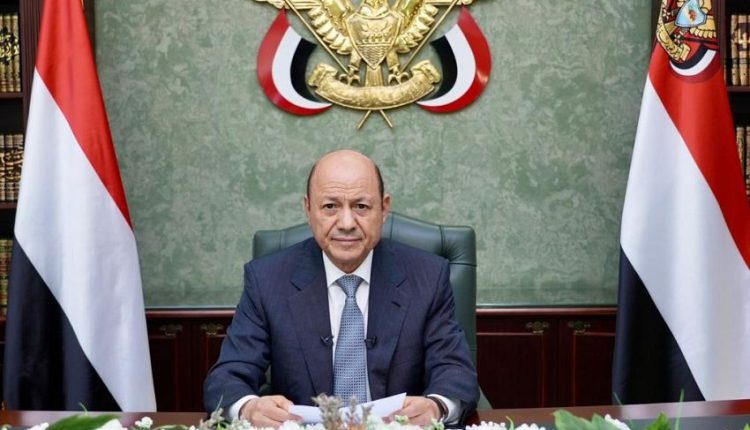 The Chairman of the Yemeni Presidential Leadership Council Rashad Muhammad Al-Alimi saluted the broad alignment of the national forces on the path of restoring the state and achieving peace and stability in Yemen, expressing much thanks and gratitude to the loyal brothers in the countries of the coalition to support legitimacy, led by the Kingdom of Saudi Arabia and the United Arab Emirates, for All that they gave and still are to their brothers in Yemen.

In his speech to the Yemeni people at home and abroad, on the eve of the 32nd National Day of the Republic of Yemen, Al-Alimi pointed to the implications of the exceptional national consensus within the framework of the Presidential Leadership Council. He said, “The alignment of the goal and decision partners from the south and north of the homeland in the temporary capital, Aden, reflects the determination of all forces to restore the state and move to a more participatory space in which Yemenis determine their future on the basis of coexistence.” Al-Alimi and the members of the Leadership Council valued the precious sacrifices of the members of the armed and security forces. On behalf of the members of the Leadership Council and the Yemeni people, he expressed his sincere thanks and gratitude to the loyal brothers in the countries of the Coalition to Support Legitimacy, led by the Kingdom of Saudi Arabia and the United Arab Emirates, for all What they offered and are still doing for their brothers in Yemen, praising the role of the rest of the brothers in the Cooperation Council for the Arab States of the Gulf. He also expressed thanks and appreciation to all the Arab brothers and donor friends, especially the Arab Republic of Egypt under the leadership of President Abdel Fattah Al-Sisi, who opened the doors of Egypt to hundreds of thousands of Yemenis, whether for residence, temporary stability due to war conditions, treatment, or education.

In another context, the Chairman of the Yemeni Leadership Council stressed the priority of the economic issue in the plans and directions of the council and the government of political competencies, including working to activate exports, develop revenues, and regularly pay the salaries of public service employees, the armed forces, security and pensions.. Reiterating the commitment of the leadership and the government, By improving services in all governorates, at the forefront is the temporary capital, Aden, which will receive special attention, befitting its position, history, city, beauty, goodness and purity of its residents. Al-Alimi stressed that the council will work primarily to combat corruption through the development of the control and accountability body, and the selection of a new supreme national anti-corruption body to succeed the existing body. On the level of international and international efforts for peace, Al-Alimi praised the good offices of the UN and US envoys, and the international community to end the suffering of the Yemeni people, stressing the need to implement all provisions of the armistice, in the forefront of which was the opening of the Taiz crossings and other cities.. He called on the international community To double the pressure to push the Houthis to complete the prisoner exchange procedures. He also affirmed the commitment of the Presidential Leadership Council and the government to continue to support the international efforts to extend the humanitarian truce, while reiterating adherence to the initiative of the brothers in the Kingdom of Saudi Arabia, and considering it a just basis for a comprehensive peace process.