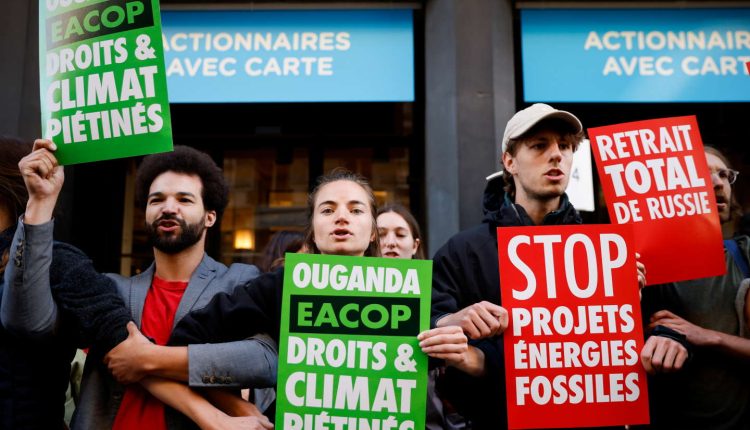 Three years almost to the day after the first confrontation before the Tribunal de Grande Instance of Nanterre, Friends of the Earth, Survie and four Ugandan NGOs found themselves facing TotalEnergies at the Paris Court of Justice, Wednesday, December 7, for a hearing that they hoped to finally see devoted to the bottom of the file : the violation of the law on the duty of vigilance within the framework of the oil exploitation megaproject developed for 10 billion dollars by the French major in Uganda and Tanzania. In many ways, complainants may feel frustrated today.

Read also: Article reserved for our subscribers TotalEnergies sued from all sides for its role in the climate crisis

After challenging the jurisdiction of the commercial court in 2019 – and having finally been disavowed by the Court of Cassation in December 2021 – TotalEnergies chose to remain on the procedural ground by defending the inadmissibility of the complaint. “There will be very little question of substantive elements. I could have spent five hours dismantling the shortcomings, the errors, the disguises [des ONG demanderesses]. Total is not afraid of debate”warned M.e Antonin Lévy at the beginning of his argument, before unfolding the reasons for which the judge in chambers should, according to him, decide the case by an end of inadmissibility.

This choice summarizes all the stakes of this first trial. Fabrice Vert, summary judge in charge of the case, did not fail to recall this in the preamble to the hearing held in a full room: “For the first time, a case based on the Duty of Vigilance Act 2017 is coming before a court. » However, this law of March 23, adopted after the drama of Rana Plaza in Bangladesh, in which more than a thousand workers had died working for subcontractors of the major Western ready-to-wear brands, fits in one page and three articles. It imposes obligations to prevent risks in terms of personal safety, human rights and the environment. But these injunctions are not “not very determined” and “it will be up to the case law to provide the details” that the legislator did not formulate, added the magistrate.

Read also: Article reserved for our subscribers Representatives of five religions demonstrate in Paris against the TotalEnergies oil megaproject in Africa

Should the “interest in acting” of the complainant NGOs be recognized? Should they have filed a new summons since 55% of the requests made to TotalEnergies against the 2018 vigilance plan have, according to Ms.e Levy, changed? To what extent can the multinational be held responsible for the actions of its subsidiaries, when“it is not a party to the agreement that was signed with the Ugandan state” and that there exists in company law “autonomy of legal persons”, further argued the lawyer for the company. These are some of the points that the judge will have to decide.

For Friends of the Earth lawyer Louis Cofflard, the admissibility of NGO requests is beyond doubt and the urgency invoked in 2019 to seize the urgent applications judge remains relevant. Emergency to prevent, like yesterday, “human rights abuses” and today “imminent damage to the environment”, when the work is about to enter a decisive phase. The Tilenga-Eacop project, he recalled, is “the drilling of 400 oil wells, including 130 in the protected area of ​​Murchison Falls, the construction over 1,440 km between Uganda and Tanzania of the longest heated pipeline in the world, a climate-damaging project whose experts predict that it will lead to the emission of 34 million tonnes of CO₂ equivalent per year. »

Read also: Article reserved for our subscribers Two mega oil projects of TotalEnergies in Uganda denounced by the European Parliament

“The survival of humanity is at stake through this type of project”insisted M.e Cofflard by returning to what had initially founded the action, namely the partial or total expropriation of 118,000 people in the two countries, under conditions of compensation that do not comply with the commitments made by TotalEnergies in its vigilance plan through reference to World Bank standards. Some 28,000 people are still waiting for financial compensation. He was also reminded of the attacks on freedom of expression of which those who protest in these authoritarian countries of East Africa remain victims. The Ugandan witnesses present in 2019 did not make the trip this time, for security reasons.

The NGO lawyers asked the judge to order the multinational to adopt a vigilance plan in accordance with the law and to order its implementation. Even if this is not provided for by the law of 2017, they ask that as a precautionary measure the suspension of the work also be ordered, referring to the resolution adopted in September by the European Parliament, which strongly condemned this project. Present at the hearing, MEP Pierre Larrouturou (Progressive Alliance of Socialists and Democrats), behind this resolution, regretted that “TotalEnergies’ lawyers are fleeing the debate and consider that what is happening on the ground does not concern them, while tens of thousands of people are suffering”. The decision has been reserved for February 28, 2023.