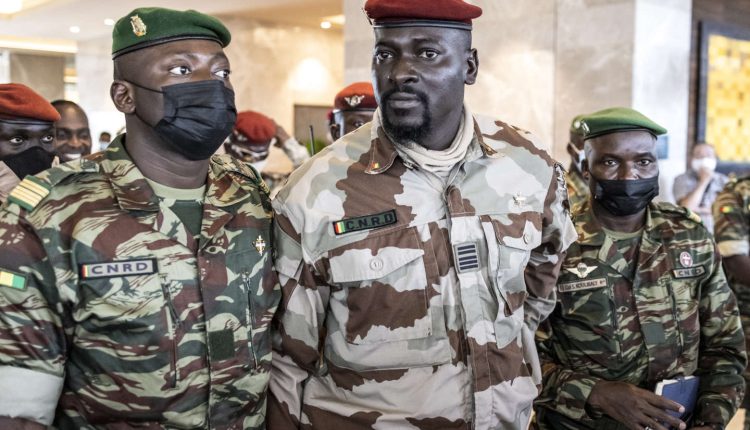 The head of the Guinean junta came to Mali on Wednesday, September 21, on the eve of the independence day of this neighbor also led by soldiers, but also of a diplomatic meeting fraught with stakes for the two countries. , noted AFP correspondents.

This trip by Colonel Mamady Doumbouya, the first outside the borders since he and his men took power by force in September 2021, only gave rise to public communication after his arrival.

Read also: In Guinea, clashes in Conakry one year after the coup

Colonel Doumbouya “was welcomed, with all honors, on his descent from the presidential plane of the Republic of Mali, by President [Assimi] Goita »leader of the Malian junta, indicated the services of the latter in a press release which speaks of “friendship and work visit”.

Mali celebrates Thursday the 62e anniversary of its independence. The same day must be held on the sidelines of the UN General Assembly in New York an extraordinary summit of the organization of West African States (ECOWAS) which should be mainly devoted to Guinea and Mali. Mali, twice, and Guinea are part with Burkina Faso of the ECOWAS countries where the military has seized power over the past two years.

The summit is expected to consider how to respond to the Guinean military’s plan to hold the country’s helm for three years before handing over to elected civilians. The current president of ECOWAS, the Bissau-Guinean Umaro Sissoco Embalo, warned on Wednesday that Guinea was going to the front “heavy penalties” if the junta persisted in this design.

Read also: Guinea: several organizations urgently call for an inclusive dialogue after the junta’s use of force

ECOWAS imposed a severe commercial and financial embargo on Mali in January to sanction the military’s plan to stay in power for up to five more years. The junta led by Colonel Assimi Goïta has since pledged under pressure to hold elections in February 2024 and ECOWAS has lifted the embargo. But Mali and Guinea remain suspended from ECOWAS bodies.

With regard to Mali, it is above all the fate of 46 Ivorian soldiers arrested on July 10 on their arrival in Bamako and detained since then who should occupy ECOWAS. The case has further deteriorated the already strained relations between Bamako and Abidjan. The Malian junta describes these soldiers as “mercenaries” and accuses them of having wanted to attack the security of the State. Côte d’Ivoire assures that they came on a mission for the UN and denounces “hostage-taking”.

The Guinean authorities had been among the few to show solidarity with Mali in the face of sanctions and had kept the borders open.