The exaggerations and manipulations of Giorgia Meloni on the CFA franc 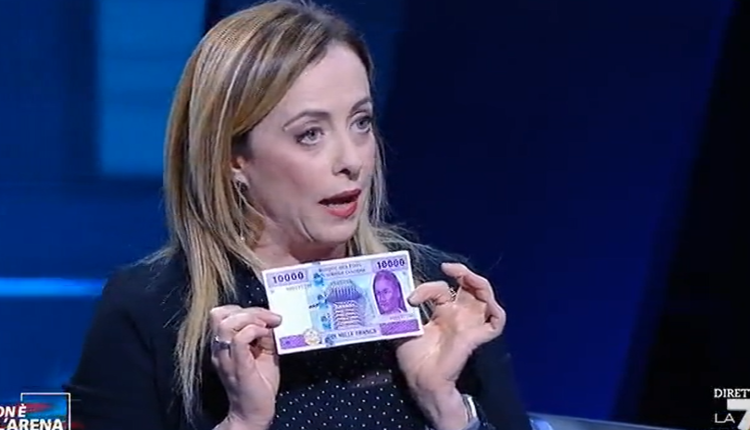 Thanks to the Franco-Italian tensions caused by Rome’s recent refusal to welcome migrants fromOcean-Vikingold remarks by the current head of the Italian government accusing France of colonialism resurfacemostly shared by far-right networks.

Guest on January 20, 2019 of the show “No to the arena”one of the main talk shows in the country broadcast on the Italian channel LA7, Mme Meloni, who was then only a deputy and president of the Fratelli d’Italia party, heavily accused France of using the CFA franc to unduly exploit the resources of the fourteen West and Central African countries which are using it.

Giorgia Meloni’s attack was not isolated, since several executives of the 5-Star Movement (M5S) party had made the same remarks on the same day. By Alessandro Di Battista, who tore up a counterfeit 10,000 CFA franc note on the set of “Che Tempo Che Fa”to Luigi Di Maio, then president of the M5S and vice-president of the council, which accuses France of impoverishing the countries using this currencythe Italian extreme right had that day chosen to make the CFA franc a central argument to attack Paris, the day after the disappearance of 117 migrants in the Mediterranean. Even if it means caricaturing the legitimate economic criticisms of this currency or literally inventing facts.

The CFA franc, a colonial currency?

“The CFA franc is the colonial currency that France prints for fourteen African nations. »

Created and used officially since 1945, the CFA franc was in fact initially a so-called “colonial” currency issued by the Banque de France in a certain number of countries on the African continent (CFA also means at the time “French colonies of Africa”). Since then, the CFA franc is no longer issued by France but by the two central banks which govern the monetary policy of these two zones (UEMOA and CEMAC). These are the only ones to decide on the amounts to be issued and therefore the quantity of banknotes to be put into circulation. From a legal point of view, the member countries of these two monetary zones also have the possibility of abandoning the CFA franc to have their own currency.

The two central banks are not entirely free in their monetary policy, because the value of the FCFA is pegged to that of the euro

Which makes a number of critics say that the FCFA is the “last colonial currency in the world”, is that these two central banks are however not entirely free in their monetary policy, because the value of the FCFA is pegged to that of the euro – which forces these two establishments to follow the policy of the European Central Bank . The latter requires limiting the value of inflation to less than 2% for the WAEMU and less than 3% for the CEMAC, and therefore to curb the printing press.

The fact that France has long been represented within the governing bodies of the central banks of these two “franc zones” is also, according to critics of the FCFA, a lever available to Paris to influence the monetary policy of these countries. Today, the French representation is much less influential in these bodies, since the “reform” of the FCFA of December 2019, enshrined in French law in the spring of 2020, recorded the withdrawal of French representatives from the Central Bank of the States of West Africa, while those present, two in number, at the Bank of Central African States no longer have the right of veto. However, this withdrawal was not engaged when Ms.me Meloni, in 2019.

A final aspect addressed by Giorgia Meloni is that this currency is printed in France, which is true. Two production sites (located in Pessac, in Gironde, and in Chamalières, in Puy-de-Dôme) are responsible for manufacturing the monetary mass then later transferred to Africa. It is actually a rather classic contractual relationship, which many other countries also practice when it costs more to produce your own currency yourself. In 2022, more than forty of the fifty-four African countries print their currencies abroad, as do some European countries, such as Denmark.

The lie about the “lordship” French

“France applies a seigneuriage which allows it to exploit the resources of these nations. »

why is it wrong

The argument is crucial in the rhetoric of the Italian far right, since it allows Rome to imply that Paris has a direct responsibility in the large flows of migrants trying to reach Europe by crossing the Mediterranean. It is, however, false.

Giorgia Meloni is inspired by a reality: the two central banks of the zones where the CFA franc circulates had, until 2020, to deposit 50% of their foreign exchange reserves in an operation account of the Banque de France, in Paris. , in accordance with the two monetary cooperation treaties signed with France. Mme Meloni, however, distorts this fact to the extreme by implying that it amounts to 50% of the wealth produced in these fourteen African countries returning to the latter, as she affirms by taking the example of Burkina Faso:

“France prints its colonial currency for Burkina Faso, which has gold. In exchange, they demand that 50% of what Burkina Faso exports end up in French treasury coffers. »

Giorgia Meloni reuses here an old argument of certain detractors of Paris, who in the past have spoken of France’s “colonial tax” in Africa. This, however, has little to do with a tax and does not amount to extorting half of their wealth from African countries.

The monetary cooperation agreements signed in 1972 and 1973 with these two franc zones formalize certain operating rules in force since the end of the 1950s, namely:

This deposit was supposed to guarantee monetary stability for user countries, with the aim of inspiring the confidence of foreign investors. Contrary to what Mr.me Meloni, France made no use of these funds, which remain the property of these fourteen African countries. This “operation account” opened in Paris until recently was also remunerated by the Banque de France at a rate higher than that of the market (0.7%), and therefore annually brought in several tens of millions to the two banks. centers concerned.

“So the solution is not to take Africans and bring them to Europe, the solution is to liberate Africa from certain Europeans who exploit them and allow these people to live with what they have! »

why is it wrong

Giorgia Meloni uses here pre-existing criticisms of the CFA franc to conclude that the impoverishment for which it is responsible would push many Africans to cross the Mediterranean to migrate to Europe.

However, the vast majority of people trying to reach Europe from Africa are not from countries that use the FCFA. “We cannot say that African countries in the franc zone are overrepresented in migratory flows to Europe, even if we consider things over the long term”noted in 2019 Jacques Barou, research director at the CNRS and migration specialist, in The world Africa. The main flows from Africa “mainly leave from Sudan, Eritrea and Nigeria, three countries that have never been in the franc zone”he pointed out then.

According to data from the International Organization for Migration (IOM) published in July 2019a few months after the assertions of Mme Meloni, most of the African migrants who arrived on European shores in 2017 and 2018 indeed came from the Democratic Republic of Congo, Algeria or Somalia, which do not use the FCFA. Many migrants also came from Cameroon, where the CFA Franc circulates, but regular attacks on civilian populations by the terrorist group Boko Haram in the north of the country, floods and tensions between communities caused by reduced access to water and pastures are the main reasons for emigration of Cameroonians.

The data compiled since 2014 by IOM on the origin of migrants who died trying to reach the Old Continent show a similar, although slightly different trend. The Maghreb countries (Morocco, Algeria, Tunisia) form the leading trio of African countries, followed by Senegal, Eritrea, Mali and Sudan. In total, of the 3,424 dead who could be identified as nationals of African countries, 80% came from countries that did not use the FCFA, and 20% from member countries of the franc zones (Senegal, Mali, Côte d’Ivoire, Cameroon ). It should be noted that the origin of the majority (83%) of 29,000 migrants have died trying to reach Europe since 2014 unfortunately could not be identified.

Poverty obviously plays a role in the emigration of part of the population of these countries, but political or social violence are also determining factors in the decision to leave a country, particularly in the Sahel, where “Violence has increased in recent years as a result of a combination of factors”notes the IOM in its latest report, published in 2022.

Economically, the debate on the impoverishment of African countries by the FCFA is almost as old as the independence of these countries from their colonial tutelage. This currency is indeed regularly criticized by economists because of its backing to a strong currency, the euro, which strongly penalizes exports, and therefore the poorest populations of these countries.

Read also: Article reserved for our subscribers The countries of the CFA franc zone suffer from the fall of the euro and the surge in prices

If it is now relatively documented that the FCFA is partly unsuited to the economy of these countries, it seems exaggerated to conclude that it impoverishes them, especially to the point of causing massive emigration. Several studies concluded that the economic growth of the countries belonging to the franc zones was over time quite comparable to those using other currencies.

Read also The real-false disappearance of the CFA franc