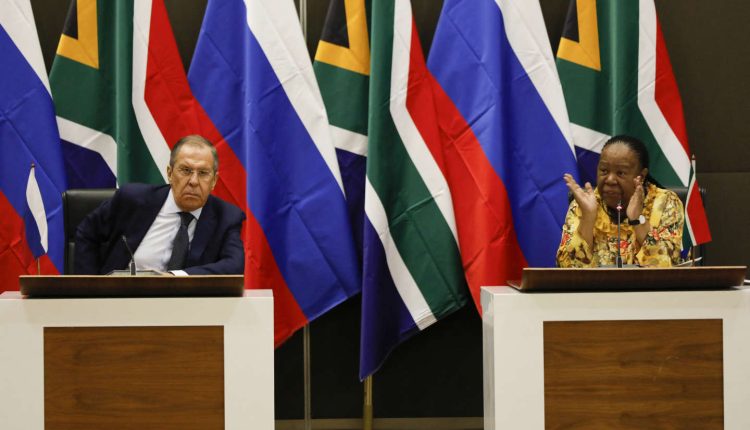 Since the start of the war in Ukraine, never have South Africa and Russia appeared so close. On a visit to Pretoria on Monday January 23, Russian Foreign Minister Sergei Lavrov received a warm welcome from his South African counterpart, Naledi Pandor, who described Russia as a country ” friend “. The meeting came as South Africa recently confirmed the holding of joint military exercises with the Russian and Chinese navies.

Read also: The head of Russian diplomacy Sergei Lavrov on tour to reassure and care for his African partners

The maneuvers, described by the South African army as a means of “strengthen the already flourishing relations between South Africa, Russia and China”, are due to take place from February 17-27 near the port city of Durban. This second cycle of joint exercises involving the three countries – after the one organized in 2019 – will therefore take place during the week marking the first anniversary of the invasion of Ukraine.

A heavyweight of diplomacy in Africa, Pretoria has been at the heart of the struggle for influence that has pitted the United States against Russia on the continent since the start of the war. Officially neutral, Africa’s leading industrial power abstained from voting on resolutions condemning Russian aggression at the United Nations. “South Africa believes that the only way to peace is through diplomacy and dialogue”repeated Naledi Pandor on the occasion of his meeting with Sergei Lavrov.

However, the holding of these military exercises “is not quite neutral”believes Steven Gruzd, specialist in relations between Russia and South Africa at the South African Institute of International Affairs, a think tank: “It seems that our government tends more to the Russian side than to the West on the question of the war in Ukraine. »

In August 2022, South African Defense Minister Thandi Modise drew criticism by traveling to Moscow to attend a conference on international security issues. And in December, a Russian commercial vessel under US sanctions docked at a South African naval base under mysterious circumstances. After a long silence, the Ministry of Defense finally acknowledged that the ship had unloaded “an old order for ammunition overdue for the special forces”.

Read also: In Ethiopia, Sergei Lavrov urges Africans not to support a world ruled by Westerners

“We appreciate the independent, balanced and thoughtful approach of our South African friends”, greeted Sergei Lavrov on Monday. Conversely, Pretoria’s position does not please Pretoria’s main Western partners, first and foremost the United States, Germany, France and the United Kingdom. “We have relationships with whoever we want, on the basis we want. […] Nobody asked us about the exercises with the United States recently. And no one asked us about the exercise carried out with France last November”Naledi Pandor insisted on Monday, denouncing the ” Two weights, two measures “ of which the South African authorities believe they are victims.

“All countries practice military exercises with their friends all over the world. This is part of the natural course of relations between countries and we should not deny any nation the right to take part in this.”, continued the head of diplomacy. South Africa and Russia are therefore ” friends “ and the war in Ukraine hasn’t changed that. Or rather, the African National Congress (ANC, the ruling party) and Russia are friends. A closeness that goes back “in the time of the struggle against apartheid”recalled Naledi Pandor.

At the time, the USSR appeared in the eyes of the ANC and its communist allies as a model of an ideal society, but not only. From 1955, Moscow broke its diplomatic ties with the racist regime and, from 1961, the Soviet Union offered decisive support to members of the ANC forced into exile or into hiding after the movement was banned. The USSR arms, equips and trains the armed wing of the ANC, Umkhonto we Sizwe. It also offers refuge to the leaders of the movement and decisive political support on the international scene. Almost thirty years after the fall of apartheid, this legacy still weighs heavily in the collective memory of the ANC.

“The ties formed with the Soviet Union have been resurrected with a certain romanticism. Furthermore, South Africa believes in a multipolar international order, it does not like the idea of ​​a world dominated by a superpower and it is suspicious of the United States and its intentions since the Cold War., analyzes Steven Gruzd. Surfing on this line, Sergei Lavrov denounced the “neocolonialism” of the United States and recalled Russia’s stated desire to make more room for developing countries within the United Nations Security Council, while Naledi Pandor called for relying on the BRICS alliance (Brazil, Russia , India, China, South Africa) and the G20 to “democratizing the system of international governance”.

Read also: Article reserved for our subscribers In South Africa, the head of American diplomacy pleads for an “equal to equal” partnership with the continent

Last August, during the visit to Pretoria of the American Secretary of State, Antony Blinken, the minister had hailed the United States as “one of the most valuable partners” of South Africa, while criticizing attempts to put pressure on African countries that would like to maintain relations with Russia. Monday, on the other hand, no false note came to tarnish the meeting between Sergei Lavrov and Naledi Pandor. The United States’ response will not be long in coming: US Treasury Secretary Janet Yellen is expected in Pretoria on Wednesday.