Senegal: the “Aline Sitoé Diatta” ferry, a link between Dakar and Casamance 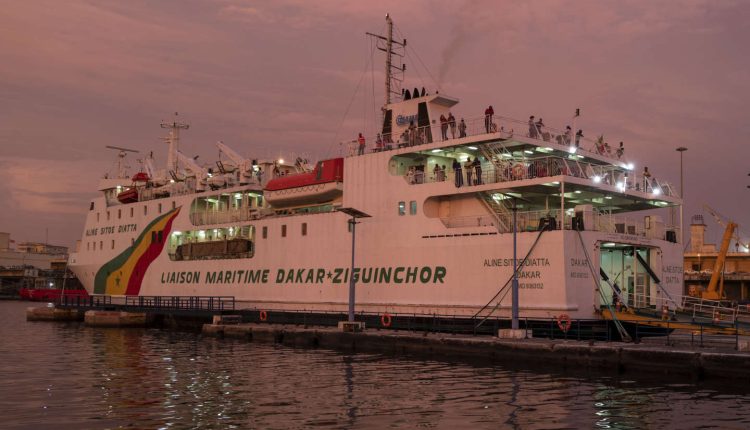 In the distance, the lights of the coasts of the Cape Verde peninsula sparkle on the black horizon. the Aline Sitoé Diatta approach to the mainland. On the bridge, Captain Abdoulaye Sarr, his second in command and part of the crew are on the alert. All kinds of ships cruise offshore: tankers, container ships, fishing boats… Giants and nutshells.

The ferry flying the Senegalese flag crosses the entrance pass to the port of Dakar and heads for its pier, number 1. Orders fly: “Rear 50 meters”, “Thank you stop”, “Clean on the left”, “Send the Moors”. It’s 5:30 in the morning. After 16 hours of smooth sailing from Ziguinchor, the big city of Casamance, in the south of Senegal, the Aline Sitoé Diatta is at dock.

During the crossing, off the Gambian coast, the boat left to starboard, 7 nautical miles (13 km) from its course, the wreck of the Joola, which turned around on September 26, 2002, taking with it nearly 2,000 people. The ship is still lying about fifteen meters deep.

Since 2008, it is the Aline Sitoé Diatta which provides the Dakar-Ziguinchor connection at the rate of two weekly rotations. With one mission: to help open up the southern province of Senegal, partly cut off from the rest of the country by Gambia. And an imperative: to do everything possible so that the tragedy of the Joola never repeats itself.

Built in 2006 and 2007 at the Bern shipyards (Germany), the 76-meter long and 15-meter wide ship is managed by the Senegalese Consortium for Maritime Activities (Cosama), created in 2008 by the will of the State to take in hand since the sinking of the Joola everything concerning safety in terms of passenger transport on the route.

“Cosama is owned by private individuals – the Maritalia group and a Senegalese businessman – and the state. It can be considered as a private company with majority public participation, specifies Abdou Salam Kane, director of operations within Cosama.

No more mess like in the days of Joola

Whereas The Joola was designed to transport 580 people, it accommodated more than three times the day of the disaster. Today, although the Aline Sitoé Diatta is full at each crossing, the computer system dedicated to the transport of people is blocked as soon as the maximum capacity is reached, i.e. 486 passengers. The same is true for freight, allowing the crew to calculate the stability of the ship. Software predicts the weight of the diesel and fresh water tanks, and the seven ballast tanks are filled according to the weight of the freight and the number of passengers.

From then on, no more chaos during boarding as at the time of Joola. At the counter of the Ziguinchor ferry terminal, candidates for the trip must present their tickets, nominative and equipped with a QR code. Boarding can begin calmly. In the ship’s huge garage, vehicles and freight are loaded in good order. the Aline Sitoé Diatta cast off.

The men on watch keep watch on the bridge, binoculars close at hand for some and eyes trained on the radar screens for others. Because when navigating on the Casamance River – 70 kilometers before reaching the ocean – the ferry crosses many fishing outrigger canoes and the currents can be strong.

Part 2 Article reserved for our subscribers In Senegal, the relatives of the victims of “Joola” continue the fight

The ship is permanently located and a radio point is made every two hours with Dakar. Abdoulaye Sarr has been making the crossing since 2008. First lieutenant then second captain, he is now one of the commanders of the Aline Sitoé Diatta, which has a total of 42 crew members. “Today, the river benefits from significant beaconing with 108 buoys in total, compared to barely forty previously”, he explains. A valuable aid to navigation which did not benefit The Joola.

After a stopover at the island of Karabane, now equipped with a pontoon and a quay, near the mouth of the Casamance, the crossing of the river pass has also been improved. “Before 2016, the mouth was very complicated with shallow depths, very tight bypasses due to sandbanks and a very narrow channel. The State therefore ordered a complete dredging”underlines Commander Sarr.

Checked each year by an international classification society, DNV GL, the ferry is also put in dry dock for almost a month every year for an overhaul of the engines, technical and safety equipment. The live works, that is to say all the submerged parts, are inspected, streamlined and repainted.

When Cosama was given the task of managing the line, a calculation was made in order to set a price. But the ticket prices were way too high. “This line ensures territorial continuity, by helping to open up [de la Casamance] by sea. It is therefore the State which unilaterally fixed the fares and pays the difference in the form of financial compensation to the company, in the order of 57% per ticket, to achieve the balance. This line has kind of become social”, explains Mr. Kane. Thus, it costs Senegalese passengers from 5,000 to 26,500 CFA francs (from 7 to 40 euros) to make the crossing, depending on the level of comfort chosen (armchairs or cabins).

Part 3 Article reserved for our subscribers “A generation has disappeared”: in Senegal, Casamance permanently scarred by the drama of “Joola”

The boat owes its name to a Casamance heroine. Resisting French colonization, Aline Sittoé Diatta advocated civil disobedience, gender equality, the refusal of forced labor, taxes and enlistment, by force, in the colonizer’s army. The French arrested her, judged her and deported her in 1943 to a penal colony in Timbuktu (Mali), where she died a victim of ill-treatment in 1944, at the age of 24.

Today, the ferry fills up with travelers on each rotation. Given the success of the line, two sister ships, the dimambona and theAguenewere in turn put into service at the end of 2014. With a capacity of 200 passengers and 450 tons of freight each, they also provide two weekly rotations between Dakar and Ziguinchor.

The least reassured passengers can always count on the presence of two nurses on board. ” We can manage attacks of anxiety, anguish or panic when the sea moves too much, says Pape Diop, nurse on the line since 2015. They are then placed in the infirmary to discuss with them, calm them down, give them a sedative if necessary. »

Episode 4 Senegal: the transformed face of Ziguinchor, twenty years after the sinking of the “Joola”

The atmosphere is rather serene on board the ferry, especially in the restaurant. At the bar, installed at the stern of the ship on the fourth deck, a sound system broadcasts mostly mbalax at a volume that forces customers to shout their drink orders. Others chat, leaning on the railings facing the white wake lit by the moon. Visibly not bothered by the music and a light swell, a few passengers are sleeping on the benches in the open air. Some, when they wake up, to arrive safely.

Video Our investigation of the African “Titanic”
episode 1 Twenty years ago, a shipwreck called “Joola”
Part 2 Article reserved for our subscribers The relatives of the victims of “Joola” continue the fight
Video Divers filmed the wreck of the “Joola”
Part 3 Article reserved for our subscribers Casamance permanently bruised by the drama of “Joola”
Video The only surviving woman confides in the night of the tragedy
Episode 4 Senegal: the transformed face of Ziguinchor, twenty years after the sinking of the “Joola”
Episode 5 Senegal: the “Aline Sitoé Diatta” ferry, a link between Dakar and Casamance