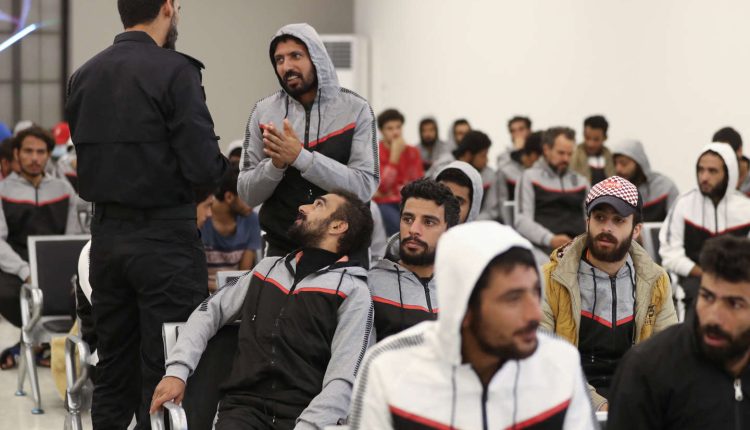 The body responsible for combating illegal immigration in Libya organized road convoys to the eastern and southern borders on Thursday, November 24 to return more than 200 foreigners, thanks to unprecedented coordination between rival regions.

This authority, affiliated to the Ministry of the Interior of the Government of Tripoli, has “organized road convoys today (…) to deport 105 Egyptians, 101 Chadians and 20 Sudanese to the borders”Badreddine El-Sed Ben Hamed, deputy head of the office in charge of expulsions, told AFP.

The number of people who “are subject to inadmissibility” keeps growing and “Penitentiary centers are overcrowded, which creates a lot of difficulties”explained to AFP General Ahmad Abu Kraa, in charge of public relations for the judicial police.

In the presence of representatives of their embassies, the “expelled”all in black and white or black and gray tracksuits depending on nationality, were first herded into rooms where police officers handed them bottles of water, cookies and milk before handing them a pass and put them on buses.

Arriving in Ajdabiya, the Egyptians will be taken back to the Salloum border post, while the Chadians and Sudanese will take the road to Koufra (south) then Al-Aouenate on the border with Sudan.

Until then, the UN agencies were responsible for the repatriation of refugees and migrants, but since an agreement recently signed between the leaderships of western, southern and eastern Libya, the body in charge of these referrals to the Ministry of the Interior now operates in a unified manner.

Read also: Article reserved for our subscribers From eastern Libya, a migratory route is reopening in the Mediterranean

Plunged into chaos since the fall of Muammar Gaddafi’s regime in 2011, Libya has become a hub for tens of thousands of migrants seeking to reach Europe by sea. Apart from a few visa-exempt nationalities, most migrants enter Libya illegally, through the porous borders of the vast desert south.

Intercepted by the Libyan Navy even in international waters before reaching Europe, the migrants are forcibly brought back to the coast and then placed in detention in deplorable conditions, frequently denounced by NGOs and the UN.

Ivory Coast: at the trial of the Grand-Bassam attacks, the beginning of the…