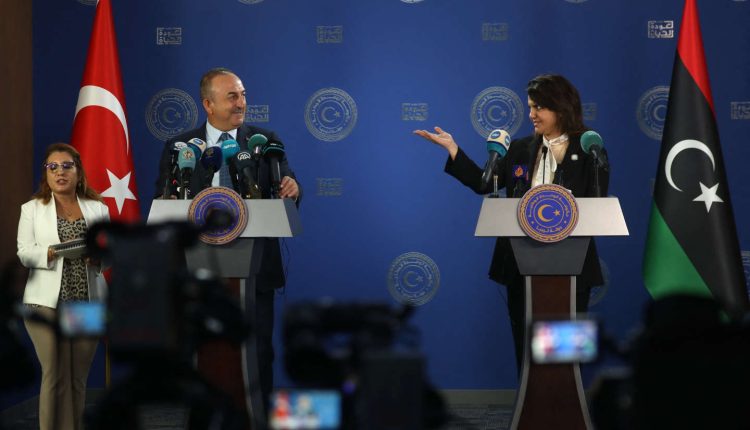 Libya and Turkey signed an agreement on prospecting for hydrocarbons in Libyan waters on Monday (October 3rd), three years after concluding a controversial maritime delimitation agreement which had aroused the ire of the European Union (EU). “We have signed a memorandum of understanding for the prospecting of hydrocarbons in the territorial waters of Libya as well as on Libyan soil by mixed Turkish-Libyan companies”declared the head of Turkish diplomacy Mevlut Cavusoglu, during a press briefing with his Libyan counterpart Najla Al-Mangoush.

The memorandum was signed during a visit to Tripoli by a high-level Turkish delegation including the ministers of energy, Fatih Dönmez, defense, Hulusi Akar, and trade, Mehmet Mus. This memorandum provides for “to develop projects related to the exploration, production and transportation of oil and gas”Tripoli government spokesman Mohamed Hamouda said in a Facebook post.

A controversial maritime delimitation agreement was reached in November 2019 between the former UN-recognized Government of National Accord (GNA), based in Tripoli, and the Turkish government. This agreement allows Ankara to assert rights over large areas in the eastern Mediterranean, much to the chagrin of Greece and the EU.

Mr. Cavusoglu defended this agreement and the memorandum on hydrocarbons. This is’“A matter that concerns two sovereign countries is a win-win for both and other countries have no right to interfere in these matters”, he specified. Mme Mangoush for her part welcomed the agreement ” Very important “ concluded on Monday, claiming that it served “interests of both countries”.

In return for the 2019 maritime delimitation agreement, Turkey had helped the Tripoli government to repel in June 2020 the offensive led by the forces of Marshal Khalifa Haftar, a strongman from the East, to take the capital. Ankara had sent military advisers and drones to Libya, which had inflicted a series of defeats at the gates of Tripoli on the forces of Marshal Haftar, supported by Russia and regional rivals of Ankara, in particular the Arab Emirates States and Egypt.

Since March, two governments have been vying for power in Libya, a country that descended into chaos after the uprising that led to the fall of Muammar Gaddafi’s regime in 2011. Tripoli’s was set up in 2021 as part of a UN-sponsored peace process, while the other is led by former interior minister Fathi Bachagha and backed by Marshal Haftar’s camp.

Eastern-based parliament speaker Aguila Saleh, an ally of Marshal Haftar, called the agreement signed on Monday a“illegal and unacceptable”. The government supported by the eastern camp also rejected it, reserving “the right to resort to justice” to obtain its cancellation.

Reacting to the memorandum signed on Monday, the head of Greek diplomacy Nikos Dendias revealed on Twitter that he and his Egyptian counterpart Sameh Shoukry believe that the government of Tripoli is devoid of “legitimacy” to seal such an agreement. Mr. Dendias also announced that he would travel to Cairo on Sunday for “consultation” on this file.

Cyprus, Egypt and Greece believe that the 2019 Turkish-Libyan maritime delimitation agreement violates their economic rights in this sector where the discovery in recent years of vast gas deposits has whetted the appetite of countries in the region. Egypt and Greece had also signed in August 2020 their own maritime border demarcation agreement in the eastern Mediterranean, as a response to the Turkish-Libyan agreement.