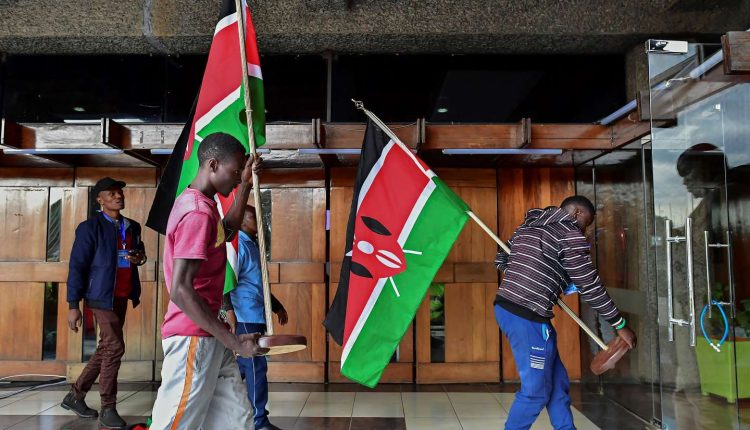 Since the closing of the polls on Tuesday August 9, Kenyans have been glued to their screens. For the first time since the country’s independence, the television channels are carrying out a count, live, hour after hour, suggesting a ballot more undecided than ever. While the Independent Electoral Commission (IEBC) has until Monday to announce the results, the main candidates, veteran Raila Odinga and Vice President William Ruto, are both flirting with the 50% mark. And in this exceptionally tight duel, the Mount Kenya region, the country’s largest reserve of votes, could play a decisive role, like the swing states Americans.

Read also: General Elections in Kenya: Abstention on the Rise and Waiting for Results

Part of the Kikuyu community (18% of the Kenyan population), the former Central Province is not presenting, for the first time, any presidential candidate. An anomaly all the more glaring as it provided three of the four heads of state who have led the country since 1963, including Uhuru Kenyatta, the outgoing president.

According to the partial results, an overwhelming majority of the region’s 5.8 million voters chose William Ruto and his Kenya Kwanza (“Kenya First”) alliance. For Mary Wangui, campaign manager for Raila Odinga in the town of Nyeri, the reason is simple: “People vote Ruto not because they buy into his project or his personality, but because they’ve learned to hate his opponent. »

Spangled with post-electoral crises, the Kenyan history of the last forty years has been marked by several cycles of violence opposing the Kikuyu to the Luo community. Considered the leader of the latter, Raila Odinga, is still seen as the instigator of these clashes, and ultimately as an enemy of the Kikuyu. “All kinds of rumors have made their way about himdetails Ndungu Gichane, the daily correspondent The Standard in Nyeri. People said of Odinga that he was a wizard, an animal, a pagan. »

In the four previous polls in which he participated, the 77-year-old candidate almost never campaigned in Mount Kenya and never won more than 10% of the vote there. This year, it should gather around 20% of votes. An increase that is very much in the name of his running mate, Martha Karua. Originally from Kirinyaga (the former name of Mount Kenya), this figure in the fight against corruption and former minister of justice has convinced some undecided people. Especially those who would like to see a woman become the country’s vice-president for the first time.

Read also: Article reserved for our subscribers In western Kenya, the endless wait for Raila Odinga

But “The Martha Effect” has its limits. Because, to curry favor with the Kikuyu vote, William Ruto spared no effort. The 55-year-old vice president, from the Kalenjin community in the Rift Valley, has visited Central Province almost every week for the past four years. He multiplied donations to religious congregations, spending hundreds of millions of shillings to rally influential pastors to his cause. He also chose a Kikuyu running mate: the sulphurous Rigathi Gachagua, often mocked for his repeated slippages and recently convicted of embezzlement of public money.

In a country where ethnic clientelism remains an important but less central fact, William Ruto has also bet on populism. He presents himself as the candidate of Hustler Nation (“homeland of the hustlers”), “ordinary” Kenyans mired in an economic crisis marked by inflation and exasperated by corruption. The flagship measure of its program consists in creating a fund to help precarious workers.

At a rally on August 2, candidate Ruto, standing on top of a car piercing the crowd in downtown Nyeri, also promised that his presidency would be that of a « Marshall plan for young people […] to give them more opportunities and make them more productive”. A speech that rings true for Bernard, a 26-year-old young man who harvests grapes on coffee farms, when he is not selling sweets, fruits and peanuts in the streets of Nyeri for 300 shillings (2.50 euros) per day. “I work to be able to feed myself, and still, sometimes, I have to skip lunchhe says, swimming in a yellow T-shirt in the colors of William Ruto’s political party, the UDA, whose logo is a wheelbarrow. I vote for Ruto because he understands us, he’s like us, he started from scratch, he was selling peanuts too. »

In his biography, The Rise of a Resourceful, as in his speeches, the vice-president often puts forward his modest origins. Son of a couple of farmers from the village of Sugoi, in the west of the country, he would have bought his first pair of shoes at 15 years old. Before that, he says, he sold peanuts and chickens, barefoot, on the side of the roads in this region known to be the homeland of long-distance runners.

To seduce the inhabitants of Mount Kenya, William Ruto hides his role in the post-election crises of 1992 and 2007, during which he is suspected of having instigated violence and expropriated the Kikuyu minority of the Rift Valley. Charges that will earn him prosecution by the International Criminal Court (ICC).

Paradoxically, the popularity of the vice-president in the Kikuyu bastion is reinforced by the disenchantment that surrounds the president of the Republic. Although he is a native of the country, Uhuru Kenyatta is considered by some inhabitants of Mount Kenya to be ” a traitor “ who would have “betrayed his tribe” by allying himself with Raila Odinga, still and always considered the hereditary enemy of the ” Mountain “.