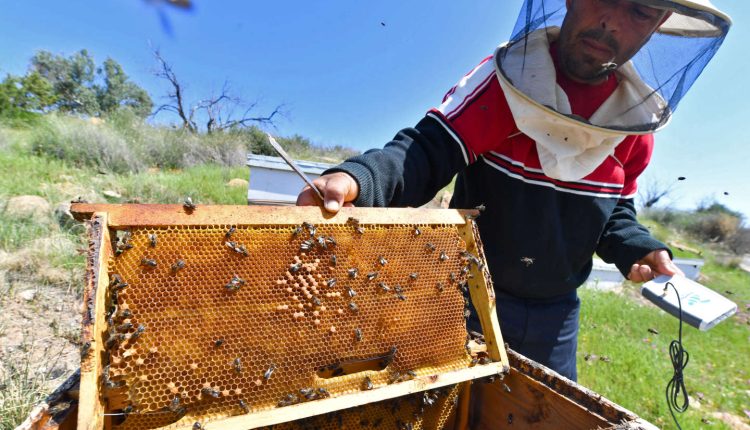 Elias rushes to his “smart hives”. The beekeeper received an alert signal on his phone thanks to an application, 100% Tunisian and a pioneer in North Africa, intended to avoid excess bee mortality and optimize honey production.

On a hill on his family plot in Testour, northwest of Tunis, Elias Chebbi, 39, opens the shutter of a beehive and shows a small white device similar to a decoder that measures variables and warns him of anything incident, via the Smart Bee application. The Tunisian start-up Beekeeper Tech has developed an infrared sensor device that continuously provides data on the environment and the health of bees, to ” an affordable price “.

Read also: In Tunisia, the project for the translation of French books into Arabic

The sensors measure humidity, temperature as well as the buzzing of insects. When there is a problem, an alert is sent. The devices even have a GPS locator to prevent hive theft. “Thanks to this, I am calm and I know from a distance what is going on”rejoices with AFP, Elias, an ex-accountant who started beekeeping in 2013.

It was the same year that a group of young Tunisian engineers came up with the idea of ​​remote control of hives, before launching Beekeeper Tech in 2016. The commercialization phase only started in 2020. This start-up is the only one of its kind in North Africa and has already sold more than a thousand Smart Bee devices, mainly in Tunisia and neighboring countries.

According to its CEO, Khaled Bouchoucha, there is significant demand and the company is preparing 1,500 orders for customers in Tunisia, Libya, Algeria, Saudi Arabia and even New Zealand.

The Smart Bee device sends real-time updates to a central computer, which analyzes the data and helps the beekeeper react quickly. This technology “has proven its effectiveness” in Tunisia and other countries, told AFP Mr. Bouchoucha, 34, who started to help his father, an occasional beekeeper.

In Tunisia as everywhere in the world, bees are confronted with multiple threats, such as climate change, pollution and pesticides, at the origin of increasingly frequent phenomena of massive disappearances of bee colonies. The information collected on the hive not only makes it possible to estimate the danger but also to know the productivity of each queen and her resistance to climatic variations.

The application thus helps to identify a “model hive” to refine the strains and duplicate its functioning on the farm. When the beekeeper is alerted to a problem, he can either move overheated hives to cooler areas, or isolate those that are too cold, or even provide a sweet solution to bees too weak to overwinter.

Before using this application, Elias was losing around 30% of his hives per year due to humidity and sudden changes in temperature. Since he connected them in 2017, in the experimentation phase of Smart Bee, he only loses 10%, ” in the worst case “he says.

“Before, some bees died gradually without me noticing it early enough”he explains, pointing out that the task of professionals is made difficult by “a constantly changing climate”. “Tunisia suffers from drought almost all year round, which means that habitat and food for bees are disappearing”he said, ensuring that he had to regularly look for new sites where to install them.

The system of “smart hives” also allowed him to increase production to about 12 kg of honey per hive and per year against 8 kg, an increase of about 40%. Elias only has two Smart Bee devices at a unit cost of around 300 dinars (92 euros), which he periodically places on each of his 100 hives but would like to be able to acquire others.

Read also: Article reserved for our subscribers In Tunisia, the perilous project of a reform of food subsidies

This technology can “Help us strengthen our food security and sovereignty. We need it badly in a world full of diseases and wars”, explains Mnaouer Djemali, researcher at the National Institute of Agronomy. In Tunisia, with its population of around 12 million, the sector employs around 13,000 people, according to a local agricultural union, and produces some 2,800 tonnes of honey a year.