In Tunis, hundreds of people demonstrate against President Kaïs Saïed 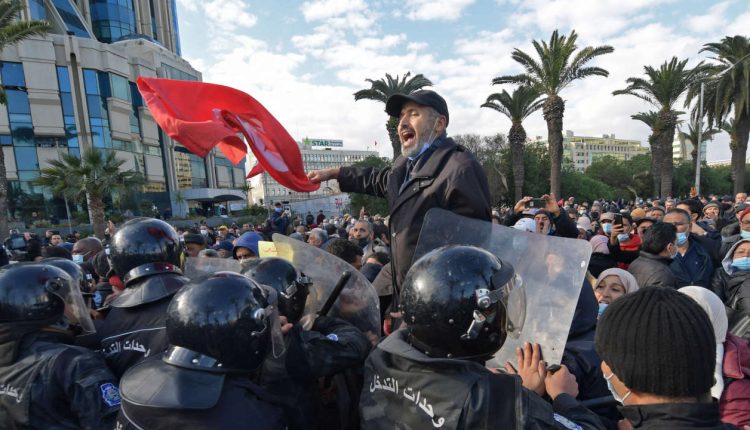 In Tunisia, several hundred people defied an important security device and the ban on demonstrations taken as part of health measures, Friday, January 14, to mark their opposition to President Kaïs Saïed, noted AFP journalists. “Down with the coup d’etat!” », shouted about 300 demonstrators gathered on Mohamed-V Avenue in central Tunis.

An imposing police force has been put in place to prevent demonstrators from accessing the main artery of the capital, Avenue Habib-Bourguiba. Demonstrators who succeeded in breaking the police cordon were dispersed with batons and tear gas, according to AFP journalists, who also reported arrests.

About fifty people managed to get closer to the buildings of the Ministry of the Interior, in a street adjacent to Avenue Habib-Bourguiba. “You work for Sissi and the Emirates”, launched a woman at the address of a policeman, alluding to the fact that the Egyptian leader and the Gulf country are accused by their detractors of having supported the coup de force of Mr. Saïed, on July 25, 2021, when he assumed full powers.

Despite the ban decreed by the authorities on Wednesday due to a strong resurgence of the Covid-19 epidemic, several political parties, including the Islamist-inspired formation Ennahda, had announced the continuation of their rallies on Friday. Ennahda, in the sights of President Saïed – who suspended the Parliament that this party had controlled for ten years – affirmed “refuse the political instrumentalization of the health situation to destroy what remains of fundamental rights and freedoms”.

Read also Article reserved for our subscribers In Tunisia, the government justifies itself after the muscular arrest of an Ennahda leader

These demonstrations come as tensions between Ennahda and Mr. Saïed, already very high since the July coup, rose a notch after the arrest on December 31 and the hospitalization under police surveillance of the one of the strong men of the party, the former justice minister Noureddine Bhiri. Jawhar Ben Mbarek, a figure of the Tunisian left at the head of a collective of opponents to ” Rebellion “ of President Saïed, was also present at one of the demonstrations on Friday.