In the DRC, “this is the first time that chimpanzees have been kidnapped for ransom” 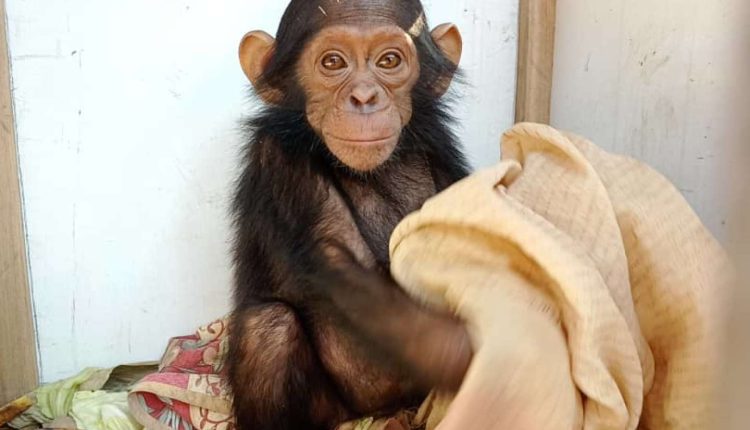 Lost, scared and surrounded by waste: this is how Monga, César and Hussein appear in a video posted on Twitter, Sunday, September 25. Proof of life released by their captors. The three baby chimpanzees were kidnapped by strangers on the night of September 9 from an animal sanctuary in Lubumbashi, capital of the province of Katanga, in the south-east of the Democratic Republic of Congo (DRC).

“The criminals immediately sent a voice note threatening our family and demanding a colossal six-figure ransom”, says Franck Chantereau, the founder of this center which has collected around sixty primates since its foundation sixteen years ago. In addition to Monga, César and Hussein, Franck Chantereau had saved two other chimpanzees since the beginning of the year which he found hiding in the kitchen after the kidnapping. The identity of the kidnappers is unknown. The padlocks were not forced during the kidnapping, raising questions about the complicity of people collaborating with the center.

Read also In the DRC, trafficking and illegal exploitation of the Virunga park would finance armed groups

Named JACK (Young animals confiscated in Katanga), the sanctuary has already been the target of several attacks. The premises were burned down twice, in 2006 and 2015. “When we fight against poaching, we disturb a very organized mafia network”specifies the Lyonnais, installed in the DRC since 1994.

Often hunted and killed for their meat, some 2,000 chimpanzees are also victims of illegal international trade every year, according to the Jane Goodall Institute, a wildlife organization based in the United States. These animals, often originating from West or Central African countries including the DRC, are sent to the Middle East and China, via Cairo, a real traffic hub. On the black market, baby chimpanzees are popular – albeit illegal – pets and can be sold for tens of thousands of dollars.

“But this is the first time they have been kidnapped for ransom”, worries Franck Chantereau. Kidnappings targeting human beings are on the other hand frequently practiced in the DRC by armed groups as a means of financing, particularly in the east of the country. Between March 2017 and March 2020, at least 170 people were taken hostage near Virunga National Park (east), according to Human Rights Watch.

Members of the many militias or armed groups operating in the country, often taking refuge in Congolese forests, also fuel the timber trade which accelerates deforestation and reduces the natural habitat of chimpanzees. Their presence complicates the reintroduction of this endangered species into its environment. “The security situation is so unstable that since the opening of our structure in 2002, no chimpanzee has been able to return to live in national parks”deplores Sylvestre Lubaku, one of the managers of the Lwiro primate rehabilitation center (CRPL), based in the province of South Kivu.

The monkey population has declined considerably in recent decades in the DRC, one of the world’s main reserves of primates, as on the planetary scale. There would remain between 171,000 and 300,000 chimpanzees in the world today against 2 million at the beginning of the 20th century.e century, according to the WWF.