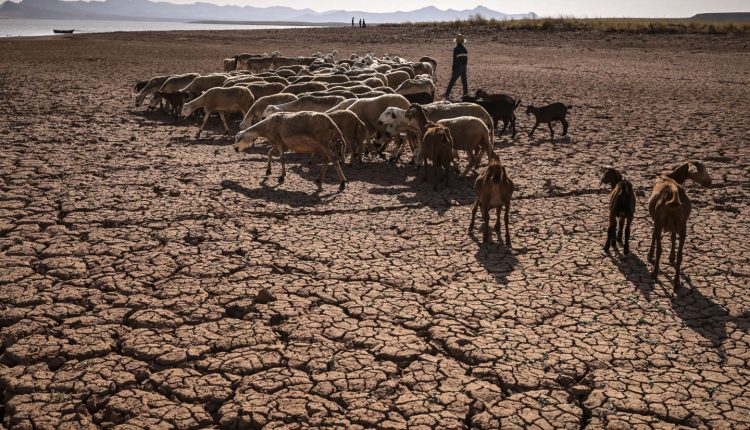 “Seeing villagers running every morning to the fountain or to a neighbor to collect water makes you want to cry”confides Mohamed Sbaï, who has abandoned agriculture because of the successive droughts that have hit his isolated village, 140 km from Casablanca.

A village with once fertile land, Ouled Essi Masseoud is now hard hit by the water stress that threatens all of Morocco. Deprived of running drinking water, this locality located at the foot of the hills gets its supplies only from public fountains or private wells. “The fountains are only operational one or two days a week, the wells are starting to dry up and the river nearby is drying up more and more”explains to AFP Mr. Sbaï, a former peasant. “The scarcity of water makes us suffer”continues the sexagenarian, on his way to collect water from neighbors.

The situation is critical given the geographical position of Ouled Essi Masseoud, located in the agricultural province of Settat, near the Oum Errabia river and the Al-Massira dam, the second largest in Morocco. The filling rate of this reservoir – which supplies drinking water to several cities, including the Moroccan economic capital Casablanca and its 3 million inhabitants – is only 5%, according to the latest official figures. On site, the scale of the disaster is spectacular. The Al-Massira reservoir is nothing more than a pond bordered by a few kilometers of cracked earth, strewn with small shells.

On a national scale, the dams cumulate a filling rate of only 27%. A worrying situation precipitated by the worst drought that Morocco has been going through for at least forty years. With 600m3 of water per inhabitant per year, the North African country is already well below the water shortage threshold, estimated at 1,700 m3 per capita per year, according to the World Health Organization (WHO). For comparison, water availability in the 1960s was four times greater, at 2,600 m3.

This deal places the Cherifian kingdom in “structural water stress situation”, according to a recent World Bank report on the Moroccan economy. Faced with the emergency, the authorities reacted by rationing water consumption.

Read also Article reserved for our subscribers In Morocco, small marijuana growers fear they will be the losers of legalization

The Interior Ministry has ordered local authorities to restrict the supply of water when necessary and prohibits the watering of green spaces and golf courses with drinking water. Withdrawals from wells, springs or watercourses are also prohibited. In the longer term, Morocco has planned the construction of twenty seawater desalination stations by 2030 which should provide a good part of its drinking water needs, according to the Ministry of Equipment.

“We are in crisis management rather than in anticipated risk management”underlines to AFP the expert in water resources Mohamed Jalil, who also judges “difficult to effectively monitor the measures taken by the authorities”.

The other Achilles heel of the country is its agricultural policy “which favors aquavorous fruit growing and marginalizes small producers”, says agronomist Mohamed Srairi. According to Mr. Srairi, this agriculture relies on drip irrigation, which paradoxically results in increased water consumption, to make arid areas cultivable.

The Morocco “tripled” its surfaces irrigated with this technology and this can “having changed cropping decisions so as to increase rather than decrease the total amount of water consumed by the agricultural sector”, according to the World Bank. In fact, more than 80% of water in Morocco goes to agriculture, a key sector of its economy, which represents 14% of GDP.

Read also In Morocco, the failures of the solar strategy

Not far from the Al-Massira dam, Mohamed, a nonagenarian, is posted in front of a small piece of dry land. “We no longer plow because there is no more waterhe breathes, adding that it is necessary “Always accept adversity because you have no choice. » The younger generations of the village seem less resilient. “With the drought, we live in a precarious situation”says Soufiane, a 14-year-old out-of-school shepherd, in a sorry tone, looking at the dam. “I feel like it’s going to get even worse in the future. »