In Mali, the diatribe of the Prime Minister of the junta in New York divides 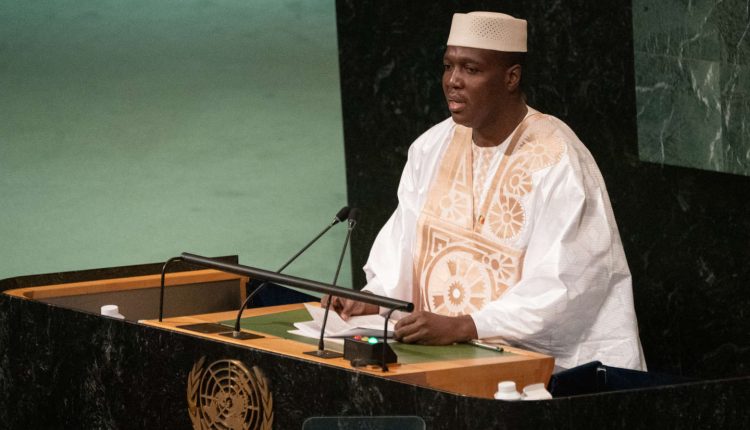 When the Malian junta chose Colonel Abdoulaye Maïga as interim head of government, one of the questions asked was: is there a message? The message he has just delivered to the UN was in any case so little conciliatory that it deeply divided Mali.

Before the General Assembly of the United Nations, Colonel Maïga, in addition to exalting the successes of the junta against the jihadists and the regained sovereignty of his country, carried out a machine-gun attack on Saturday, September 24 against a multitude of targets while quoting Victor Hugo. After months of acrimony and from the platform from which his predecessor had denounced a year earlier “abandonment in mid-flight” of Mali by France, a new settling of accounts with the latter was expected.

But there was also the Secretary General of the United Nations Antonio Guterres, the human rights division of the UN mission in Mali (Minusma), the president of the Economic Community of East African States Ouest (ECOWAS) and the organization itself, which would allow itself to be exploited, as well as the Nigerien and Ivorian presidents. “For every bullet fired at us, we will react with reciprocity”he launched for those who would not have understood the tone of his vindictive and colorful speech delivered in French for 34 minutes.

In Mali, the philippic drew praise to its author for what was described as “crude truths”, for his courage, his eloquence. But although dissenting voices have become rare since the colonels took power in August 2020, some have spoken up to suggest that the authorities have better things to do right now than point at their partners or neighbors. “The voice of Mali resounds like a gong”enthused the government daily The Rise on the front page, “the ears of many foreign critics of the transitional authorities have whistled”.

Conversely, former Prime Minister Moussa Mara (2014-2015) deplored a “belligerent tone”. “The multiplication of slingshots and the adoption of an aggressive posture vis-à-vis the outside are counter-productive” when the country has other concerns, he wrote. Since the putsch of 2020 and especially the second of 2021 consolidating their hold at the head of a country faced with the spread of jihadism and crises of all kinds, the military has cut ties with France and its European allies and turned to Russia.

In the midst of an economic slump, Mali is emerging from a six-month commercial and financial embargo imposed by ECOWAS, but relations continue to be those between an organization which is pushing for the return of civilians and a regime which is promising elections in 2024 after having withdrawn from its initial commitments. Mali is in an open diplomatic crisis with Côte d’Ivoire over the fate of 46 Ivorian soldiers arrested in July.

Read also: Article reserved for our subscribers In Mali, the Islamic State in the Greater Sahara “in a position of supremacy” in the northeast

In France, Abdoulaye Maïga has leveled known accusations. To the Secretary General of the UN and the current President of ECOWAS, Umaro Sissoco Embalo, he reproached their positions in the quarrel with Abidjan; Nigerien President Mohamed Bazoum “is not Nigerian” ; Ivorian President Alassane Ouattara used a trick to obtain a third term.

“A shame for our country”, was moved the president of the Social Democratic Party Ismaël Sacko. Zeidan Ag Sidalamine, a Tuareg community leader, was outraged by “xenophobic and racist remarks” held against the Nigerian president. They have been widely interpreted as an allusion to its communal origin.

“He put Africa to shame”

In a publication on social networks, the Minister Delegate for Foreign Affairs Youssouf Mohamed Elmouctar “strongly condemned the content of the remarks [du colonel Maïga]. The drunkenness of the Malian junta made him forget the sense of protocol and diplomacy.. “He brought Africa and the civilized world to shame”continued the Minister, denouncing ” baseness “ remarks by the head of the Malian government.

The majority deputy Mohamed Saghdoun for his part described Mr. Maïga as “soldier at odds with reality” from his country. In a statement, the elected official criticized “the inability of the Malian army to protect” civilians against “jihadist abuses”pushing “thousands of Malians have taken refuge since 2012 in neighboring Niger”.

Read our analysis: Article reserved for our subscribers Between France and Mali, a hopeless escalation

“Never, ever, has President Bazoum insulted the junta, let alone a neighboring country”commented on Monday the private daily The nation who believes that “this awkward posture discredits the junta a little more” Malian.

The National Union of Workers of Mali, on the contrary, “recognizes himself in all aspects of the statement” of the head of government. Colonel Maïga was appointed interim prime minister in August to replace civilian Choguel Kokalla Maïga, hospitalized a few days earlier.

Holder of the important portfolio of territorial administration, Colonel Maïga was also and remained government spokesman. Dressed in his trellis on national television, he had become the messenger of the most striking announcements and the most abrupt declarations against France.

Read also: Article reserved for our subscribers Mali: the brief arrest of two members of the French Embassy illustrates the climate of tension between Bamako and Paris

With his designation, the two heads of the executive like that of the body in lieu of Parliament are soldiers. The choice of Colonel Maïga had nevertheless raised questions about the intentions of the head of the junta, Colonel Assimi Goïta: simple contingency or desire for openness?

Colonel Maïga is not part of the circle of officers who took power by force with Colonel Goïta in 2020. question for months. An African diplomat stationed in Bamako saw in his appointment “an opportunity to move forward”.