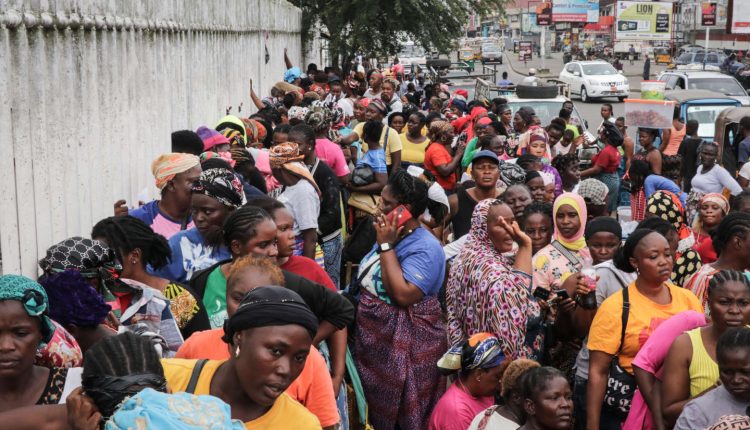 In the Clara Town suburb of Monrovia, Aminata Kanneh sweats in the strong heat of the midday sun. Like dozens of other residents of the capital of Liberia, she queues for a hundred meters to buy rice. “I’ve been coming every day for two weeks, but so far I haven’t gotten a single grain of rice”, confided to AFP this 34-year-old woman. Liberians across the country have been flocking to wholesalers for days to get their hands on the national staple, amid rumors of a possible rice shortage.

Supply chain disruptions and Russia’s invasion of Ukraine have caused food shortages and higher prices across much of the world. But Liberia, a small state of 5 million inhabitants – of which 27.6% live below the international poverty line ($2.15 per day and per person), according to the World Bank – has been particularly affected because of delays in deliveries.

Rice prices have risen steadily over the past six months, reaching the equivalent of around US$25 per 25kg bag, while the price per bag is theoretically set by the authorities at US$13. “I can’t sell a bag for even 20 dollars right now, because the rice has become like gold dust.explains Angeline Sandy, a 27-year-old trader. I bought a bag for 23 dollars, I’m selling it for 30.”

According to Djaounsede Madjiangar, a spokesperson for the World Food Program (WFP) in West Africa, the shortage of rice is due to “delays in delivery”. “The price of rice is clearly influenced by the crisis in Ukraine”he explains, pointing out that about 70% of Liberia’s staple foods, including rice, are imported: “As with many other West African countries, the increase in domestic food prices reflects international trends, determined in large part by the global energy crisis resulting from the Russian and Ukrainian crises. »

A ship “expected in the coming days”

This week, the Ministry of Commerce called on Liberians to “keep calm” and to refrain from panic buying, ensuring that other supplies were on the way. He also urged traders not to speculate on the commodity by stockpiling it. “We want to assure the public that the current stock of rice in the country can serve the market until the arrival of the next ship, which is expected in the next few days”the statement said.

He specified that the government was subsidizing importers to maintain a price cap on this commodity and allocated the “Delivery delays” to an order from the National Ports Authority in August to prevent vessels found to be faulty from docking in the country. The Ministry of Commerce has assured that some 150,000 tons will arrive between mid-October and early November, which will supply the market until the beginning of next year, and that another 22,000 tons are expected “in the next few days”.

Read also: Article reserved for our subscribers “The children manage to have two meals a day, I am satisfied with only one”: in Abidjan, the disarray of working-class neighborhoods in the face of inflation

Liberia also faced fuel shortages earlier this year. Prices had skyrocketed and motorists had been forced to make long queues in front of service stations. Hit by civil war between 1989 and 2003, the Liberian economy was then devastated by the Ebola epidemic in West Africa, which ravaged the country from 2014 to 2016. Liberia also suffers from a strong inflation and regular cash shortages. According to the UN, it is one of the least developed countries in the world.