In Guinea, the reign of impunity for sexual crimes 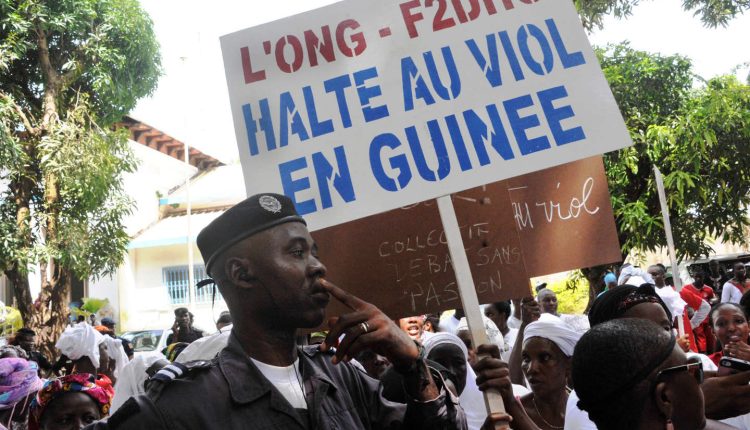 This day in March 2022, after a visit to the central house of Nzérékoré, in the south of Guinea, Hélène Kolkol Zogbélèmou thought ” leave everything “. The human rights activist had just learned that the man who had abused the 12-year-old child whose case she is following had ” faded away “ from jail. “The girl became pregnant and her baby did not survive. The attacker has not even been tried for what he did. He was able to escape by bribing prison officers”, testifies the activist, reached by telephone. For her, one more case that demonstrates the reign of impunity for sexual crimes in Guinea.

This relentless observation, Amnesty International documents it in a report published Tuesday, September 27 on the eve of a historic trial. That of the massacre of September 28, 2009, during which soldiers, police and militiamen killed more than 150 demonstrators and raped 109 women during an opposition rally in a stadium in Conakry.

The NGO’s study reveals that in Guinea, sexual violence affects “in 75% of cases of minors, a large majority of whom are under 13 years old”. Imams, priests, doctors, police officers, teachers… These authority figures – in addition to fathers, uncles, neighbors – are very often implicated in rape cases. The scale of the abuses and crimes is such that Amnesty calls on the authorities to “Urgently adopt a general law on gender-based violence “.

Because even if in recent years, the filing of complaints has tripled, going from 125 in 2018 to more than 400 in 2021 – a sign of a timid freedom of speech – access to justice is akin to a race of ‘obstacles for victims of rape and sexual assault.

Five to ten years in prison

However, the country has recently strengthened its legal arsenal. Since 2016, the criminal code punishes rape with five to ten years’ imprisonment and up to life imprisonment when it results in the death of the victim. Still, the sentences handed down are not always “at the height of the gravity of the crimes committed”, alert the NGO. “It is not uncommon to see alleged rapists continue to roam freely in the same neighborhood as a complainant. They fear for their safety. confirms activist Kadiatou Konaté, co-founder of the Club of Young Girls Leaders of Guinea, contacted by telephone and quoted in the report.

“If you talk, the community deprives you of access to health care, school and even the water pump”

Another major flaw in the survivors’ journey is access to medical care. For lack of means, they cannot afford emergency contraception and thus avoid an unsafe abortion – but also protect themselves against sexually transmitted infections. Without forgetting the medico-legal certificate, also paying. Although not required by law, its absence “becomes a major obstacle to a possible conviction in court”, note the authors of the study. In total, the emergency costs are around one hundred euros, a sum difficult to raise quickly in a country where the average monthly income is 79 euros, according to the World Bank.

Rape also affects the social life of survivors. Amnesty cites the case of the Nzérékoré region, where Hélène Kolkol Zogbélèmou intervenes, which bears witness to the existence of a “embargo” towards those who denounce the aggressors. “If you speak out, the community suddenly deprives you of access to health care, school and even the water pump. You end up leaving the village. And the aggressor is protected”she explains.

Read also: Article reserved for our subscribers Morocco: after the tragedy of Meriem, the government under pressure to reform abortion

Cases of extrajudicial arrangements – such as the payment of restitution through traditional authorities – also undermine the rights of victims. “These pressures lead to the abandonment of the charges”, notes the report. “Customary laws frequently take precedence over the laws of the republic”confirms the lawyer Halimatou Camara, who notes frequent retractions in cases of incest where “the family will impose silence for the cohesion of the group”.

When they succeed despite these obstacles to file a complaint, the victims face the destitution of the investigators. However, since 2009, two special units have been created within the police and the gendarmerie to fight against sexual violence. But “these brigades lack computers, vehicles, mobile phones and scientific equipment to analyze the DNA or sperm collected”, regrets the NGO. To make up for these shortcomings, complainants sometimes have to pay additional costs out of pocket. “Police officers sometimes ask the victim’s family to pay for the arrest of the suspect or the filing of a complaint”, assures Kadiatou Konaté.

While when it came to power in September 2021, the military junta pledged to fight against gender-based violence, Amnesty calls for concrete measures. The NGO recommends “promoting zero tolerance” It front of “harmful gender stereotypes” by setting up awareness and prevention campaigns.

Read also: In Egypt, the savage murder of a student gives way to shock, controversy and voyeurism

Essential provisions to support the work of feminist organizations which have contributed to breaking the omerta by publicly denouncing cases of rape. Among the emblematic cases of recent months is the story of M’mah Sylla. In November 2021, the death of this 25-year-old woman following successive rapes sparked a wave of indignation in the streets of the country. The authorities had expressed their condolences in a press release.

M’mah Sylla had gone to an unauthorized clinic in Conakry for treatment. She had been there “drugged, raped and butchered” by so-called ” doctors “, according to Halimatou Camara, his lawyer. The seven surgeries that followed to treat his injuries were not enough to save his life. “She was racked with guilt because she went to these fake doctors on her own. She was asking me if what happened to her was her fault. confides the activist Djenaba Diallo, president of the association My child, my life, reached by telephone: “We will continue to fight for all rape victims to stop blaming themselves for what they have suffered. »