In Ethiopia, resentment is mounting against Prime Minister Abiy Ahmed among Amhara militiamen 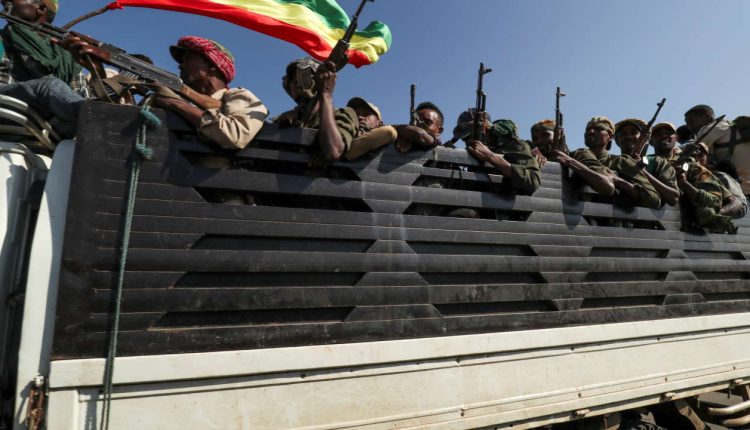 In the streets of Gondar, a former imperial Ethiopian city located in the Amhara region, the celebrations of the Orthodox Epiphany bring together, as every year in January, hundreds of thousands of pilgrims. Minas Alemayehu is content to watch the endless procession from the terrace of his bar. For once, this chief Fano, as the Amhara nationalist militiamen are called, does not take part in the demonstrations of Timkat.

The forty-year-old does not have the heart to celebrate. ” I’m in a period of mourning, we lost seven of our comrades at the front », he says. His loose shirt reveals his many tattoos and the scars of war. Minas Alemayehu was hit twice during the 2021 fighting. ” The war is anything but over »he blurted out about the conflict that has pitted the federal government of Abiy Ahmed and its Amhara and Eritrean allies against the Tigrayan Defense Forces (TDF) for more than a year.

In September, the insurgents approached 100 km from Gondar, before retreating in December to their province of Tigray, which borders the Amhara region. Although spared by the fighting, the sacred city still lives to the rhythm of civil war. The front is less than 200 km away and the hospital continues to receive the wounded who are piled up in a huge gymnasium on a daily basis. Militiamen and armed soldiers who patrol the streets on the occasion of Timkat are celebrated as heroes. The Fano are by far the most acclaimed and sometimes sport their Kalashnikovs among the pilgrims.

There is something misleading about this popular jubilation at a time when the Amhara militiamen are wondering about their collaboration with the federal authorities. Several recent measures by the Prime Minister have caused trouble among their ranks. On January 7, Abiy Ahmed thus pardoned executives of the Tigray People’s Liberation Front (TPLF), the political matrix from which the Tigrayan insurgency emerged and which dominated Ethiopian political life for nearly thirty years.

This decision angered the Ethiopian leader’s Amhara allies, some even speaking of treason. ” Our priority is that the TPLF be completely wiped outassures Demwoz Kassie, one of the representatives of NAMA, a nationalist party close to the Fano which considers the TPLF as the historic enemy of the Amhara. JNever, no, we will never negotiate with them! »

Another concern of the Amhara nationalists: the fate of Wolqayt and Raya. Two fertile territories in western and southern Tigray, disputed for a long time between the two regions. Since the end of 2020, these strategic lands, both economically and militarily, have been controlled by the Amhara authorities and the Fano militiamen. Tens of thousands of Tigrayans were forcibly expelled from it during operations described by the United States as “ethnic cleansing”.

” These lands must be annexed to our region because they are Amharasays Demwoz Kassie. Negotiate on this subject is a red line that the government must not cross! »

In Addis Ababa, however, the future administration of the two territories is still not settled. The government also asked the nationalist militiamen to leave the premises in early January, reinforcing their mistrust.

” NOTWe will continue to fight until the end for Wolkait”declares Negest Yirga, a historical fighter of the Fano, who evokes a conflict of interest with the Prime Minister. ” We are not afraid of the government because we know what sacrifices we made to recover our lands »she challenges.

Could yesterday’s allies end up clashing? Is the Prime Minister tempted to marginalize partners who have become too cumbersome? Conciliation meetings between Fano and the federal authorities in mid-January seem to have calmed things down. But another meeting in the wake, only between Amhara militiamen, led to the announcement of the forthcoming creation of a united Fano command. A way to coordinate the different groups of fighters scattered in the north of the Amhara province.

” Their structuring and the rise of Fano seem to worry the government in Addis Ababaslips an Ethiopian academic who wishes to remain anonymous, even if they have limited manpower and armaments. »

” We are servants of the people, we finance our struggle with our money », says Fano militia leader Minas Alemayehu. The massive influx of members of the Ethiopian diaspora during the holiday season, at the initiative of the Ethiopian government and the majority of whom come from the province, is also a significant reinforcement for him and his brothers in arms. ” Some of them brought us money from abroad to participate in our fight »he acknowledges, without revealing the amount.