In Côte d’Ivoire, the speed of rainforest recovery surprises researchers 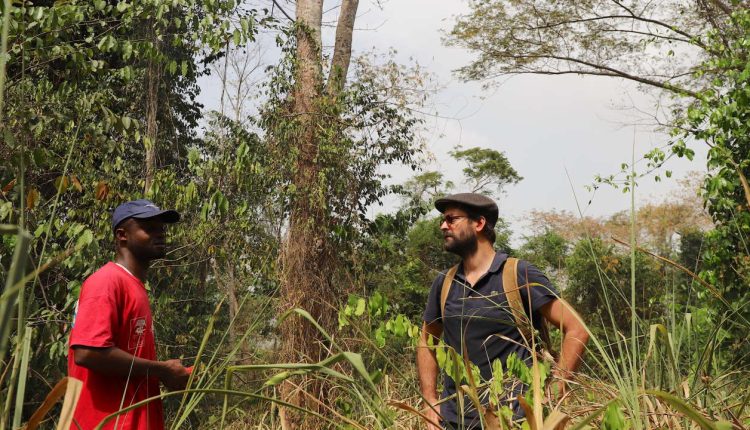 To not miss any African news, subscribe to the “Monde Afrique” newsletter from this link. Every Saturday at 6 am, find a week of news and debates treated by the editorial staff of “Monde Afrique”.

It’s a piece of forest in full revival. A natural environment where, under the canopy that is slowly reforming, vegetation springs up and tall trees spread their roots. In the Téné classified forest, in the center-south of Côte d’Ivoire, a 2,000 square meter plot destroyed by coffee cultivation in the 1990s has rebuilt a large part of its ecosystem in a few decades.

Along with other researchers from the Félix Houphouët-Boigny National Polytechnic Institute (INPHB) in Yamoussoukro, grouped within the DynRecSe project (Dynamics of the reconstitution of ecosystem services), the doctoral student in ecology Amani Bienvenu closely followed this regeneration. “This coffee tree, he said, pointing to an ailing shrub, was abandoned by a planter a little over twenty years ago for lack of interesting yield. He is dying because today the forest is reclaiming its rights. » Without human intervention, ancient primary forests can recover up to 80% of their fertility, structure and tree diversity, just twenty years after agricultural practices have been abandoned. They are then called secondary forests.

Read also Central African forest: what remains to be saved

This natural recovery, much faster than in a temperate zone, surprised scientists. “The complexity of tropical forest ecosystems could suggest that it takes hundreds of years to recover them once lost”emphasizes Bruno Hérault, researcher at the Center for International Cooperation in Agronomic Research (CIRAD).

According to the work of French and Ivorian scientists, forests have the potential to regrow almost entirely thanks to the phenomenon of natural succession, the name given to the progressive and increasingly complex reconstruction of the ecosystem. This rapid regeneration is explained in particular by the “banks” of seeds still present in the soils which have not been damaged or destroyed by intensive agriculture. A restoration also accelerated by the hot and humid climate of the tropics as well as by animal activity.

On the Téné plot, for example, termite mounds are growing near the trunks of large trees. “Termites are animals that stir up the soil enormously and bring mineral elements to the surface.develops Bruno Hérault close to a cheesemonger. Very often in these secondary forests, we will see that the largest trees have sprouted near or on termite mounds. » The work of bats and birds also plays a determining role in the dissemination and distribution of seeds.

In 2019, the Franco-Ivorian team collected data from all the trees present on these 2,000 square meters of forest and on seven other plots in the country. The researchers interviewed former local farmers to better understand the history of the areas and noted the landscape and climatic context before modeling the recovery trajectories of these secondary forests.

Born in Côte d’Ivoire, this methodology is qualified by CIRAD as“unprecedented, more robust and more precise” than the usual models. Here, it is not one or two data that have been analyzed, but a dozen such as soil carbon, biomass, tree size and forest structure.

This innovative approach has inspired other scientists around the world. A network of 80 researchers coordinated by CIRAD and the Dutch University of Wageningen has been set up in Latin America and West Africa. A total of 2,200 plots were analyzed in order to better understand the mechanisms of this natural restoration of tropical forests. The researchers observed that between 1996 and 2015, 2.7 million hectares had regrown in the Atlantic Forest in Brazil. Their findings were published in the journal Science in December 2021.

Their international discovery is intended to help the forest policies of countries threatened by deforestation, such as Côte d’Ivoire, which has lost more than 80% of its forests in sixty years, in particular due to intensive cocoa farming. The American NGO Mighty Earth, which regularly alerts on the state of the world’s forests, revealed in its latest report released in mid-February that Côte d’Ivoire had lost 19,000 hectares of forest since 2019, or 2% of this what remains of its forest cover, because of cocoa farming.

Faced with the degradation of its forest resources, the Ivorian government says it is accelerating the fight against deforestation and forest restoration actions, in particular through reforestation campaigns. But these operations are “very costly and do not promote the diversity of species. It is often only one species of tree that is planted, which does not allow the good development of the fauna and can lead to diseases”indicates Yves Doua-Bi, one of the researchers who participated in the study published in Sciencealso head of technical operations at Sodefor, the state structure responsible for managing the country’s classified forests.

It recommends favoring natural restoration and resorting to reforestation only in the most degraded areas. The interest is twofold for Sodefor, which protects classified forests and exploits them on a well-defined surface to sell the wood. “If we still want to have wood in these places, we will have to readjust the strategy”insists the man with the double hat who wants to integrate the population into the process: “When the peasants settle down, they burn the place. It is necessary to change mentalities, to associate with them to introduce the trees in parcels and thus to allow after the abandonment of the fields that the forest regains its rights. »

All these discoveries and recommendations are bearing fruit, since the specialized organizations already wish to invest. The European Forest Institute, for example, “wants to use our results to implement forest restoration strategies in Côte d’Ivoire funded by GIZ, the German international development cooperation agency”notes Bruno Hérault.

Climate crisis: Many rivers had less…