In Burkina Faso, demonstration in Ouagadougou against a West African visit 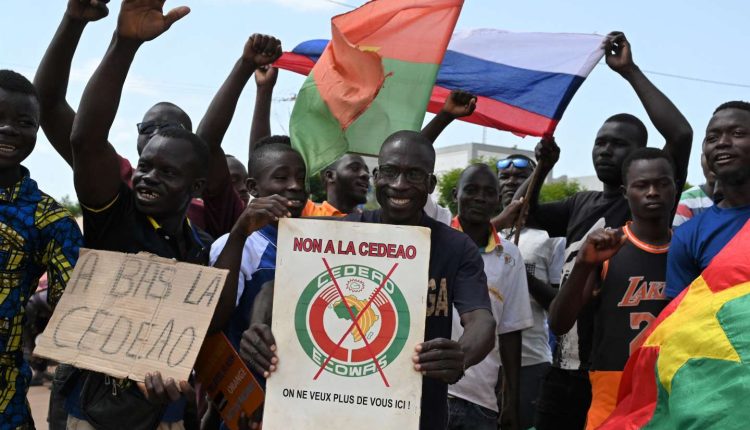 Several dozen people demonstrated Tuesday, October 4 in Ouagadougou against the visit of a West African delegation to assess the situation in Burkina Faso a few days after a second coup in eight months.

Waving Russian flags and shouting slogans to the glory of Moscow, the demonstrators displayed their hostility to the Economic Community of West African States (ECOWAS) and France, noted an AFP journalist. “No to ECOWAS interference”, “France gets out”, “Together let’s say no to France” or “Long live Russia-Burkina cooperation”could be heard from the demonstrators gathered on the avenue leading to the Burkinabe presidency.

The ECOWAS delegation arrived on Tuesday morning and was due to go to the presidency to meet the country’s new strongman, Captain Ibrahim Traoré, AFP learned from an official Burkinabe source.

“This mission is to make contact with the new authorities of the transition within the framework of the support from which our country benefits” on the part of its West African neighbors, said in a press release Captain Traoré, who overthrew Lieutenant-Colonel Paul-Henri Sandaogo Damiba on Friday, October 30, himself who came to power during a putsch in January.

“Call for calm” and “restraint”

Ibrahim Traoré took the opportunity to warn anti-ECOWAS demonstrators that “Anyone who undertakes acts likely to disrupt the smooth running of the ECOWAS mission will be subject to the rigor of the law”. Regretting “the circulation of messages calling for preventing the smooth running of this mission”he renewed “his call for calm” and “withholding”.

Before the demonstration on Tuesday morning, small groups had set up roadblocks overnight in the center of Ouagadougou to protest against the visit of the delegation, and messages calling for obstructing its visit were posted on social networks. During the weekend, diplomatic buildings and buildings representing the interests of France had been attacked by demonstrators favorable to Captain Traoré.

After initially opposing his dismissal, Lieutenant-Colonel Damiba ended up agreeing to resign on Sunday and leave for Lomé. At the end of last week, demonstrators who demanded the departure of Mr. Damiba, accused of having been protected by Paris, had already waved Russian flags, asking for a strengthening of military cooperation with Moscow. Russian influence continues to grow in several French-speaking African countries, particularly in Mali and the Central African Republic.

ECOWAS is regularly accused by its opponents of systematically defending the leaders in place without taking into account popular aspirations, and some of its leaders of being subservient to the former French colonial power.

“Deterioration of the security situation”

The ECOWAS delegation in Ouagadougou is led by the Bissau-Guinean Minister of Foreign Affairs, Suzi Carla Barbosa, whose country holds the presidency of the organization, and notably includes the former Nigerien President Mahamadou Issoufou, mediator for Burkina Faso .

She comes to assess the situation in Burkina Faso after the departure of Mr. Damiba, whom Captain Traoré blamed in particular “the continued deterioration of the security situation” in a country undermined by jihadist violence and where bloody attacks against civilians and soldiers have multiplied in recent months.

Read also: Article reserved for our subscribers Burkina Faso: in Djibo, a life under a jihadist blockade

Since 2015, regular attacks by armed movements affiliated with Al-Qaeda and the Islamic State group have killed thousands and displaced some 2 million people. Captain Traoré has promised to respect the commitments made by his predecessor to ECOWAS on the organization of elections and a return of civilians to power no later than July 2024.

“Bias, the camp of contempt”, on France.tv: when France parked the harkis…

In Chad, after the repression of October 20, 342 demonstrators sentenced and a junta…

Morocco-Spain: Achraf Hakimi, the star of the Atlas Lions made in Spain

In Sudan, a first step towards a way out of the crisis