In Amboise, memorial vandalism against the statue of Emir Abdelkader 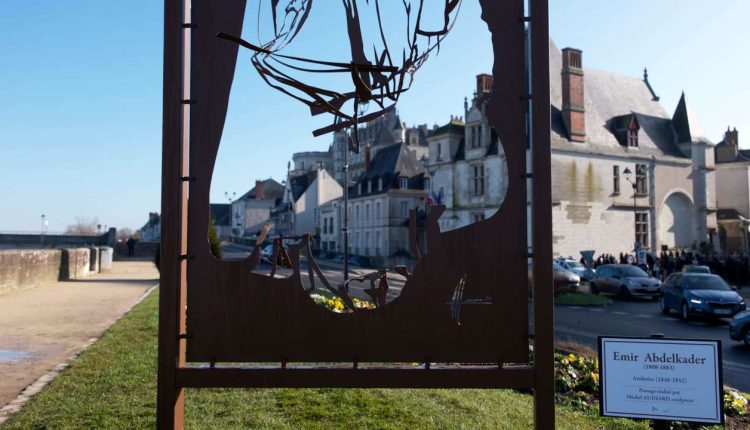 A big hole, bitter void, adorned with twisted lineaments of metal. Emir Abdelkader (1808-1883) had the lower part of his gandoura amputated in the early morning of Saturday February 5 in Amboise (Indre-et-Loire) a few hours before the official inauguration of a statue erected in his honor. The act of vandalism obviously did not only target the work of Michel Audiard, an artist familiar with portraits chiseled in a sheet of rusty steel. Above all, it targeted the symbol of this hero of the Algerian resistance to the French conquest who, after his captivity and his house arrest at the royal castle of Amboise (1848-1852), became a pioneer of interreligious dialogue, in short a figure of Franco-Algerian friendship.

The authors of the package had apparently matured their project, waiting for the end of the gendarmerie rounds – at 4 am – to operate their grinder.

Stuck in the grass, the jagged silhouette of the emir is heavy with meaning, icy as a winter morning on the banks of the Loire. The tribute that was to be paid to him, and which was maintained despite the outrage, is part of the series of gestures recommended by the report of the historian Benjamin Stora on the memorial reconciliation between France and Algeria.

Read also France-Algeria: the 22 recommendations of the Stora report

After discovering the package, the small assembly of elected officials, state representatives, Algerian officials and Amboisiens expressed their emotion. The mayor of Amboise, Thierry Boutard, denounced the “foolishness” of one “despicable rampage” in “period when some take pleasure in the hatred of others” and the “rewriting history”. The Algerian ambassador to France, Mohamed Antar Daoud, present at the scene, called for “overcome what is only an act of vandalism”claiming that the “fight for friendship between France and Algeria continues”.

The shock wave spread all day. “Let’s remember what unites us, The Republic will not erase any trace or any name from its history”, reacted the President of the Republic Emmanuel Macron. Interior Minister Gérald Darmanin castigated a “profoundly stupid act”. As for Benjamin Stora, the inspiration behind the Head of State’s memorial policy on Algeria, he expressed his “dismay” in the face of this “serious challenge to the state” from“illiterate people who do not even know the multi-faceted life of Abdelkader”.

The concert of indignation is commensurate with a thick malaise. Because it is the first criminal act targeting the sequence of memorial gestures initiated a year ago in the wake of the publication of the Stora report. The controversies fueled by certain representatives of different remembrance groups – Algerian nationalists, harkis, repatriated people… – on the Elysian approach to the sulphurous heritage of the Algerian war had certainly not been lacking. But they remained purely rhetorical.

You have 51.93% of this article left to read. The following is for subscribers only.