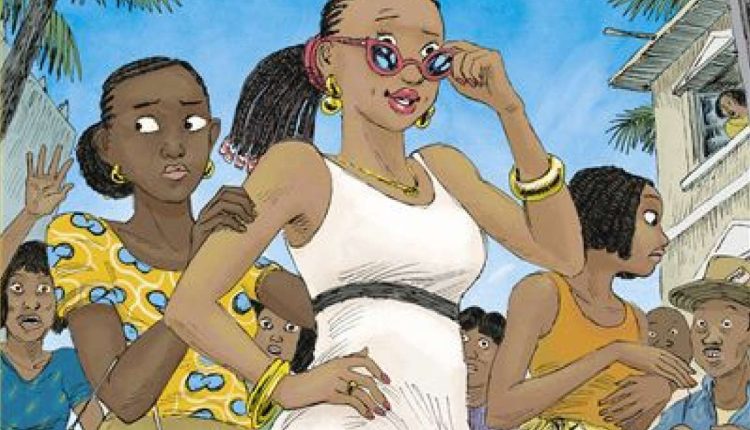 At Fnac in Abidjan, the first 150 copies of the comic book went like hotcakes as soon as it was released on Wednesday September 14. Many readers eagerly awaited to discover the new adventures of “the beautiful Aya”, young Ivorian from the popular commune from Yopougon. Comics “to 800,000 readers”, whose saga was published by Gallimard from 2005 to 2010, translated into fifteen languages ​​and even adapted into an animated film in 2013, has indeed lost none of its popularity.

In this highly anticipated seventh volume ofAya from Yopougon (the previous one dates back twelve years!), Marguerite Abouet in pen and Clément Oubrerie in pencil reconnect with everything that made the charm and success of the series: line, tone, sensitivity, humor and nouchi, Ivorian slang. Without forgetting the palette of colorful characters who draw a human and living landscape of Yopougon, and more broadly of Côte d’Ivoire.

This time, we are in 1981, in the last years of the “Ivorian miracle”, a period of strong economic development thanks in particular to the production and export of cocoa. The emblematic characters have grown up a bit, the younger ones have more responsibilities. The three friends of Yopougon now lead very different lives. Aya left medical school for law, Bintou alias “Flora” is an unloved television actress, while Adjoua juggles between her maquis and Bobby, her son born into lies and misunderstandings at the start of the adventures. from Aya. Innocent says “Inno”, Aya’s best friend, is still in France and tries to get by, without papers, in a country where being homosexual and black is not yet so easy.

Marguerite Abouet humorously transcribes the often comical adventures of daily life in Abidjan, the relationship to money, alcohol, traditions. She explores the issues of Ivorian society that are sometimes taboo. The first volumes dealt in particular with the questions of abortion, infidelity, polygamy and homosexuality. This last theme is extensively covered in this new volume, as is poor housing in Ivorian universities and the rights of students, of which Aya wants to be the defender.

If Aya’s adventures take place between the end of the 1970s and the beginning of the 1980s, most of the subjects covered are still very topical in Côte d’Ivoire. Despite promises to expand and renovate student halls of residence, many students still sleep in lecture halls or outside of classrooms.

“I was looking forward to it”

For Laure Gnagbé Blédou, editorial and marketing director at Bayard Afrique, Marguerite Abouet’s tour de force is to succeed in immersing the reader, wherever he comes from, in the Ivory Coast of yesterday and today. today. ” In Ayah, the characters’ issues and stories are universal, even though the setting and references are Ivorianshe points out. While people here are used to immersing themselves in stories of Americans, Europeans, it’s interesting to see that it can work on both sides. »

Read also Article reserved for our subscribers A drink with Marguerite Abouet: “It’s important that there are series whose heroes are black”

A week after the release of the comic strip, the Des Livres pour tous libraries, founded by Marguerite Abouet in several municipalities in Abidjan, are also offering the latest volume. “I was looking forward to it and it is very good. Aya has grown up, she has more responsibilities, more challengesobserves Sonia Arruda Touré, head of the association. As usual, the author recounts the concerns of the time, the position of women, student demands… Her commitment has not changed. » The 112 pages devour each other and will inevitably call for others in view of the twists and turns that punctuate this new part.