Charles Blé Goudé back in Ivory Coast under the sign of peace: “My role is not to revolt you” 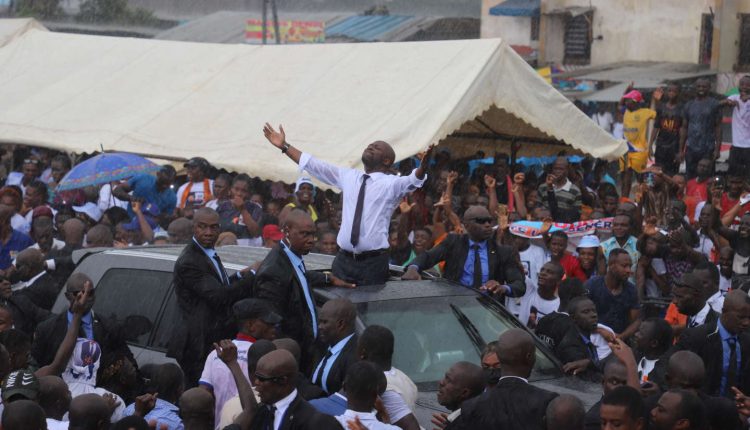 It was not a comeback ” sober “ and “without triumphalism”, as he had announced. Charles Blé Goudé arrived on Saturday November 26 at CP1 square in the Abidjan commune of Yopougon, like a campaigning candidate. Standing from the sunroof of his car despite the pouring rain, the former youth minister of ex-president Laurent Gbagbo, overjoyed, slowly split a delirious crowd, taking the time to shake hands, to dance, and repeat a gesture, finger on his watch, to show that it was time to reunite with his supporters present by the thousands.

Returning from more than ten years of exile and prison, Charles Blé Goudé was first welcomed at Félix-Houphouët-Boigny airport in Abidjan, by a dozen relatives only for security reasons. His first gesture was to kneel on the tarmac, before finding in particular the former first lady Simone Gbagbo as well as Pascal Affi N’Guessan, the president of the Ivorian Popular Front (FPI), the historic party of the Ivorian left.

The ” Party “ announced, it did indeed take place. The rain even made her crazier. On the sounds of the stars of zouglou Yodé and Siro or Didier Bilé, relatives, sympathizers and activists, overexcited, sang and danced while waiting for the speech of the hero of the day. “Today, I am sick, I have malaria. I’m willing to die to see it. I don’t want to be told the story of his comeback, I want to see it with my own eyes.”shouts in the front row, Lambert Babri, departmental head of the Pan-African Congress for Justice and Equality of Peoples (Cojep), the small party of which Charles Blé Goudé is president.

On stage for more than thirty minutes, Charles Blé Goudé did not lose the verve and the verb which in the 2000s had earned him the nickname of “general of the street”. He was then the charismatic leader of the pro-Gbagbo youth, able to mobilize militants to defend the former Ivorian president, sometimes during violent demonstrations, against French neocolonialism and the rebels. “Today is a day of thanks (…) I know how to be grateful. When you hurt, I say it. But when you’ve done well, I know how to recognize it. I would like to say thank you to the authorities of Côte d’Ivoire who facilitated my return, he insisted. If I see you today, it’s thanks to them. »

Charles Blé Goudé played the card of national reconciliation. After one ” minute “ of silence in tribute to some 3,000 dead in the post-electoral crisis of 2010-2011, the former leader of the Young Patriots clarified his project: “From my prison cell, I dreamed of this moment, he launched to the sympathizers. My role is not to revolt you. Because this country has been hurt, these people have been traumatized. You need a speech that reassures you. (…) My duty is to support this peace process. »

And while he had wished this moment wasn’t a “political meeting”the ghost finally did not know how to do otherwise. “I heard someone say ‘Blé Goudé will be our next president’. Who said that ? Who said that ? »he asked an audience raising their hands and shouting “Presi, presi”.

Since his acquittal on March 31, 2021 by the International Criminal Court (ICC) in The Hague of the crimes against humanity of which he was accused, alongside Laurent Gbagbo, Charles Blé Goudé has not hidden his presidential ambitions. “Today is my first day, I’m not going to talk too much about politics, because I’m not passing through, I came here for good. I will have time to talk to you. In this same place, we will hold a political meeting where I will discuss all the subjects, he announced. It’s time for truth. »

As he used to in the past, he used proverbs and expressions from his repertoire to make the crowd laugh. “My grandfather told me: it is during the dry season that the tree counts the leaves that have remained faithful to it”he launched to his loyal supporters.

Shortly before her speech, Simone Gbagbo wanted to say ” only one word “ to Charles Blé Goudé: “We are very happy. (…) We have a nation and a people to build, and with your energy I am sure that you will come and take your part, so that Côte d’Ivoire may be magnified and glorified. » Syears surprise, the ex-president Laurent Gbagbo, on the other hand, did not come to welcome his ” son “ with whom ties have been relaxed, but he had sent five people to represent his new party, the PPA-CI. During his speech, the “son” had no words for his ex-mentor.