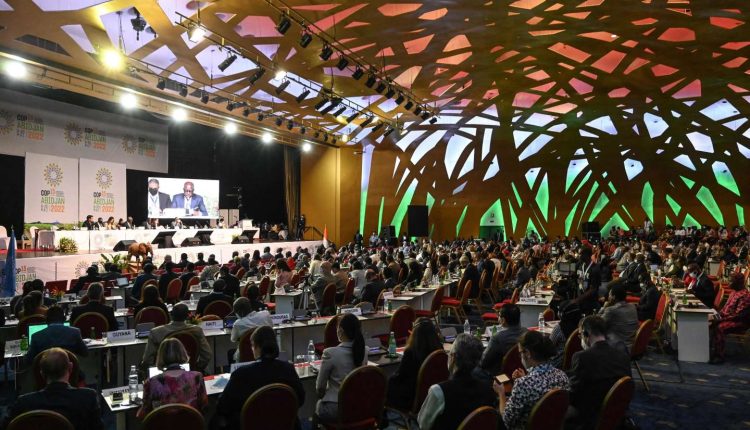 It was in front of a sparse audience that the fifteenth Conference of the Parties (COP15) against desertification ended on the evening of Friday, May 20. At the final hammer blow by Alain-Richard Donwahi, the Ivorian President of COP15, the delegates of the 196 Member States of the United Nations Convention to Combat Desertification politely applauded, without euphoria or outpouring of joy, the decisions announced at the end of the discussions started eleven days earlier, on May 9, in Abidjan, the economic capital of Côte d’Ivoire.

Read also: Article reserved for our subscribers In Côte d’Ivoire, the COP15 against desertification has a president entangled in a timber trafficking scandal

These provide in particular “accelerating the restoration of one billion hectares of degraded land by 2030”the reinforcement “drought resilience by identifying the expansion of drylands” and the improvement of “the involvement of women in land management”. Particular attention was also paid to the issue of gender, which was the subject of an entire caucus and a joint political declaration. So many commitments that must respond to the challenges of desertification; a phenomenon which, according to a report published by the UN a few days before the start of the summit, concerns 40% of the emerged lands and already affects about half of humanity.

Read also: Article reserved for our subscribers Land degradation affects half of the world’s population

At the end of the deliberations, the delegations also welcomed the inclusion, for the first time, of the land issue. Referring to the case of the Sahel where the pressure on land is very strong, it was regularly recalled during the discussions that the establishment of a land tenure system was an essential prerequisite for an effective fight against land degradation, and consequently , the occurrence of conflicts and population displacements.

But, faced with the urgency and scale of the issues, some delegates did not hide their disappointment. “We are not up to it, it’s a missed opportunity”, regretted a West African diplomat in the corridors of the Conference. Like him, many delegates from the African continent hoped to add an additional protocol on drought to the United Nations Convention to Combat Desertification.

“As if shifting the discussion pushed back the urgency”

Inspired by the Kyoto Protocol, this binding legal instrument would have made it possible to attract funding to combat drought and its consequences, in addition to encouraging the countries affected by this climatic phenomenon to set up national action plans including, in particular, early warning systems. According to our information, during the negotiations, the American delegation opposed a clear refusal to this draft protocol, objecting to the significant aid already planned, according to it, to respond to the hazards caused by the drought. In the absence of an agreement, a “intergovernmental working group on drought” was created and the subject will be on the negotiating table again at COP16, which will take place in 2024 in Saudi Arabia. “As if shifting the discussion allowed us to push back the urgency” cowardly, resigned, the diplomat mentioned above whose country is particularly affected by the drought.

You have 43.03% of this article left to read. The following is for subscribers only.