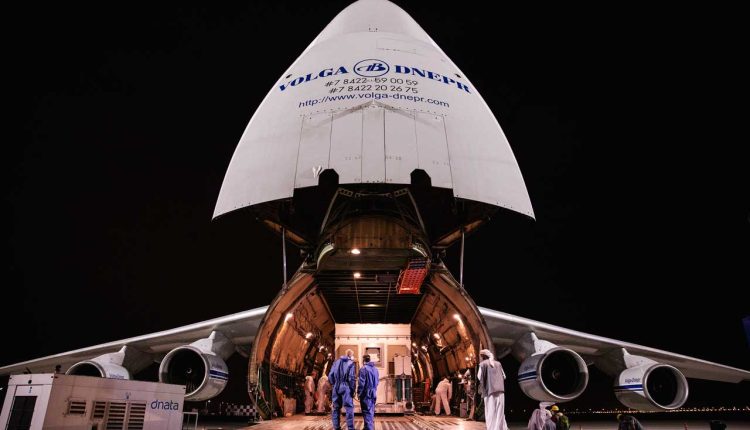 The meeting of the late Sheikh Zayed bin Sultan Al Nahyan, “May God rest his soul in peace,” with the team responsible for the “Apollo 15” flight to the moon, in the seventies of the last century, depicted the UAE’s path to outer space, as it ascended to Mars, then the moon, then Venus, all the way to To build the first human settlement on the Red Planet in the year 2117, and this meeting embodied the beginning of an ambitious journey towards a national space sector, which culminated in achievements that enabled the UAE to reserve a seat for it in the list of top makers of the global space sector in record time, and consolidated its advanced position in the space sector. This will be reinforced by the Abu Dhabi Space Dialogue, which will be hosted by the capital on December 5 and 6, under the generous patronage of His Highness Sheikh Mohammed bin Zayed Al Nahyan, President of the State, “may God protect him,” and with the participation of decision-makers, space agencies and elite experts in the global space sector from more than 54 countries. nation.

During this meeting, the late Sheikh Zayed presented a number of important messages that reflected the leadership’s vision and ambition, and emphasized the importance of appreciating science and achievements and believing in their role in the development of peoples and societies. A human being on the face of the earth, because it embodies faith in God and His power, and we, as Arabs, feel that we have a great role in this project and in these researches, and we are proud of the tremendous progress in space science, thanks to the rules laid down by Arab scientists hundreds of years ago.

During the first fifty years of the federation’s life, the UAE made successive achievements in the field of outer space exploration, based on the UAE Vision 2021 and the UAE Centennial 2071, as today it has 19 orbital satellites, more than 10 new space objects under development, and more than 50 companies. And a global and emerging space institution and facility, 5 research centers for space sciences and 3 universities to train national cadres, and the UAE has become the fifth country in the world to succeed in reaching the orbit of Mars for the first time, after the “Probe of Hope” managed on February 9 of the year 2021 to reach the Red Planet. Successfully, and in September 2019, Hazza Al Mansouri became the first Emirati astronaut, and the first Arab astronaut to reach the International Space Station.

In the next fifty years, the UAE seeks to enhance its achievements over the past fifty and consolidate its global presence, by launching ambitious space projects in line with the UAE Centennial 2071, which aims to enhance the role of the space sector and its contribution to making the UAE one of the best countries in the world.

The late Sheikh Zayed bin Sultan Al Nahyan, may God rest his soul, had an insight into the space sector and gained his attention. , and innovative communication solutions for many sectors, as the year 2000 witnessed the launch of the first satellite for mobile communications, Thuraya 1.

In 2007, the Al Yah Satellite Communications Company “Yahsat” was established, which is today one of the top ten operators of satellite services in the world. Networking and mobile communications solutions.

The launch of the “DubaiSat-1” satellite, in 2009, which is considered the first Emirati satellite for remote sensing, constituted a new stage in building decisions based on data and data at that time, as this satellite contributed to providing data for many civil applications such as: planning Cities, urban development, scientific research, telephony, transportation, civil engineering and construction, mapping, and geological research.

With the aim of organizing and developing the national space sector, the year 2014 witnessed the establishment of the Emirates Space Agency to contribute to supporting a sustainable national economy, developing human resources, supporting research and development projects in the space sector, and strengthening and highlighting the country’s role on the regional and global space map.

Since the establishment of the agency, the UAE space sector has witnessed successive developments in implementation of well-studied strategies. In 2016, the National Space Policy was launched, which outlined directions and goals to be achieved in the field of space.

The year 2017 witnessed the launch of the National Space Program, which included a plan for a hundred years with the aim of building the first human settlement on the Red Planet by the year 2117. The UAE Astronaut Program was also launched to establish the infrastructure for the UAE space sector and to qualify Emirati astronauts. On September 25, 2019 to the International Space Station, becoming the first Arab astronaut to reach the International Station.

In a historic achievement that adds to the UAE’s track record in various fields, and establishes a new stage in the national space sector, the UAE launched on October 29, 2018 the KhalifaSat satellite, which

It is the first satellite to be manufactured with 100 percent Emirati expertise and hands, and it is intended for Earth observation purposes, which establishes the UAE’s position as a leading country in the space science sector in the world, and an Emirati technology icon to serve humanity.

In 2018, the UAE announced the selection of the first two Emirati astronauts, Hazza Ali Abdan Khalfan Al Mansouri and Sultan Saif Muftah Hamad Al Neyadi, in cooperation with the Russian Space Agency “Roskosmos”, from among 4,022 young Emirati men and women who took the tests, within the Emirates Astronaut Programme, aimed at qualifying And sending Emirati astronauts to outer space to carry out scientific missions.

The UAE was keen to establish a legislative framework that regulates the space sector, and prepares a legislative and regulatory environment that is consistent with other laws and regulations in the country, and respects international treaties. In late 2019, it issued a law regulating the space sector, which is considered the first of its kind on the Arab and Islamic level.
On September 25, 2019, Emirati astronaut Hazzaa Al Mansouri arrived at the International Space Station, becoming the first Arab astronaut to reach the International Station, as his mission included scientific experiments in addition to documenting the daily lives of astronauts aboard the International Station.

On June 20, 2020, the UAE launched the “Probe of Hope” to Mars to understand climate changes on the red planet, discover the causes of the erosion of its atmosphere, and the lack of an environment suitable for life on its surface, and the “Probe of Hope” succeeded on the ninth of February 2021 in entering the capture orbit around the planet. Red, making the UAE the fifth country in the world to successfully reach the orbit of Mars for the first time.

On September 29, 2020, the UAE announced the first Arab scientific mission to explore the moon, as part of the strategy launched by the Mohammed bin Rashid Space Center “2021-2031”. The project includes the development and launch of the first Emirati lunar explorer under the name “Rashid”, which is designed and built with Emirati efforts. 100%, so that the UAE will be the fourth country in the world to participate in missions to explore the moon for scientific purposes, and the first Arab country to carry out a space mission to explore the surface of the moon.

October 2020 witnessed the announcement of the UAE satellite project “MBZ-Sat”, the second Emirati satellite to be fully built and developed by a team of Emirati engineers, after the “KhalifaSat” satellite.

The “MBZ-Sat”, which the Mohammed Bin Rashid Space Center in Dubai is working on, will be the most advanced civilian satellite in the region in the field of high-resolution space imaging, as it is expected to be launched in 2023.
In October 2021, the UAE revealed a new mission in the field of space, which includes the construction of an Emirati spacecraft that will travel a 3.6 billion km journey, during which it will pass by seven asteroids within the solar system and carry out a historic landing on the last asteroid within its five-year journey.

It will take 7 years to develop the vehicle, and it will be ready to launch on its space flight, within a launch window set for the beginning of 2028.
The UAE’s achievements in the space industry sector and its exploration continue. In the current year 2022, the first economic space zone was established in Masdar City to establish an integrated business system to support emerging companies and small and medium enterprises. It will be launched by the Emirates Space Agency to support the building of a competitive private sector, build national capabilities in the field of space, and contribute to the economic growth of the UAE over the next fifty years.

This year also witnessed the launch of the National Radar Satellite Program “Swarm”, and the establishment of the “National Space Fund” with a capital of 3 billion dirhams to develop strategic and research projects in the space sector and support the establishment of national companies in space technology.

The UAE also won the presidency of the United Nations Committee for the Peaceful Use of Outer Space (COBOS). The committee, which was established for the first time in 1959 and is affiliated with the United Nations Office for Outer Space Affairs, is tasked with organizing the exploration and use of space for the benefit of humanity for the sake of peace, security and development, and encouraging space research programs. It plays a pivotal role in building policies to ensure the sustainability of space, in addition to encouraging the adoption of regulatory frameworks calling for responsible behaviour.
The UAE’s journey with the space sector continues, armed with a vision of leadership that looks forward to the future, aspirations that embrace the sky, and the determination of a people that does not know the impossible.

1974 .. The beginning of the UAE’s ambition to establish a national space sector.
1997 .. Establishing the “Thuraya Telecom” company.
2006 .. Transitioning from operating to manufacturing satellites through the establishment of the Emirates Foundation for Advanced Science and Technology (East).
2007 .. Establishment of Yahsat Satellite Communications Company.
2014 .. Establishment of the Emirates Space Agency.
2015.. The launch of the Mohammed bin Rashid Space Center.
2016.. Launching the National Space Policy.
2017.. Launching the UAE Astronaut Program.
2018 .. Launching the KhalifaSat satellite.
2019 .. Hazza Al Mansouri’s arrival at the International Space Station and the issuance of the Space Law.
2020.. The launch of the Hope Probe to Mars, the announcement of the “Moon Exploration” mission, and the launch of the “Arab Space Geniuses”.
2021.. Announcement of the Emirates mission to explore the asteroid belt in the solar system.
2022..
 Launching the National Program for Radar Satellites “Swarm”.
 Establishing the “National Space Fund” with a capital of 3 billion dirhams.
 The UAE won the chairmanship of the United Nations Committee for the Peaceful Use of Outer Space (COPOS).