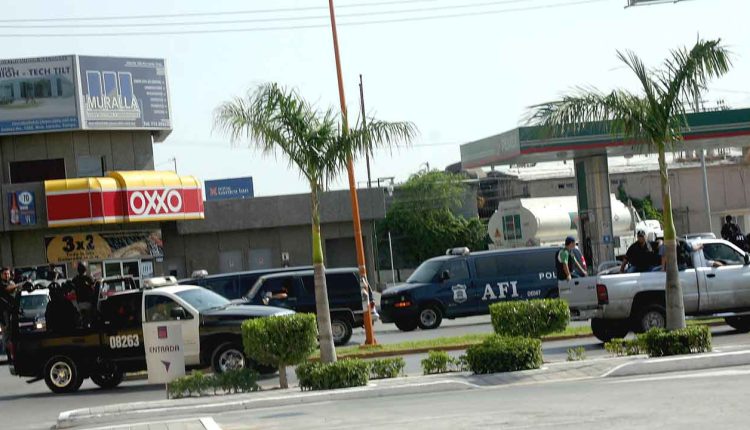 A shootout in border city of Nuevo Laredo Wednesday has left one Mexican soldier and seven suspected members of a cartel dead, officials said.

Tamaulipas Police said the servicemen in the area were shot at, with one death and seven additional soldiers wounded.

Seven of the attackers were also killed in the firefight.

The exchange of gunfire took place just three miles south of the U.S. border and is only the latest of a string of violent incidents in the area. Last month, the U.S. Consulate issued advisories for Americans to shelter in place due to the sustained level of danger.

US CITIZEN ON THE RUN AFTER KILLING MULTIPLE PROSTITUTES AFTER SEX IN MEXICO, OFFICIALS SAY

A Google Earth image shows the Laredo Port of Entry at the World Trade Bridge between south Texas and Mexico.
(Google Earth)

Officials released the advisory on Nov. 28 stating that the, “Consulate has received reports of multiple gunfights throughout the city of Nuevo Laredo following an arrest operation.”

Mexican President Andrés Manuel López Obrador said previous shootings came in response to the arrest of a cartel leader. The city has long been dominated by the Northeast Cartel, an offshoot of the old Zetas gang.

The AFI, the Mexican law enforcement equivalent of the FBI, on patrol in Nuevo Laredo, Mexico, on Aug. 1, 2005.
(Janet Schwartz/MCT/Tribune News Service via Getty Images)

Many cartels in Mexico react to the arrest of leading members by creating chaos, either to avoid the detention or transfer of suspects or to pressure authorities to release them. López Obrador said the suspect had already been taken to Mexico City.