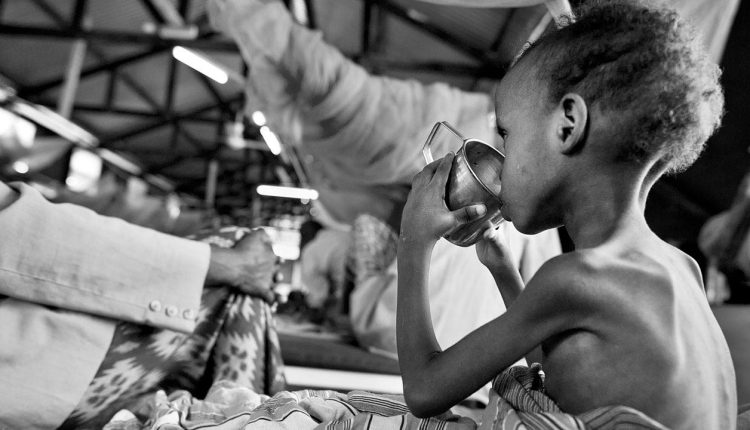 Somalia is on the brink of its worst famine in half a century as drought intensifies and global food prices soar, leaving hundreds of thousands of people at risk of dying from starvation.

The United Nations has warned that parts of the country will be hit by famine in the coming weeks – and the projection is it will be more severe than in 2011, when famine killed more than a quarter of a million people there, about half of them children.

More than $2.2 billion is needed to provide food, water, shelter, health and sanitation and other support to drought-hit communities, but Somalia has only received about half of that from foreign donors.

“The international community must not wait for a famine declaration to act,” U.N. Population Fund (UNFPA) Executive Director Natalia Kanem told the Thomson Reuters Foundation after visiting Somalia this month. “We need to get in there with a life-saving response now.”

Aid workers said the threshold for famine had already been passed in some areas, calling for an immediate official declaration, which would draw global attention to the disaster, mobilise much-needed foreign aid and save lives.

“We have been raising the alarm about famine for months but aid has been slow. Now we are facing a catastrophic situation, people are dying,” said Adil Al-Mahi, head of the charity Oxfam in Somalia. “A declaration of famine will certainly bring in more support.”

But declaring famine is a complex process which is highly influenced by politics. Here are some facts:

A Somali child severely malnourished is seen at the Medecins Sans Frontieres hospital in the Dagahaley refugee camp on Aug. 20, 2011.
(Lynsey Addario/Getty Images)

What is a famine?

Famine is declared in an area when severe hunger is already widespread, and when people have started dying of starvation because they do not have enough nutritious food.

According to the United Nations, the affected area must meet three conditions:

– At least 20% of the population is facing extreme food shortages

– At least 30% of children are suffering from acute malnutrition

– At least two people out of every 10,000 inhabitants are dying each day due to starvation, or a combination of severe hunger and illness

Why is Somalia facing another famine?

Climate change is the main reason, say aid workers. Somalia – and parts of neighbouring Ethiopia and Kenya – are facing the fifth failed rainy season in a row.

This has pushed vulnerable populations – already hit by years of insurgency by Islamist insurgents al Shabaab and loss of income due to the COVID-19 pandemic – to the brink.

Hunger has been worsened due to the soaring cost of grain, fuel and fertilizer following Russia’s invasion of Ukraine. Somalia relies on Russia and Ukraine for 90% of its wheat, and prices of some basic commodities have risen by up to 160%.

How is the drought affecting Somalis?

About 6.7 million people – nearly half the country’s population – face severe hunger as a lack of rain for more than two years has decimated their crops and killed livestock.

More than one million people have been uprooted from their homes and forced to trek for days in search of food, water and medical treatment.

Hundreds of malnourished and disease-hit children have already died and more than 300,000 people face starvation.

If people are dying, then why has famine not been declared?

The decision to declare a famine is generally made jointly by the government and the United Nations.

A famine declaration can be politically contentious as governments may see it as a blight on their rule and an opportunity for opponents to point to a failure of governance and inability to provide basic protection.

Aid workers in Somalia said part of the newly elected government of President Hassan Sheikh Mohamud was hesitant to declare famine as it would damage public support and play into the hands of al Shabaab insurgents.

The government also fears a famine declaration could dissuade investors and divert foreign aid aimed for long-term development projects to the famine response.

In September, Mohamud admitted that the prospect of famine in parts of Somalia was serious.

“Declaring famine itself is a very difficult situation that does not affect famine victims only, but halts development and changes perspectives,” Mohamud said at an event at the Center for Strategic and International Studies, a Washington-based think-tank.

Will a famine declaration enforce action?

No. The declaration of famine carries no binding obligations on the United Nations, the government or other U.N. member states, but serves to focus global attention on the situation and galvanise resources to provide emergency aid. When another drought crippled Somalia in 2017, rapid action helped avert a famine.

What are the projections for Somalia for the coming months?

Forecasts are bleak, indicating there will be poor rainfall during the current rainy season and this is likely to extend to the next rainy season in March-May, according to the Famine Early Warning Systems Network (FEWS NET).

“Regardless of next year’s rainfall performance, recovery from a drought of this magnitude will take years, with extremely high humanitarian needs set to persist and even increase in 2023,” said a statement from FEWS NET.

“Many people have completely lost their livelihoods and coping capacities and are relying heavily on assistance to meet basic needs,” it added.

Africa to receive its 1st vaccines for mpox, formerly known as monkeypox

A Safe and Secure Approach to Handling Medicines

The Secret to Restoring Youthful Glam

WHO officially renames monkeypox under pressure from Biden administration