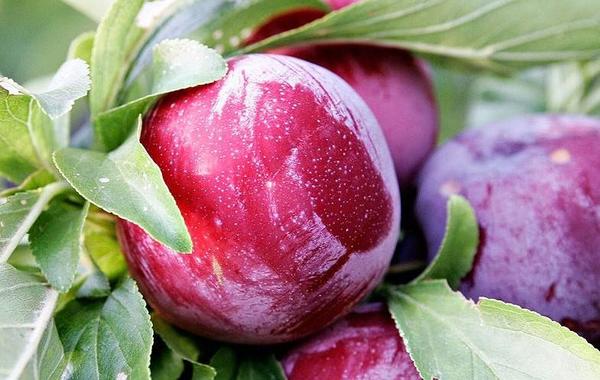 Plum is one of the fruits belonging to the family of apricots, nectarines and peaches. This fruit has great and varied health benefits; Because it is rich in dietary fiber, it is often used as a recipe for treating constipation, whether in its fresh or dried form. It also improves the health of the heart and arteries, and regulates the level of sugar in the blood. But scientists have found an amazing new benefit for plums, so what is it?

New research revealed a wonderful benefit of the fruit of the plum or peach; Where scientists have proven its unique ability to significantly reduce calories, and reduce appetite; This has been proven in long-term trials to support weight loss.
Researchers from the University of Liverpool in England conducted a two-stage study; In the first phase, researchers compared satiety, appetite and calories in participants who ate a snack of either prunes, raisins, or candy, all of which contained similar proportions of calories.
In the second phase of the study, published in the scientific journal “Nutrition Bulletin”, the researchers focused specifically on the topic of “weight loss”; The participants were divided into two groups, the first group included those who followed a 12-week weight loss program with prunes or prunes as a snack, and the second group included those who followed the same program, but were only provided with instructions on healthy snacks.
The researchers found, according to the study, that those who ate prunes consumed subsequent meals that included fewer calories in general, in addition to decreasing their levels of hunger, giving them longer periods of satiety, and eating less food.

Follow more: You won’t believe what will happen to your body when you drink green tea daily

How does plum support weight loss?

The results indicated that eating prunes can help control appetite and reduce overall calorie intake, and are an ideal snack; To maintain body harmony and avoid obesity.
Although no statistically significant differences were observed between groups in terms of weight loss, the group that relied on peaches in the diet experienced a significant weight loss compared to the other groups.
Those who ate prunes regularly during the study reported greater levels of satisfaction and greater ease in following a weight loss program due to appetite control.

Prunes of all kinds have many potential benefits, including, according to the “Web Medicine” website:

Improving the health of the heart and arteries: Eating plum fruits regularly contributes to improving the health of the circulatory system in general and reducing the chances of developing cardiovascular diseases, and the reason for this is often because these fruits contain a variety of nutrients and chemical compounds that may help fight various infections in the circulatory system. Regulating blood pressure levels, lowering bad cholesterol levels, and raising good cholesterol levels.
Regulating blood sugar levels: One study showed that eating plums may help reduce the chances of developing type 2 diabetes, especially since this type of fruit has a low glycemic index. Therefore, taking it does not cause any sudden rise in blood sugar.
Improve digestion: Prunes of all kinds, especially the dark Damson plum, contain a relatively high amount of dietary fiber; Therefore, eating plum fruits regularly may help to combat some digestive disorders, relieving symptoms associated with some diseases of the digestive system, such as: stomach ulcers.
– Strengthening immunity: Some types of plums contain a relatively high amount of vitamin C, which is one of the important vitamins that helps strengthen the immune system by combating disease-causing free radicals, promoting the production of white blood cells, and stimulating the production of new cells in the body, especially in areas of wounds. To speed healing and recovery.
Fighting cancer: Prunes contain the compound epicatechin, which one study showed may help inhibit the growth of cancer cells and prevent their spread.
Improving the health of the nervous system: Plums contain vitamin B6 and B6, and a group of nutrients that may help improve the functioning of nerve cells in the body.
Strengthen bones and reduce the chances of osteoporosis.
Improve sleep quality and fight insomnia.

Note from “Madam Net”: Before applying this recipe or this treatment, consult a specialist doctor.

Follow more: The most important abdominal exercises for women for a tight abdomen