How did the stars coordinate the green color in their looks? 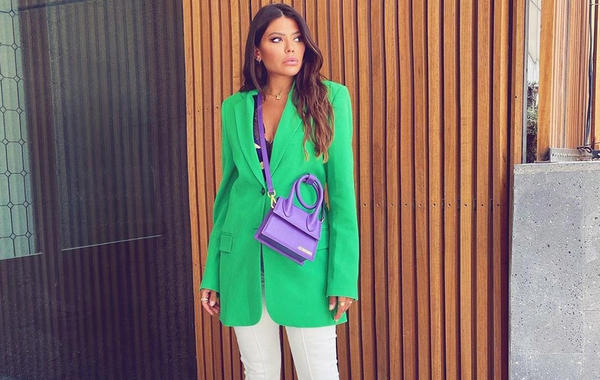 The green color was very popular and was popular, whether in street style looks in which the stars were distinguished, or on important occasions on the red carpet, but the audacity lies in its combination with strong colors such as violet or fuchsia or even with varying degrees of green.

What is the most popular shade of green?

All shades of green are in circulation today, but grassy green is the most popular, followed by neon phosphorous and mint green, which was worn by the star Ahlam. This vibrant color is no longer associated with a specific season, as neon is popular for winter 2022 and will complete its brilliance in spring 2022. Fashion standards have mixed and there are no longer degrees associated with a specific season, such as pink, which we used to see often in the spring season and not during the winter and cold, and the star Haifa Wehbe recently wore it with green glasses; Sometimes all we need is a touch of green to freshen up the look, as influencer Natalie Feng does when she chooses green mini bags with a fuchsia suit or with a white look.

In her green clothes, Cyrine Abdel Nour adopted a safe strategy in terms of choosing the monochrome character. The long, metallic green dress does not need many accessories because it is bright enough, and the jumpsuit that she recently chose and posted on Instagram is of green crepe and decorated with a golden belt. The star adopted simplicity in coordinating the look, so it came Beautiful, but it did not bring anything new in the ways of coordinating the color.
Follow more: Elegant winter looks inspired by Al Anoud Badr

Lady Fouzaz charmed us with her look, which consisted of a green jacket and a purple printed blouse carefully coordinated with wide and high-waisted white pants, showing us the attractiveness of the contrasts adopted by the star. She deserves the title of fashionista because she dares to try new things. The easiest thing is to adhere to safe rules and not to multicolor, but the audacity lies in the challenge of mixing color contrasts and mastery of coordination. The look has added beauty to the purple Jacquemus bag that she carried.
Follow more: Get inspired by Haifa Wehbe with your bold dresses

The influencer is considered one of the most daring beauties in adopting distinctive accessories such as the emoji rings that always adorn her toes, and jeweled shoes and boots. From her Instagram, we chose the phosphorous green jacket, which she coordinated with a white shirt and faded denim pants, and she wore white sneakers. She is rightly regarded as the pioneer of modern street style looks that emulate foreign influences such as Leonie Han and Chiara Ferrani.

The star Haifa Wehbe recently adopted two ways to coordinate the green, so she chose a long dress in green, but lined with silk satin fabric in fuchsia, which appears whenever she takes a step forward, and is one of the most attractive looks she has adopted. As for the second look, she chose a fuchsia outfit of short embroidered tulle, and put on dark cat glasses with a bright green frame, and she outperformed the first style.

Note: Pictures are from the Instagram accounts of the stars