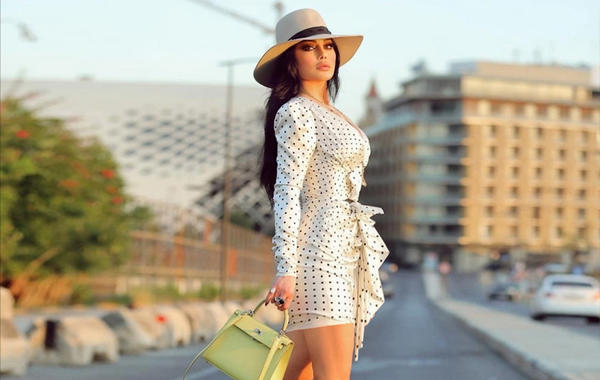 No one disagrees with Haifa Wehbe’s boldness in choosing her outfits. They sparkle with designs that many fail to choose because of their boldness and strangeness. In a tour of the most prominent looks that Haifa Wehbe shared with her followers on her Instagram account, we were drawn to the bold dresses she recently wore.

Haifa Wehbe in a sequin dress

During her performance of a wedding party in Cairo, Haifa Wehbe sparkled in a sequin dress in pink and blue. The dress, signed by the designer Mikhail Chamoun, is distinguished by a cut of shoulders and is decorated with a long slit at the side of the leg. Haifa decorated it with jewelry made of white gold and diamonds, and wore Mol shoes studded with strass.
Follow more: 7 summer looks for the star Haifa Wehbe

Haifa Wehbe in a black dress

On one of her special occasions, Haifa chose an off-the-shoulder dress in black with a long slit decorated with a piece of lace. Haifa added a lively look to her look with pink accessories consisting of a Prada fur bag and Gianvito Rossi sandals with feathers.

Haifa in a short pink dress

In this bold look, Haifa Wehbe chose a short pink dress signed by designer Antoine Kareh, decorated at the shoulder and one side with ruffles in the form of a large flower. With the dress, Haifa chose a Chanel clutch bag and green cat-eye sunglasses to add to her freshness and liveliness.
Follow more: Haifa Wehbe’s latest looks show her remarkably boldness

Haifa Wehbe in a printed dress

And from the polka dot trend, Haifa chose this short satin dress signed by Alexandre Vauthier, she wore black leather sandals from Proenza Schouler and carried a light green bag from Hermès. She wanted to give her look a special touch by wearing a beige and black fedora hat.
Follow more: Zainab Fayyad, Haifa Wehbe’s daughter, competes with her mother with boldness and elegance