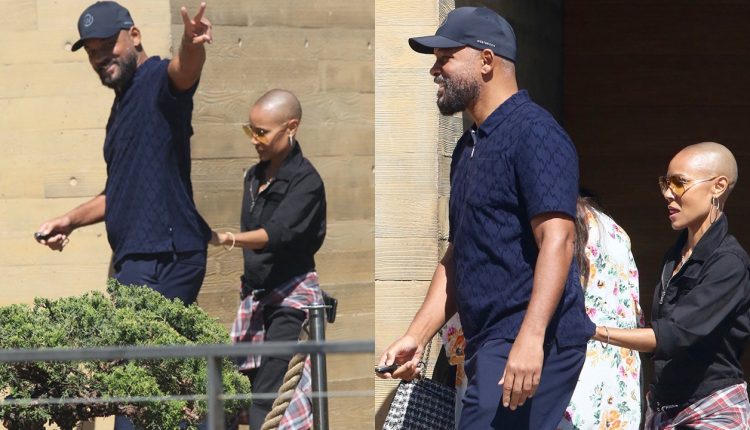 Will Smith and Jada Pinkett Smith enjoyed an afternoon together in Malibu on Saturday, in their first sighting since millions of viewers watched him slap Chris Rock during the live Oscars telecast in March.

Smith, 53, sported a navy blue ensemble with a matching hat for lunch at the trendy Nobu sushi spot on the Pacific Coast Highway with his wife of nearly 25 years.

Jada rocked a black jumpsuit with a red plaid flannel jacket wrapped around her waist as she followed closely behind her husband while leaving the ocean-side restaurant.

The couple have largely stayed out of the spotlight since Smith famously hit Rock across the face before the comedian presented an award during the live telecast of the 94th Academy Awards. Seconds before, Rock told a joke about Jada.

CHRIS ROCK HAS ‘NO PLANS TO REACH OUT’ TO WILL SMITH FOLLOWING HIS PUBLIC APOLOGY FOR OSCARS SLAP, SOURCE SAYS

Will Smith and Jada Pinkett Smith stepped out for the first time in months after he slapped Chris Rock at the Oscars.
(Mega Agency)

Smith stormed the stage after Rock joked about Jada’s bald head in a reference to “G.I. Jane.” Pinkett Smith had previously discussed her struggles with alopecia, an autoimmune disorder that causes hair loss.

Following the incident, Smith received the best actor award for his work in “King Richard,” at which time he apologized for his actions.

Days later, the “Independence Day” star announced his resignation from the Academy in a statement provided to Fox News Digital, saying he had “betrayed the trust of the Academy.”

“I have directly responded to the academy’s disciplinary hearing notice, and I will fully accept any and all consequences for my conduct,” he said.

“My actions at the 94th Academy Awards presentation were shocking, painful and inexcusable. The list of those I have hurt is long and includes Chris, his family, many of my dear friends and loved ones, all those in attendance and global audiences at home. I betrayed the trust of the academy.”

Will Smith wore a navy blue outfit while Jada Pinkett Smith opted for a black jumpsuit for lunch at Nobu Malibu.
(Mega Agency)

Will Smith and Jada Pinkett Smith have kept a relatively low profile since the Oscars incident in March.
(Mega Agency)

Smith added that he “deprived other nominees and winners” of their chance to be celebrated and said he will accept any further consequences from the board.

“I am heartbroken,” he said. “I want to put the focus back on those who deserve attention for their achievements and allow the academy to get back to the incredible work it does to support creativity and artistry in film. So, I am resigning from membership in the Academy of Motion Picture Arts and Sciences, and will accept any further consequences the Board deems appropriate.”

Following his resignation, which was accepted by the Academy, Smith was banned for 10 years from attending Oscars events and shows.

In July, Smith filmed a YouTube video delving more into the event, where he revealed he has reached out to Rock to talk about the incident, but claimed the comedian is not ready to sit down with him. He also spent the five-minute-long video apologizing to Rock and others — including Rose Rock.

Will Smith, right, hits presenter Chris Rock on stage while presenting the award for best documentary feature at the Oscars on Sunday, March 27, 2022, at the Dolby Theatre in Los Angeles.
(Chris Pizzello)

Rock’s mother, Rose, initially said, “When Will slapped Chris, he slapped all of us, but he really slapped me.”

For his part, Chris has used the slap has a talking point on his most recent “Ego Death World Tour,” and compared Smith to the former Death Row Records co-founder, Marion “Suge” Knight, who is currently serving a 28-year prison sentence after pleading no contest to voluntary manslaughter in 2018 following a fatal confrontation in Los Angeles in 2015.

“Everybody is trying to be a f—ing victim,” Rock said, via People magazine. “If everybody claims to be a victim, then nobody will hear the real victims. Even me getting smacked by Suge Smith … I went to work the next day, I got kids.”

“Anyone who says words hurt, has never been punched in the face,” he added, words he’s echoed in a previous show while touring recently with Kevin Hart on “Only Headliners Allowed,” a show where Dave Chappelle also appeared.