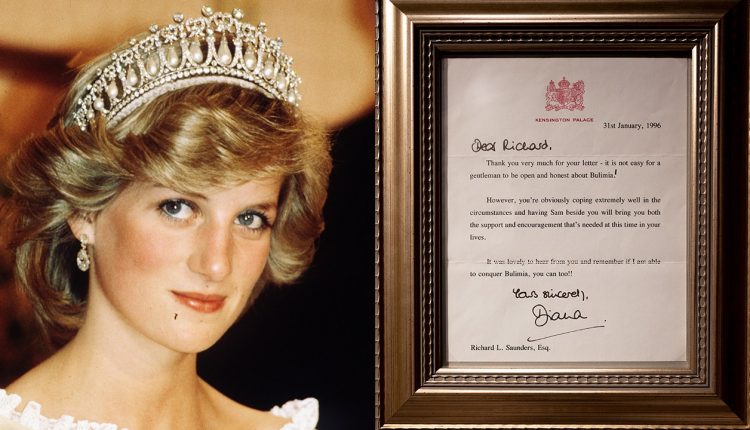 Princess Diana wasn’t shy about sharing her struggles in hopes it would help others.

In her lifetime, the Princess of Wales was known for the heartfelt letters and cards she wrote behind palace doors. One of them, which touched on her battle with bulimia, is now on display in Las Vegas.

Royal fans unable to travel across the pond can now head to Sin City for a special exhibition dedicated to “The People’s Princess.” Coinciding with the 25th anniversary of her passing, a new attraction titled, “Princess Diana: A Tribute Exhibition,” now occupies a 10,000-square-foot space. It features more than 700 items of memorabilia. The items, many of which have not been seen before by the public, include evening gowns, personal letters Diana wrote, as well as gifts she gave to friends.

“[This] is the only letter that we know on record where she publicly speaks about having bulimia and writing to someone else about the struggle she had [with it],” David Corelli, curator of the exhibition, told Fox News Digital. “This was the late ‘80s, early ‘90s. Nobody was speaking about mental health. And for her to come out publicly and start to bring up some of those issues, you start seeing a wave of people … getting actual treatment and seek help.”

Princess Diana passed away in 1997 from injuries she sustained in a Paris car crash.
(Andy Stenning/Mirrorpix/Getty Images)

“Dear Richard — Thank you very much for your letter — it is not easy for a gentleman to be open and honest about Bulimia!” she wrote. “However, you’re obviously coping extremely well in the circumstances and having Sam beside you will bring you both the support and encouragement that’s needed at this time in your lives. It was lovely to hear from you and remember if I am able to conquer Bulimia, you can too!!”

Corelli said he wasn’t surprised that the princess was so candid in her note.

“That was Diana’s trademark, right?” he said. “She took that extra step. There was a line that was considered acceptable for a royal. And she said, ‘I don’t play by those rules. I set my own rules of what I feel is right and fair in the world.’ So, the fact that she would step over those lines doesn’t surprise me. When you look back at her life and legacy, she went beyond what was considered acceptable for a royal to do.

Princess Diana visits a patient at the London Lighthouse, a center for people affected by HIV and AIDS, in London, October 1996.
(Jayne Fincher/Getty Images)

“Being open about bulimia, even dispelling the myths around AIDS, a cause she supported, was considered taboo,” he continued. “But she wanted to show people that if we could also just show a little bit of compassion, the world would be a better place. I think that’s her legacy and message for the world — take that extra step to show compassion.”

It wasn’t obvious Diana would be a royal rebel when she married the future King Charles in 1981. A member of the aristocratic Spencer family, Diana was known for her quiet nature. After spending time at a finishing school in the Swiss Alps, she worked as a nanny and a preschool teacher while living in London. Reporters and photographers quickly followed her wherever she went. While she hated the intrusion, Diana caught on that the media was also a tool that she could use to bring attention to her causes and change public perceptions.

Princess Diana was interviewed by Martin Bashir for the “Panorama” TV series in 1995. During the televised sit-down, the royal got candid about her struggles.
(Pool photograph)

“I didn’t like myself, I was ashamed because I couldn’t cope with the pressures,” she said. “I had bulimia for a number of years, and that’s like a secret disease… It’s a repetitive pattern, which is very destructive to yourself.”

“It was a symptom of what was going on in my marriage,” Diana continued. “I was crying out for help but giving the wrong signals, and people were using my bulimia as a coat on a hanger: they decided that was the problem — Diana was unstable.”

In 2017, Diana’s eldest son, Prince William, appeared in a documentary for British broadcaster Channel 4 titled, “Wasting Away: The Truth About Anorexia.” In it, the prince said he was “absolutely” proud that his mother spoke out about her struggles in hopes it would encourage others to seek treatment.

But there was another side to Diana that pals witnessed. Corelli said the princess was known for her sense of humor — one she was proud to showcase in her letters.

“As we’re going through the vast collection, the stories started to arise,” said Corelli. “One that I love is Diana’s humor. Everybody knows that Diana loved to laugh. It’s what [Prince] Harry says he remembers the most that she had this infectious, childlike laughter that he could remember clearly in his head. We have this whole area where it’s all funny cards for Christmases, birthdays and anniversaries that she had given to her friends and family. She really indulged in her quirky sense of humor.”

“She would go to regular department stores and pharmacies and just find typical greeting cards that you could pull off the shelf,” he said. “One has her face on it … another had the queen’s face on it… She had all of these funny messages for those closest to her. When you see the messages that she wrote to these people and the cards she used, there’s a layer of her personality that you can never experience in a documentary. That’s what makes it unique to be there in person, to be able to see these things up close and personal.”

Princess Diana gave a locket to Sarah-Jane Gaselee. The bridesmaid wore it for decades.
(Princess Diana: A Tribute Exhibition)

And there are plenty of stories that have been seemingly forgotten with time, ones that audiences can learn about at the exhibition. Corelli said Diana’s friendship with bridesmaid Sarah-Jane Gaselee comes to mind.

“Sarah-Jane was the daughter of Charles’ horse trainer and polo manager,” Corelli said. “As Charles was spending a lot of time on the polo field, Diana started to build a little sister/big sister relationship with Sarah-Jane and asked her to be a bridesmaid. As a special gift to Sarah-Jane for being a bridesmaid, she gave her a heart locket. Sarah-Jane cut out the ‘love, Diana’ signature from the thank you letter. She folded it up, put it inside that locket and [wore it] for 16 years. We were able to acquire it directly from Sarah-Jane recently.”

Corelli said the exhibition is created in partnership with Pink Ribbons Crusade. The 501(c)(3) all-volunteer charity shared its multimillion dollar collection of Diana artifacts and royal family memorabilia to raise funds to fight breast cancer. Many of the items, he said, have come from royal brokers, as well as friends and former employees of the royal family.

He noted that the fascination surrounding Diana’s brief life continues to grow, especially in the U.S. The princess passed away in 1997 from injuries she sustained in a Paris car crash. She was 36.

“Diana was an icon for several reasons,” Corelli said. “Whether it was her love of family, her genuine care of others, her humanitarian efforts, the way her style is still emulated today … there were so many ways that she impacted the world.”

“I think people gravitate to that message that she left behind: the world can and will be a better place if someone’s out there to do the work. She was real. She lived that day to day.”