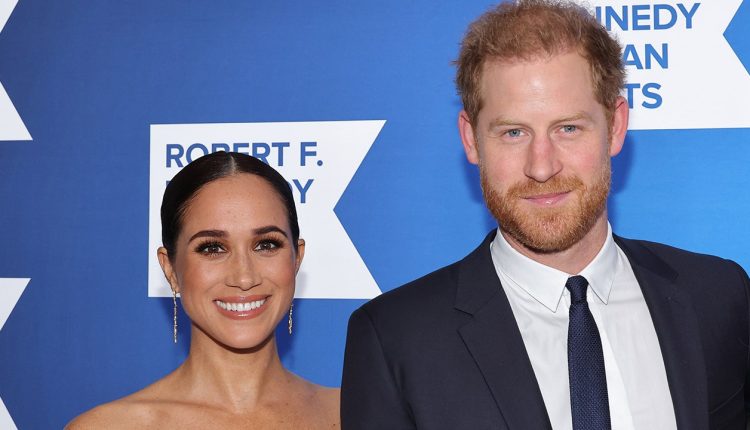 Prince Harry and Meghan Markle jumped straight into sharing intimate details of the early stages of their relationship in the new Netflix docuseries, “Harry & Meghan.”

The opening scene began with a note stating that members of the royal family “declined to comment” on the contents seen in the series. Netflix also noted that all interviews with Meghan and Harry concluded by August, before the death of Queen Elizabeth.

The debut episode featured Harry in the Heathrow Airport on the day of the infamous “Megxit,” when the couple stepped away from their senior royal duties in 2020.

“I don’t even know where to begin,” Markle is filming herself, in California, on the verge of tears.

Prince Harry and Meghan Markle shared intimate details of the early stages of their relationship in the first episode of “Harry &amp; Meghan.”
(Mike Coppola)

The prince revealed in the first episode that he met Markle through Instagram during the summer of 2016. They were “secretly” dating since July 2016, but did not go public with their relationship until that October.

Many of the couple’s friends, including Harry’s polo pal Ignacio “Nacho” Iglesias made appearances in the first episode, vouching for how “in love” Markle and Harry were from their first encounter.

The first episode of the docuseries touched on Harry’s relationship with his mother, the late Princess Diana, and how he remembers his childhood being “swarmed with paparazzi.”

Harry shared that Diana was “deceived” into giving the well-known Panorama interview where she shared her experience as being a member of the royal family. Harry said that his mother was “harassed” while being married to the now King of England – King Charles – but it only got worse once they separated.

“Don’t react. Don’t feed into it,” Harry said was the advice he was given as a child about how to handle the paparazzi.

The Duke of Sussex mentioned that the treatment his late mother received was similar to what his wife was facing with the media.

Harry addressed that he was aware that there are many people who do not agree with how he stepped away from royal responsibilities in 2020, but emphasized that he was “trying to protect” his family.

At the end of the first episode, Harry shared that he “naively” walked into his public relationship with Markle in October 2016.

Leading up to release of the highly anticipated docuseries, the couple faced backlash after including a clip where Harry and Markle claimed they were being hounded by paparazzi turned out to be an old snap from the London premiere of “Harry Potter” – which was taken years before the couple met.

Prince Harry alludes to similarities in the treatment of his wife Meghan Markle and late mother Princess Diana.
(Bettmann/Karwai Tang)

The Sun reported that the photographers were really pointing their cameras at the all-star cast of “Harry Potter and the Deathly Hallows: Part Two” in Trafalgar Square, London. The event took place in 2011, which is five years before the prince and the former American actress met in 2016.

The couple famously stepped away from their duties as senior royals in 2020, moving to California to raise their son, Archie, and daughter Lilibet.

The first three episodes of the series released on Thursday with Volume II debuting on Dec. 15.