Mel B says James Corden is the ‘biggest d—head’ in Hollywood she’s ever met: ‘He hasn’t been very nice’ 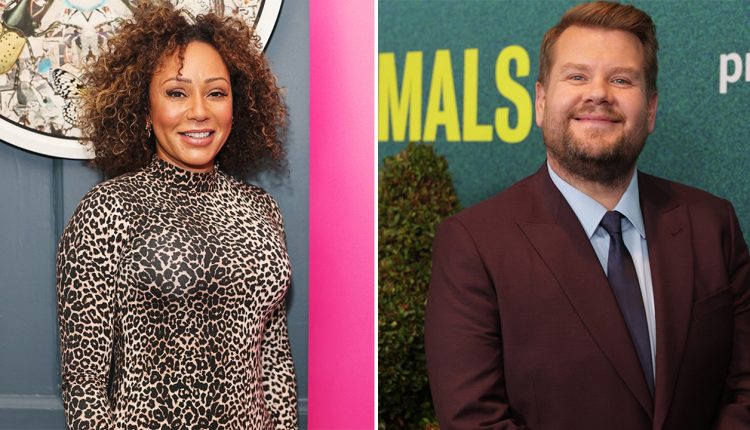 Mel B did not have pleasant things to say about James Corden.

On Friday, Melanie Brown was a guest on “The Big Narstie Show” where she was asked, “Who is the biggest d—head celebrity you’ve met?”  The former “Spice Girl” put her own name on the list, as well as fellow Spice Girl Ginger Spice.

“So, there’s a few,” Mel said on the British talk show. “James Corden, Geri Halliwell, Jessie J and me.”

Mel clarified that she loved Halliwell, but she can be “really f—ing annoying.”

Mel B said she loves her former bandmate, Geri Halliwell, but she can be “annoying.” The pair were photographed here in 2013.
(Will/GC Images)

However, Mel’s feelings on Corden seemed to stem from how he treats other people.

“I think you always have to be nice to the people that you work with — whether it be production, camera guys, sound, lighting,” she said.

“We all work for the same thing, so you should always be nice, and he hasn’t been very nice.”

A rep for Corden did not immediately respond to Fox News Digital’s request for comment.

Mel was a guest on Corden’s the “Late Late Show” in 2016 and again in 2018. The former pop star joins restaurateur Keith McNally in the recent condemnation of Corden.

In October, McNally took to Instagram and initially banned the comedian from dining at his New York City upscale eatery, Balthazar, after Corden was allegedly “abusive” to his employees.

“James Corden is a Hugely gifted comedian, but a tiny Cretin of a man. And the most abusive customer to my Balthazar servers since the restaurant opened 25 years ago,” McNally wrote on Instagram at the time.

The restaurateur said in one ugly incident, Corden allegedly “yell[ed] like crazy” at a server because his wife’s egg yolk omelet had egg white in it, and when it was brought back to the table after being fixed, it was paired with home fries instead of a salad.

McNally said Corden apologized “profusely” after the post got media attention, which prompted him to reverse the ban. But things took a turn when Corden claimed he did nothing wrong “on any level” to The New York Times shortly after.

“Should we not all be a little grown up about this?” Corden asked the reporter. “I promise you, ask around this restaurant. They don’t know about this. Maybe 15% of people.” McNally called for Corden to “own up” to his behavior in another Instagram post.

After the heated Instagram post, Corden issued a public apology to McNally and the Balthazar staff and called his behavior “ungracious.”

“Because I didn’t shout or scream — like I didn’t get up out of my seat, I didn’t call anyone names or use derogatory language — I have been walking around thinking that I hadn’t done anything wrong, right?” Corden said on an appearance of the “Late Late Show” in October.

“As her meal came wrong to the table the third time, in the heat of the moment, I made a sarcastic, rude comment about cooking it myself. And it is a comment I deeply regret,” the “Cats” actor said.

“I understand the difficulties of being a server. I worked shifts at restaurants for years,” Corden added. “I have such respect and I value anyone that does such a job, and the team of that restaurant are so great.

“I hope I’m allowed in again one day, so when I’m back in New York, I can go there and apologize in person, which is something I will absolutely do.”

As for Mel’s response to Jessie J, she did not share any additional details, but the Spice Girl previously named Jessie J after being asked who the most “overrated” pop singer is during a 2019 interview. Jessie J later called Mel “overrated” in an Instagram.

“‘Overrated’ *Mel B Voice,” she wrote at the time, according to Entertainment Tonight.

A rep for Jessie J did not immediately respond to Fox News Digital’s request for comment.