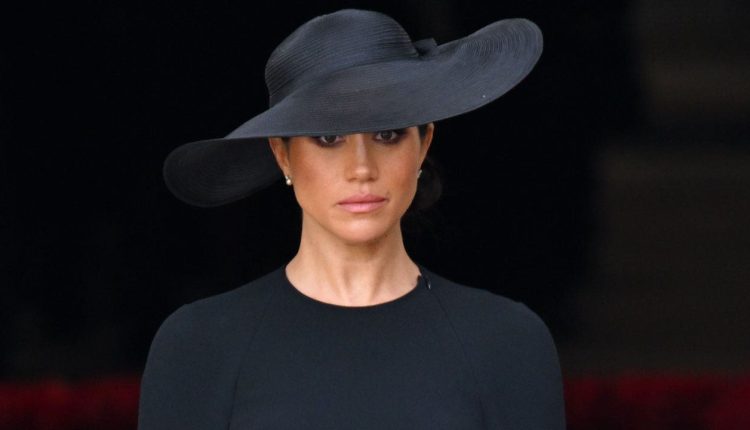 LONDON, England – Prince Harry faces a life of permanent “exile” with King Charles III plotting to follow the playbook drawn up by the royals when they overcame the crisis triggered by Edward VIII, the king who abdicated in 1936 and was obliged to live the rest of his life outside the U.K.

That’s what the headlines in the gossip columns say about the recent return of Harry and Meghan to the U.K., but the truth is much different.

The Royal family evolves and divides after each reign with no one safe from exclusion. You need only look at the way ex-royal servants are dispensed with after service is done. Harry and Meghan are no different.

Meghan, Duchess of Sussex, during the state funeral for Queen Elizabeth II at Westminster Abbey Sept. 19, 2022, in London.
(Karwai Tang/WireImage via Getty Images)

She’s a former actress who listed herself as a “supermodel” on her resume prior to landing the biggest role of her career, after she fell in love with a prince from the most famous royal family in the world. He’s a prince by birth with no career direction but ready and happy to trade on his good looks and having no responsibility in life. They were a match made in heaven.

But not even Markle, with all of her showbiz bang, could have foreseen just how quickly the ax will swing with the arrival of the new reign of King Charles III.

Markle has told associates that the king “liked me a lot, and we get on well,” until, of course, she trashed him on TV and kept pushing ahead with daily tidbits about his institution and families.

But it’s not King Charles that Meghan and Harry should be worried about. It’s the new Prince of Wales, who reportedly called out the ex-actress directly to his younger brother ahead of the wedding that Markle called a “spectacle.” Meghan tried her very best to make William like her while gushing about saving the planet. He was having none of it.

She tried then the wife, but Catherine, while easier going than William, was well versed in diva antics of the showbiz world, thanks to her savvy mother Carole.

What frustrated Meghan most was that she could not make William like her, according to my good source. She relayed this back to Harry, who remained perplexed at this situation. After all, “everyone loves Meghan, right?”

Not quite, Harry, as his friends were exiled on a frequent basis because they did not agree with the madcap woke world of the new Duke and Duchess of Sussex. Harry was happy for this to happen. But the one thing Meghan could not do was bin William. She saw him as the future of the monarchy and her ticket to a new starring role.

Now, in 2022, Meghan believes Charles will and still does like her. And she holds the key to one thing Charles would like to return to order: his younger son Harry.

“Charles simply cannot fathom just how he has ended up like this with Harry when they were once so close, and now Meghan holds the key to that,” a source told me.

“She knows he will need her if she is to allow Harry back to any kind of relationship with his father, and Charles is very aware of this. Let’s face it: she booted her own father as he did not fit the remit when she elevated herself to her latest role, so Charles won’t get a look in.”

But William, for Meghan, is the bigger problem and one she can’t solve.

“William cannot abide Meghan despite what you saw at the recent Windsor walkabout,” a source told me. “He is playing the very long game. And, make no mistake, she is terrified of him simply because, throughout all of this, William has not once shown any incline to her charms.”

This is annoying Meghan beyond belief.

So, for those claiming it will be the new King Charles who is ready to wield his proverbial ax on the ex-royal couple, think again. Charles should be watched by the couple. But, for the man who one day will be king, there will be no room for a former actress and a party-loving prince in his court even if it’s his once much-loved younger brother.

How could this change in the future?

“Harry alone will always be welcome, but no one — and I mean, no one — trusts the deluded head, thoughts and mind of Markle. It’s as simple as that,” the source confided.