Meghan Markle, Prince Harry take New York: What to know about their visit 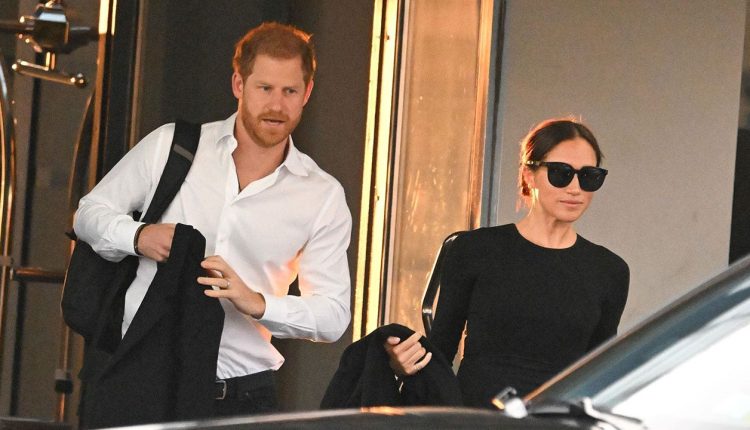 Prince Harry and Meghan Markle landed in New York City on Monday afternoon, ahead of a scheduled appearance at the Ripple of Hope Awards Gala Tuesday evening.

The couple flew to the Big Apple from California on a private jet. Photos of the Duke and Duchess of Sussex show their arrival at the John F. Kennedy International Airport.

The prince was dressed in a white button down shirt, while Markle kept it simple in a black dress accessorized with black sunglasses.

Prince Harry and Markle are being awarded with the Ripple of Hope Award.

PIC OF MEGHAN MARKLE, PRINCE HARRY BEING HOUNDED BY PAPARAZZI IN NETFLIX DOC IS FROM ‘HARRY POTTER’ PREMIERE

The couple will be honored Tuesday night at the Ripple of Hope Award Gala.
(Credit: Backgrid)

What is the Ripple of Hope Award?

The Ripple of Hope Award has been given out by the Robert F. Kennedy Human Rights organization for almost 50 years. The award is given to honor leaders in “government, business, advocacy, and entertainment” who have committed to “social change,” according to the organization’s website.

“At the helm of major corporations, this year’s laureates have prioritized equity, inclusivity, and sustainability in the workplace and the world.”

Why are Meghan Markle and Prince Harry being honored?

The Duke and Duchess of Sussex are also set to release their highly-anticipated Netflix documentary “Harry &amp; Meghan” later this week.
(Credit: Backgrid)

Harry and Markle were picked to receive the award from the Robert F. Kennedy foundation in “recognition of their work on racial justice, mental health, and other social impact initiatives through their Archewell Foundation,” a press release from the human rights organization said.

“When The Duke and Duchess accepted our award laureate invitation back in March, we were thrilled. The couple has always stood out for their willingness to speak up and change the narrative on racial justice and mental health around the world,” Kerry Kennedy, president of Robert F. Kennedy Human Rights and Robert F. Kennedy’s daughter, said in a statement.

She continued, “They embody the type of moral courage that my father once called the ‘one essential, vital quality for those who seek to change a world that yields most painfully to change.'”

Who will be there?

Alec Baldwin will also be in attendance and will serve as the emcee for the event.

Are Meghan Markle and Prince Harry taking attention away from the working royals?

Throughout the past two weeks, Prince Harry and Markle have seemingly competed with Prince William and Kate Middleton for attention in the media. On Thursday, Netflix released the first trailer for its upcoming six-part documentary on the Duke and Duchess of Sussex titled “Harry & Meghan.” It promises to shed light on the difficulties the couple endured in the royal spotlight.

“No one sees what’s happening behind closed doors,” Harry says during the trailer. “I had to do everything I could to protect my family.”

“When the stakes are this high, doesn’t it make more sense to hear our story from us?” Markle asked.

For some, it seemed like Prince Harry and Markle worked to “overshadow” the Duke and Duchess of Wales.

“There’s no denying that the trailer has been properly dropped at this time to potentially overshadow William and Kate’s visit to America and kind of switch the focus to the Sussexes,” Kerene Barefield told Fox News Digital. Barefield is an executive producer for True Royalty TV, which recently launched a documentary titled “Prince William: Duty Calls,” exploring how the father of three, who is first in line to the throne, is preparing to become king.

Catherine, Princess of Wales and Prince William, Prince of Wales are seen in a new behind-the-scenes photo from The Earthshot Prize 2022 at MGM Music Hall at Fenway in Boston.
(Photo by Chris Jackson/Getty Images for Earthshot)

“It definitely makes you want to watch the Netflix series,” she shared. “It shows you the highs and lows, the personal pictures – it says everything within a minute… But for me, I find that it’s quite a sad thing to release it now while Kate and William are out there doing very important work in terms of raising awareness to save our planet.”

Tom Verlaine, guitarist and co-founder of band Television, dead at 73

Turkey warns its citizens of possible…