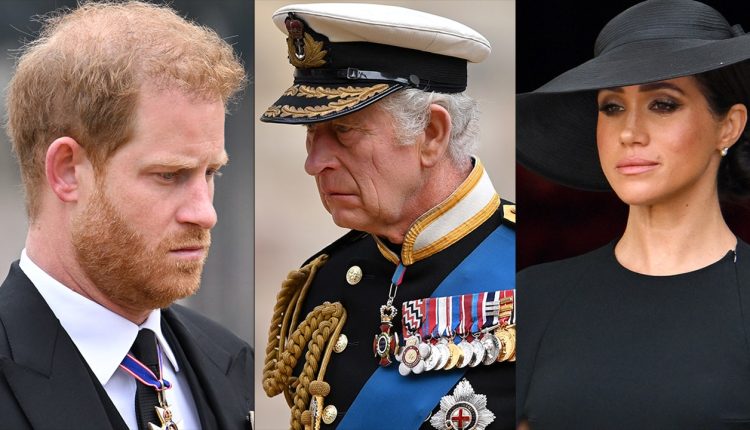 King Charles is hopeful that with time, he can make peace with his youngest son and daughter-in-law.

Palace sources recently told The Telegraph that the monarch saw “tremendous flickers of hope” in his recent interactions with the Duke and Duchess of Sussex amid Queen Elizabeth’s death.

“I don’t think anyone would deny that publicly Prince Harry and Meghan Markle behaved themselves during the loss of Queen Elizabeth II,” Kinsey Schofield, royal expert and host of the “To Di For” podcast, told Fox News Digital.

“We have heard whispers of title negotiations for the children and invitations revoked,” she shared. “There were some undeniably uncomfortable moments during Harry and Meghan’s time in the U.K. However, King Charles is an optimist and appreciated their toned-down presence throughout the process. The king is eager for a truce but unfortunately, there are too many things in the pipeline that could jeopardize the Sussexes’ relationship with the new monarch.”

Royal sources alleged that King Charles is optimistic that tensions with the Duke and Duchess of Sussex will ease.
(Getty Images)

The queen passed away on Sept. 8 at Balmoral Castle in Scotland. She was 96. The Sussexes, who were in the U.K. to support some of their charities, participated in events to mourn the late royal and attended her state funeral.

Despite strained relations within the family, a royal insider stressed to the outlet that the king “loves both of his children,” referring to Harry and his older brother Prince William.

“Over the last 16 days or so, there were tremendous flickers of hope. In terms of the future, there is hope of a cause for unity,” the source claimed.

Prince Harry and Prince William in uniform at a vigil for Queen Elizabeth II.
(Aaron Chown/Pool/AFP via Getty Images)

Harry, who traveled alone to Balmoral “several hours behind other senior royals,” was allegedly not told of his grandmother’s death before the public announcement was published online. The 38-year-old was allegedly “forced instead to find out from news reports.”

A spokesperson for Charles, 73, told Fox News Digital that all members of the royal family were informed before a public announcement was made. Sources alleged to the outlet that Harry was contacted “minutes” before the statement was released by the king shortly before the Duke of Sussex’s plane landed in Aberdeen.

When Charles referenced the Duke and Duchess of Sussex in his first speech as king, some were adamant that it was his way of extending an olive branch. However, “others suggested it was little more than a PR move,” the outlet revealed. The couple faced more drama involving Harry’s right to wear his military uniform, as well as an invitation “sent in error” to a state reception at Buckingham Palace.

While the Sussexes are now back in California, Schofield said there is still worry within the palace concerning their next move.

“Prince Harry’s book is of grave concern to the palace,” she explained. “What is the Netflix documentary about? Will the parade of upcoming comedians on Meghan Markle’s podcast take any swipes at the royal family? Will Meghan continue to choose to work with media outlets that have been so vulgar and critical of the royal family? These are the questions that palace staff bounces off one another when they debate a future that includes Prince Harry and Meghan.”

BUCKINGHAM PALACE WILL ‘DEVISE A PLAN’ TO PROTECT KING CHARLES AGAINST ‘THE CROWN,’ ROYAL EXPERT SAYS

“The royal family is in a very fragile state right now and King Charles likely fears having people out there working against him,” she continued. “But it will take a lot for the Sussexes to rebuild an honest relationship with Harry’s family. Any documented ‘flickers of hope’ are likely related to family relations and less about the institution. Will Harry and Meghan be invited for Christmas? Very likely. Will they be asked to represent the crown anytime soon? I highly doubt it.”

In July 2021, Random House announced that Harry was writing an “intimate and heartfelt memoir.” At the time, it was reported that the publisher expected to release the book, currently untitled, in late 2022. However, there haven’t been any new updates concerning the book or its release date.

In May of this year, it was reported that the couple was working on a “juicier” documentary for Netflix about their life in Montecito. Reps for the Sussexes and the streaming giant declined to comment at the time. A producer told Page Six that the details “are up in the air.”

The Sussexes are also said to be concerned that Charles still hasn’t given the title of prince and princess to their two children Archie and Lilibet. Many assumed the change would have occurred as soon as Charles became king.

In 2021, it was announced that Prince Harry’s memoir was being released in late 2022.
(Joshua Sammer/Getty Images for Invictus Games Dusseldorf 2023)

Sources alleged that Charles is waiting to see what Harry’s book will include before making a decision. Royal author Katie Nicholl told True Royalty TV that Archie and Lilibet will likely receive titles if the Sussexes can rebuild trust with the king.

“I’m told that that is a very clear signal from the king,” she said. “He’s willing to give those titles, but it comes with a caveat, and that caveat is trust.”

Biden does not mention Russian arms…