Kim Kardashian, Justin Bieber and more stars speak out on the horrific death of Mahsa Amini in Iran 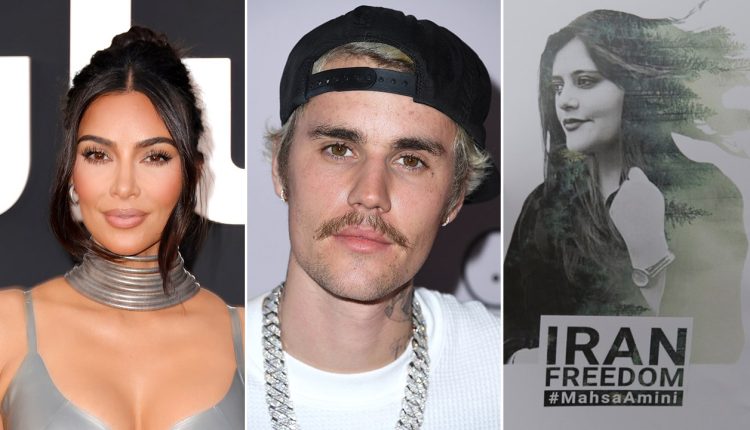 It has been over a week since the death of Mahsa Amini, a 22-year-old woman who was arrested in Tehran by the Islamic Republic of Iran’s morality police for not wearing her hijab properly.

Amini, who died in a hospital after falling into a coma, was allegedly beaten for not wearing a proper headscarf.

As a result, outrage has seeped through every crevice of Iran, prompting women to protest for their freedom. In the United States, some celebrities have advocated for justice in the death of the Iranian woman, while others have shared information with their followers.

Kim Kardashian chose to share that she was having conversations surrounding Iran and Armenia while getting a facial.
(Karen Minasyan/AFP)

Kim Kardashian is heavenly involved in criminal justice reform. She took to her Instagram story during a facial, sharing her sadness for what is going on in not only Iran, but also its neighboring country, Armenia.

The reality star, who is studying to be a lawyer, shared a broken heart emoji at the end of her statement. The 41-year-old is ethnically Armenian, and she also drew attention to the unwarranted attacks and killings of Armenians by Azerbaijan’s military. Kardashian has been outspoken about recognizing horrific acts of 1915 in Armenia by the Ottoman Turks as a genocide, which President Joe Biden did last April.

Kim Kardashian’s Instagram story mentions the devastation both Iranian and Armenian people are facing. Kardashian is half-Armenian and has been outspoken about the 1915 Armenian genocide.
(Instagram)

Bella Hadid, whose father is Palestinian real-estate mogul Mohamed Hadid, often speaks about the atrocities occurring in the Middle East. The 25-year-old model took to her Instagram to share a side-by-side photo – that has since gone viral in the wake of Amini’s death – showing the young woman attached to presumably a ventilator juxtaposed with a photo of her before falling into a coma. Hadid wrote, “Rest in peace #mashaamini You did not deserve this. Sending blessings to her family and loved ones.”

In addition to being an actress, Jessica Chastain has openly advocated for minorities and human rights.
(Michael Loccisano)

Jessica Chastain, the Academy Award-winning actress who is heavily involved in different throngs of activism, has shared multiple posts about the death of Amini, writing, “Her death lead to thousands of Iranians taking to the streets, demanding an end to violence and discrimination against women. Dozens of these protesters have been killed.”

In the days since Amini died, Iran has seen extreme turmoil and many deaths.

Chastain continued, “In an attempt to quiet the noise, journalists on the ground have been arrested, and the Islamic Public of Iran has shut down the internet. But the people of Iran will not be silenced. I stand with the women of Iran and will amplify their voices from afar. When one woman is attacked, it is an attack on us all.”

Padma Lakshmi, known best for her role as host on “Top Chef,” is also an American Civil Liberties Union (ACLU) Artist Ambassador for immigrants’ rights and women’s rights. She took to her Instagram to share a powerful video that compared the death of Amini in Iran to the death of George Floyd in the United States.

She wrote, “It doesn’t have to be this way. Religious extremism and subjugation of women under the guise of ‘morality’ is wrong in any country,” referencing the supposed “morality police” that arrested Amini.

Eva Mendes reposted an important message from a friend who she says is from Iran.
(Donato Sardella/Getty Images for New York & Company)

Eva Mendes reposted an Instagram from “one of the important women, sisters in my life who happens to be from Iran.” She asked her fans to “please read” the accompanying message from Massy Tadjedin, who described women in Iran banding together to fight the injustices they are facing.