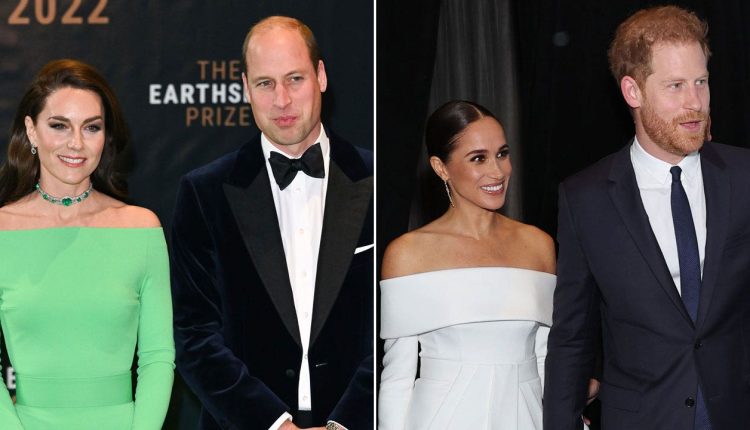 Despite their best efforts, Prince Harry and Meghan Markle are continuously upstaged by Prince William and Princess Kate Middleton.

As the royal family’s public appearances pick back up following the death of Queen Elizabeth II and the transition of King Charles III to the throne, Prince Harry and Markle have found a way to keep themselves in the spotlight.

The couple continues to make headlines as Prince Harry is set to release a tell-all book and the two participated in a controversial six-part Netflix series about their time as royals. “Harry & Meghan” will be released by the streaming platform on Dec. 8.

But royal experts tell Fox News Digital that Prince William and Princess Kate will continue to outshine them because “they are the monarchy.”

“Harry and Meghan are a novelty right now. They are royalty-adjacent, which is giving them some shine and some air time, but after Netflix and the book, what do they have to keep them at this level of attention?” Shannon Felton Spence, royal expert, told Fox News Digital. “They have created their entire career on putting themselves in opposition to the very institution which gives them any sparkle.”

“The Prince and Princess of Wales don’t have to play that game,” she added. “They are the monarchy. They will always be. That doesn’t wear off. The monarchy has stood for thousands of years. Celebrities rise and fall all the time. In 10 years time, Meghan may be doing a 90-minute holiday movie for Netflix. Catherine will never, ever be in that position.”

Holding the Diplomatic Corps reception on the same night as the Ripple of Hope Awards was a “master stroke” by the institution, Felton Spence told Fox News Digital. Markle and Harry were honored by the Robert F. Kennedy Human Rights organization at the awards dinner in New York City on Tuesday.

Meghan Markle, right, opted for an off-the-shoulder dress similar to the one worn by Kate Middleton in Boston on Friday.
(Getty Images)

However, Princess Kate stole the spotlight when she arrived at the Diplomatic Corps reception wearing a floor-length red gown accessorized with a tiara.

“The tiaras, sashes and pomp may not bump Harry and Meghan from the front pages just yet, but they cannot compete in the long-term,” she said. “The novelty wears off of celebrity and society. That’s one of the reasons they have to constantly reinvent and outdo themselves to keep relevant. You can’t outdo royalty.”

“Last week at the Earthshot [Prize] awards I was struck by how different royalty is to celebrity,” Felton Spence continued. “We assume they are closely related, but they aren’t. Royalty is in a different stratosphere, and that was evident at Earthshot where you could see the two side by side and see how the crowd reacted to them differently.”

Markle spoke at a fundraising event in Indiana days before, wearing an emerald-green gown. Princess Kate showed up to the Earthshot event also wearing a green gown, but she accessorized with a choker worn numerous times by the late Princess Diana.

Meghan Markle, left, and Kate Middleton, right, both use fashion as a way to honor the late Princess Diana – the mother to Prince Harry and Prince William.
(Archewell/Getty Images)

The Duke and Duchess of Wales responded to Meghan Markle and Prince Harry’s attempt to redirect the public’s attention by continuing “business as usual” during their appearance in Boston for the Earthshot Prize awards ceremony.
(Mike Coppola)

Kinsey Schofield, royal expert and host of the “To Di For” podcast, noted that Prince William and Princess Kate did respond to Meghan and Harry’s attempt to redirect the public focus ahead of their appearance at the Earthshot Prize awards ceremony.

“I think we saw the Prince and Princess of Wales’ response to Harry and Meghan’s diversions on full display in Boston,” Schofield told Fox News Digital. “They were confident, they were stoic, and it was business as usual. I think their strategy is that any response at this point is beneath them. They have a very important job to do right now, and that is maintaining the strength and love for the monarchy with the queen gone.”

Schofield explained that the continuous lack of response from the Prince and Princess of Wales contributed to the unhappiness of Markle and Prince Harry while they were working royals.

“Ultimately, I think that attitude, of not bending when the Sussexes would pitch a fit, is what made Harry and Meghan so unhappy,” she explained, “hence the hierarchy comments in the trailer. There is a real difference in maturity and duty between the two couples.”

Royal expert Hilary Fordwich noted that if Prince William and Princess Kate do respond to the Netflix “documentary,” they will do so with “dignity.”

“Prince Harry, in his pay-for-play Netflix documentary, stated that the ‘leaking and … planting of stories’ is part of a ‘dirty game.’ Indeed, not just his wording, but his timing, too, are either deliberately or shockingly coincidentally aimed at dragging the royal family into a dirty ditch,” Fordwich said. “How will the royals react now with the release of this docuseries dropping? Will they be goaded into a reaction? Maybe, maybe not, times are a-changing. So, let’s look at what we know and what we can count on.”

“One can count on them to be dignified,” she added. “Dignity is one aspect of the royals that the British and commonwealth at large treasure and the late QEII personified so well. If there is such a ‘game,’ the royals are in the long game and stand for all that is respectable and dependable in the long run.”

The Prince and Princess of Wales arrive at Buckingham Palace for the Diplomatic Corps reception.
(Getty Images)

The image of Princess Kate wearing the tiara during Tuesday night’s Diplomatic Corps reception at Buckingham Palace is a prime example of who the “real royals” are, Schofield told Fox News Digital.

“The Princess of Wales in a tiara is a reminder of the real royals. The ones that prioritize duty over dollars or drama. Catherine is the next queen consort, and I think people are very much looking forward to her time in the spotlight.”

“It’s a reminder that Catherine earned her place with patience and respect for the institution, and I think most people are forever grateful that Prince William is the heir.”

The tiara worn by Princess Kate was the Lotus Flower Tiara. She was first spotted wearing the headdress at a state banquet in honor of Chinese President Xi Jinping in 2015, royal fashion expert Miranda Holder told Fox News Digital.

The Lotus Flower Tiara, which is made up of sparkling papyrus and pearls, was originally a necklace given to the queen mother by King George VI, according to Holder.

“Tiara etiquette dictates that they should only be worn by married royal women, and wearing them before 6 p.m. is considered distasteful,” she said.

“They were originally meant to be worn so that the jewels were on the same plane as the face so that they could easily be admired as they reflected flattering light upon the wearer, however, they are occasionally worn across the forehead in a 1920s ‘bandeau’ style, made popular by Princess Diana with the Emerald Art Deco choker. But these days, the most popular positioning is further back on the head at a 45-degree angle.”

Kate Middleton speaks to guests during the reception. She wore a tiara – originally a necklace given to the queen mother by King George VI. The queen mother had it turned into a tiara, according to a royal expert.
(Getty Images)