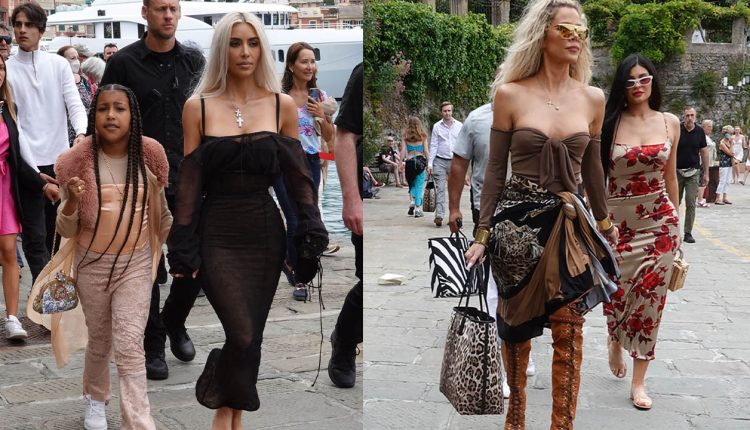 Members of the Kardashian family were seen boarding a yacht in Portofino, Italy to enjoy a pre-wedding lunch with Kourtney Kardashian and Travis Barker.

As previously reported, the famous family made the trip overseas to see the oldest Kardashian sibling get married for the first time. On Friday night, the family members in attendance all arrived to dinner in Italy in custom Dolce and Gabbana outfits.

Kim Kardashian and her oldest daughter North West were seen walking hand-in-hand towards the yacht. The “Skims” founder was seen barefoot as she had on a gothic, black dress with North, 8, in a rose-gold ensemble.

Kim Kardashian and North West were seen boarding a yacht in Portofino Italy on Saturday.
(Photo via Mega Agency)

Khloe Kardashian and Kylie Jenner followed. Khloe wore a skin-tight brown Dolce and Gabbana mini-dress as the “Kylie Cosmetics” founder was seen in a floral dress. Her daughter, Stormi, was also in attendance.

Khloe posted a series of pictures to her Instagram, showing that the family sailed over to the Italian fishing village of San Fruttuoso. “La Dolce Vita,” Khloe captioned her pictures.

Kourtney Kardashian was seen in a gothic Dolce and Gabbana look that featured a black and blue veil that was worn over her face. Her children – which she shares with her ex Scott Disick – made the trip to see their mother get married.

Khloe Kardashian and Kylie Jenner followed Kim as they headed out for a pre-wedding lunch in the Italian Riviera.
(Photo via Mega Agency)

Kourtney and Barker are exchanging vows in front of family and a few friends at the Italian castle, Castello Brown, TMZ first reported.

Barker’s children were also in attendance for the pre-wedding lunch, which his daughter, Alabama, documented on social media. The drummers Blink182 bandmates are expected to attend the lavish wedding.

The couple will reportedly host a reception for friends once they return to Los Angeles.

Kourtney Kardashian wore a black and blue veil aboard a yacht with her family and friends on Saturday.
(Photo via Mega Agency)

Kardashian and Barker are legally married in the United States and posed for photos at the Santa Barbara courthouse Sunday.

The drummer proposed in October after they dated less than a year. The two have their own children from previous relationships.

Tom Cruise Turns 60: How he conquered Hollywood and won over the royal family