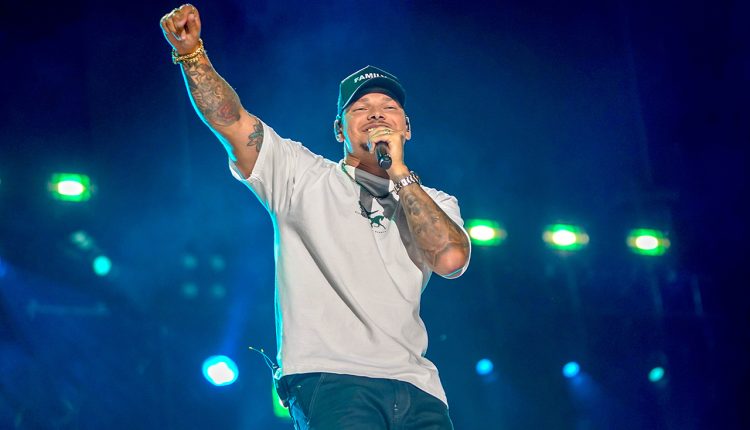 The show is known for its iconic performances over the years, including Whitney Houston in 1986, Beyoncé in 2003, Prince in 1991, Britney Spears and Madonna in 2003 and the ‘N Sync reunion in 2013. Brown’s appearance will be a mixed reality performance.

“It’s a huge honor to be a part of the VMAs,” Brown told Fox News Digital. “I feel like we all have moments and memories from watching the show’s performances and collaborations.

“It’s such an iconic show to be a part of, and I just feel really honored that they asked me. I can’t give too much away, but I can say that they can expect it to be something they haven’t seen before.”

KANE BROWN DEFENDS POLICE AMID PROTESTS, ACKNOWLEDGES BAD COPS ON ‘POWER TRIP’ ARE ‘OUT THERE’

Ariana Grande is one of the performers nominated for one of the newest MTV VMA categories, Best Metaverse Performance.
(Amy Sussman)

Brown’s mixed reality performance is not the only new addition to the award show this year. A new category has been added for Best Metaverse Performance, and the first nominees include Ariana Grande, BLACKPINK, BTS, Charli XCX, Justin Bieber and Twenty One Pilots.

The network is also launching The Video Music Awards Experience on Roblox in partnership with Super League Gaming, which will give fans the opportunity to attend a virtual red carpet, music- and dance-themed activities and many other immersive experiences.

“The MTV Video Music Awards has a long history of social and digital innovations, as we always look to meet our fans where they are,” said Amy Campbell, chief marketing officer, Paramount Media Networks and MTV Entertainment Studios.

“We are thrilled to work with our friends at Super League Gaming for the VMA Experience on Roblox, which will give our fans an exclusive opportunity to experience the VMAs like never before — in the metaverse.”

The metaverse experience will be available to fans starting Aug. 12, with new experiences and opportunities to vote until the night of the show.

Brown is excited for his performance to be one of the first in the show’s history to incorporate some of these mixed reality elements, which tie into the introduction of the metaverse. He is also excited to attend the event and be in the company of other musicians.

Kane Brown is excited to incorporate mixed reality elements into his performance and to see all the other performers.
(Kevin Mazur/Getty Images for CMT)

When speaking with Fox News Digital, Brown had a hard time deciding which artist he is most excited to see and which one he would like to collaborate with in the future.

“I don’t even know if they have revealed the whole lineup yet, but there are too many amazing performances that are happening to pick one,” Brown explained. “I love doing collaborations. I always feel like different artists always have different things to contribute, and it’s such a great space creatively when you can get in a room and learn and grow from each other and create something that their fans and yours are proud of too.”

While Brown is generally considered a country music artist, fans have been calling his latest song “Grand” his first crossover into the pop genre. He is appreciative of his fans for letting him express himself through his music and allowing him to explore all his creative impulses.

“When I first wrote the song “Grand” it was something that I was going through and wanted to inspire people to come out of the other side,” he said. “I know who I am and being able to be as creative as possible is something I really feel from the fans, and I love them for it.”

Brown is thankful his fans allow him to explore different genres in his music and express himself creatively. He hopes people will listen to his music and get to know him better as a person.
(Dillon Sherlock/CBS via Getty Images)

Brown wrote the song during a dark time in his life in the hope others would be able to relate to his experiences and feel less alone.

“You have these moments when you’re writing where you hope other people that might be going through the same thing can relate to it and feel like they aren’t alone in what they are going through or to have hope,” Brown said. “I also think music is amazing in that it can get people through times but also makes you remember moments and helps people celebrate. You can hear a song and instantly be taken to a time or a place.”

“Grand” is a single off his upcoming album “Different Man,” which he describes as a snapshot of the past few years but also about where he is at the moment. He hopes this album will make fans feel like they got to know him better.

“Someone told me the other day, ‘This is a real coming-of-age album,’ which was really flattering to hear,” Brown explained. “I just want people to listen to it and feel like they know more about me, what I am about and that they can relate something in their life to it.”

When asked whether he thinks his two daughters will follow in his musical footsteps, he said, “It’s so fun to see how much music is a part of their lives,” and that he is often “taken aback by how much of a singing voice” his two-year-old daughter already has.

Brown, pictured here with wife Katelyn Jae, is already impressed by the musical talents of his two-year-old daughter, admitting music is a big part of their lives.
(Jason Kempin/Getty Images for CMT)

Fans can watch Brown perform live on the MTV VMAs Sunday, Aug. 28, and can listen to his new album after its release Sept. 9.