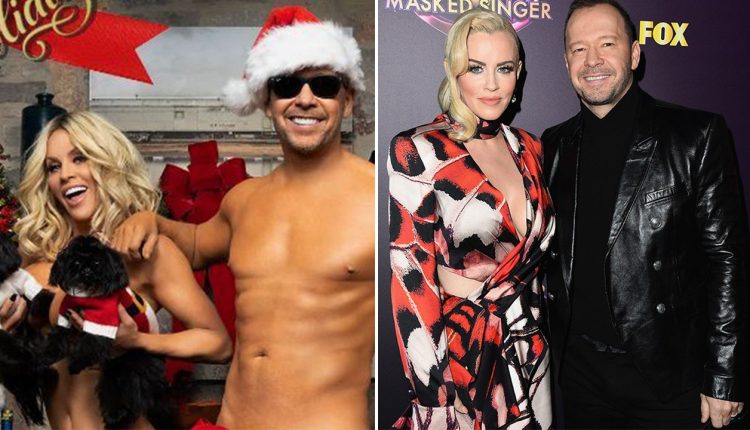 Jenny McCarthy and Donnie Wahlberg have no problem baring it all.

Jenny, 50, and her husband Donnie, 53, appeared naked for the former Playmate’s beauty brand, Formless Beauty. The cosmetic company is releasing a nude collection of lip glosses, which prompted the risqué campaign.

“It was fun to bare it all with my husband for this shoot,” McCarthy shared with People magazine. “I definitely have a thing for chestnuts roasting and large packages adorned with red ribbons.”

Mark Wahlberg’s older brother shared that he was happy to take part in the photo shoot while he was “in shape.”

“I love having fun with Jenny, and she asked me right before ‘in-shape New Kids Donnie’ became a ‘doughnut-eating ’Blue Bloods’ Donnie,’ so the timing was perfect,” he shared.

McCarthy announced the launch of her cosmetics brand last year. Her latest collection of lip glosses builds on the initial release of three shades in 2021 and two others earlier this year.

The couple autographed 2,000 of their nude holiday ad for early bird costumers. Every purchase also enters the customer into a drawing to win a FaceTime call from Jenny and Donnie on Christmas Day.

The founding member of New Kids on the Block met the “Masked Singer” panelist while playing a game of truth or dare years before they married in 2014.

In January 2021, Wahlberg discussed his and McCarthy’s bond to Fox News Digital, sharing that the two approach their marriage the same way they do their work.

Jenny McCarthy said it was “fun to bare it all” with her husband, Donnie Wahlberg.
(Jon Kopaloff)

“That’s how we are. We just always reference each other. And I appreciate what you said about us being a successful couple, especially in Hollywood, but we don’t think of ourselves as a Hollywood couple,” Wahlberg explained before expounding on his point.

“We don’t live in Hollywood. You know, we don’t really think we’re Hollywood. We just think we’re real people. I mean, I grew up… we both grew up really poor Irish Catholics – her in the Midwest, me on the East Coast. We live in the Midwest. Her family is still there, my family’s still there on the East Coast. And, you know, Hollywood is just where we have to go to work sometimes.”

Jenny McCarthy and Donnie Wahlberg tied the knot in 2014.
(Reuters)

The “Blue Bloods” star continued: “I don’t think we think of ourselves as Hollywood or part of Hollywood in the traditional sense. I think we’re just entertainers who entertain. And it’s one of the reasons we live in the Midwest, you know. We made a commitment to be together for the rest of our lives and to raise our kids in a very… in an environment like we grew up in. And that’s not really Hollywood.”