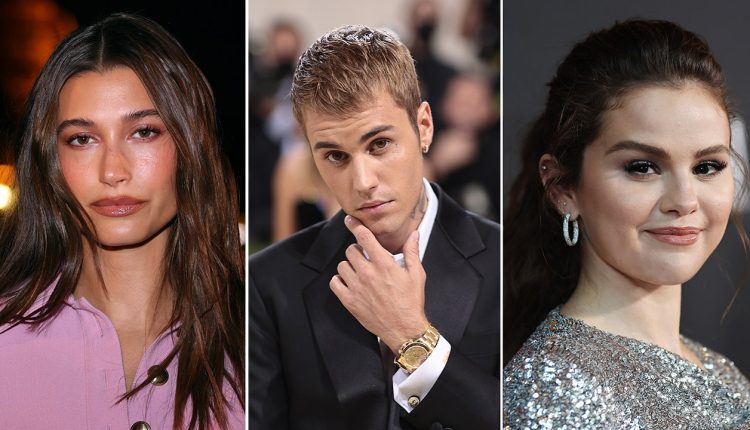 In a new interview on the “Call Her Daddy” podcast, Hailey Bieber spoke candidly about the narrative that she “stole” husband Justin Bieber from Selena Gomez.

“A lot of the hate and the perpetuation comes from, ‘Oh you stole him,'” she told the podcast’s host, Alexandra Cooper. “I guess maybe that just comes from like the fact that they wish he had ended up with someone else, and that’s fine, you can wish that all you want, but that’s just not the case,” speaking of Bieber’s fans dislike of their union.

Hailey explicitly stated, “I can say, period point-blank, I was never with him when he was in a relationship with anyone.”

The whirlwind relationship, which saw Hailey and Bieber married at the young ages of 21 and 24, respectively, was expedited.

In a new interview, Hailey Bieber discusses how she did not ‘steal’ Justin Bieber from Selena Gomez.
(Pascal Le Segretain/Dimitrios Kambouris/Amy Sussman)

The relationship drew significant heat due to the extenuating circumstances of Bieber’s tumultuous relationship with Gomez. Bieber and Gomez were photographed hanging out in November 2017. Six months later, Bieber was photographed with Hailey, who he also had a romantic past with. By July 2018, the two were engaged, and in September 2018, they had a courthouse wedding.

Throughout the interview, Gomez was always referred to as “Justin’s ex” and oddly never identified by her name, but Hailey made it clear who she was talking about by giving specifics. It is the timeline and overlap, or lack thereof, that frustrates her most – and the confusion and false narrative that has been highlighted as a result of Hailey’s relationship with Bieber.

“The timeline also that I think is sometimes in question is us getting together and us getting engaged, and him having been spending time with his ex before…I understand again how it looks from the outside, and there’s a lot of perception there, but that was a situation where I know for a fact that it was the right thing for them to close that door. They were not in a relationship at that time, but of course there’s a very long history there, and it’s not my relationship,” she said.

Justin Bieber and Selena Gomez had an on-off relationship for several years, which finally dissolved in 2017.
(Noel Vasquez)

Speaking on her relationship with Bieber, Hailey said, “I know what had to happen for that to come back together in a healthy way…I think it was the most healthy, mature decision that he could have made, and I respect that. As a woman, I would never want to get into a relationship with someone and be engaged to them and be getting married to them and think in the back of my mind, ‘I wonder if that was really closed for you?’ and like – I know for a fact that the reason we were able to get back together is because it was very much, completely closed.”

The scrutinization and misconceptions surrounding her relationship have also been difficult for the 25-year-old model. At the 2021 Met Gala, Hailey and Bieber attended the red carpet together. In photos captured from the event, and a video that consequently went viral, one might assume that Bieber is consoling Hailey. In that viral video, an onslaught of fans can be heard shouting Gomez’s name as Bieber and his wife pose for photos.

On the “Call Her Daddy” podcast, Hailey Bieber opened up about what really happened on the red carpet of the 2021 Met Gala.
(Dimitrios Kambouris/Getty Images for The Met Museum/Vogue)

Of the moment, Hailey recalls, “I could hear everyone screaming, and again, I think there’s a certain part of you that has a numbness of just like – I was like really surprised. I could kind of hear it, but I didn’t know if that’s what was really going on until I saw the video after. The whole thing of everyone being like ‘Oh he’s trying to tell her not to cry.’ That was not true. It wasn’t making me cry….I felt like I had something in my eye…See that’s just what goes to show you how out of context things can be seen, when he’s like trying to help me, I’m like, ‘I feel like something is in my eye, do you see something in my eye?’…and he’s like ‘No, no, no you’re good.'”

Although Gomez, Bieber and Hailey have all stayed incredibly mum on the timeline of their relationships, things have since changed.

In addition to the interview Hailey gave, Gomez’s documentary, “My Mind & Me,” is slated to be released in November, where she is likely to address her highly publicized relationship with Bieber.

Selena Gomez’s documentary “My Mind &amp; Me” will be released in November, and covers the past six years of her life.
(Richard Shotwell)

Gomez also went on to pen the number one hit “Lose You To Love Me,” which is perceived to be written about her relationship with Bieber.

Despite years of being entangled in headlines together, Hailey shares that she truly respects Gomez, and even spoke to the Rare Beauty creator after she married Bieber.

“It’s all respect, it’s all love…That’s also why I feel like, if everyone on our side knows what happened and we’re good, and we could walk away with it with clarity and respect, then like, that’s fine.”

Despite things seemingly being swept out from under the rug and onto the door step for Hailey and Gomez, the public is still at odds.

Hailey and Justin Bieber just celebrated their four-year wedding anniversary. Bieber says that is proof that they made the right decision to get married when they did.
(Axelle/Bauer-Griffin/FilmMagic)

Hailey, who has been subjected to extreme harassment, told Cooper that her husband never asked Gomez to help stop the backlash.

When Cooper asked if something as insignificant as Gomez commenting a heart on one of Hailey’s TikTok videos would help the hate dissipate, Hailey said, “I would never expect someone to do that for me. She doesn’t owe me anything. I don’t owe – neither of us owe anybody, anything, expect respect. I respect her, a lot. And I think that, like, there’s just no expectations. If that was something that she felt was necessary, then that would be amazing…I respect her, there is no drama personally.”